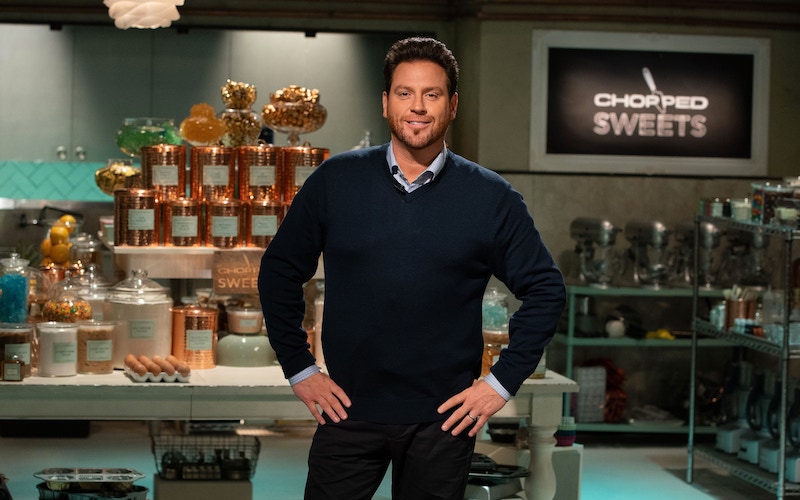 Chopped is spinning off a new series that will keep the mystery baskets but have chefs create only desserts. Chopped Sweets will be hosted by regular Chopped judge and Best Bakers in America host Scott Conant.

This news follows last fall’s Chopped: Sweets Showdown tournament, which was hosted by Ted Allen and a typical five-episode stunt like other themed episodes and tournaments Chopped has aired over the year.

While Chopped has sometimes left the studio, such as with its “Grill Masters”, it hasn’t really had a true spin-off. Even Chopped Junior is hosted by Ted Allen and filmed on the same set.

It comes in the wake of many dessert-themed reality TV competitions, including Netflix’s Zumbo’s Just Desserts, never mind shows from years ago, such as Food Network Sweet Genius, hosted by Ron Ben-Israel, and Bravo’s Top Chef: Just Desserts.

Recommended for you: Chopped’s origin story starts with an insane twist: a dog eating losers’ food

How Chopped Sweets will work

The new series will use the same general format as the long-running Food Network show: four chefs, three rounds, and a $10,000 prize.

Chopped Sweets premieres Feb. 3, with new episodes airing Mondays at 10. It’ll have “a rotating panel of culinary experts” as judges, in addition to Conant.

Food Network president Courtney White said in a press release that the spin-off will be “pushing some of the most talented chefs to their limits to create beautifully crafted desserts from eccentric mystery ingredients.” Scott Conant brings his culinary and judging acumen as host to all the action, making Chopped Sweets a welcome addition to the Chopped family.”

The network previewed the kinds of challenges Chopped Sweets will have, starting with its premiere, which has a theme connecting all the baskets:

“In the premiere episode the chefs find adult beverages in every basket as they must figure out a way to balance booze with pastry perfection. A special beer and a frozen treat are part of the puzzle in the first round, while a potent pop and a festive frosting meet in the second basket. In the third and final basket, will the larger than life cocktail win over the judges who are thirsting for truly fantastical desserts?

Other episode themes feature the chefs taking on carnival ingredients as they set out to make whimsical desserts and creating miniature sweet concoctions that prove to be delectable little works of art. And see what happens when the chefs learn they will have to make breakfast-themed desserts each round with the baskets full of reminders of the most important meal of the day, including a coffee drink, a cleverly designed candy and waffle dough.”