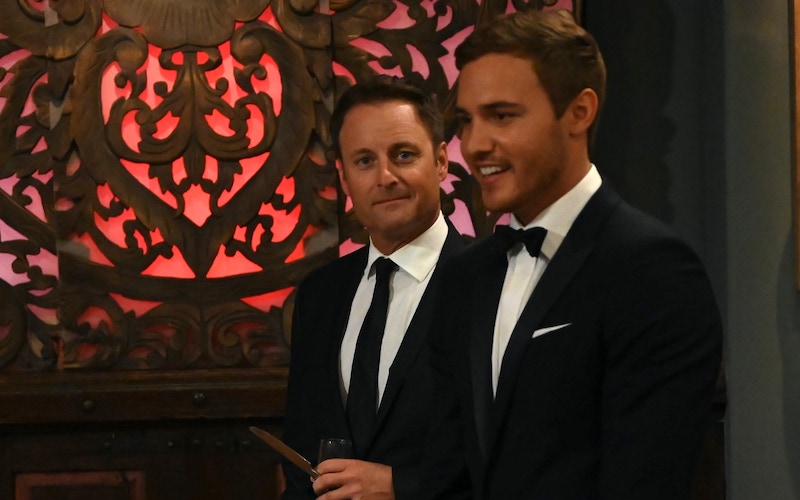 Watch out, Peter Weber: Chris Harrison has a surprise for you! (Photo by John Fleenor/ABC)

I recently re-learned that the sound an eagle makes in television and movies—that gorgeous, drawn out screech—is actually the sound of a red-tailed hawk. Actual eagles make noise that sounds more like a baby bird demanding food and/or laughing, and someone decided that such a sound was too embarrassing for our national symbol.

I share this because tonight’s The Bachelor premiere starts with that familiar not-an-eagle sound, over a shot of the American west. Except there’s no bald eagle, or red-tailed hawk, in sight. And this is a good metaphor for The Bachelor, an empty lie of a reality show, not that I have strong feelings about it. First, though, let’s get to the good part and watch shirtless Peter Weber wash his plane with a hose, and while wearing only jeans:

After the not-an-eagle noise, The Bachelor season 24 opens with a flash-forward. “Before you do what you’re about to do, there’s something you should know,” host and head bro Chris Harrison tells Peter. It appears to be time for the final rose ceremony—like, final final.

“There’s something I just found out—all of us just found out,” Chris Harrison says, and it’s not that he really should have taken acting lessons to learn how to sell these lies better, because when he delivers this sort of “news,” the insincerity drips out of his body and forms puddles of soullessness.

“I’m not sure how all this ends, so I just wanted to give you a heads-up,” Harrison says. Thanks bro.

We see Peter walking around, saying, “I feel like I’m going to pass out right now,” which may or may not have had anything to do with the producers’ bombshell twist.

A second later we see Peter, lying in a bed and looking at the ceiling, saying, “That’s just, like, the last thing I needed to hear.”

But why is it something we needed to hear in the opening moments of the season premiere? Why is this finale so dramatic? And why not just let us discover it then instead of seeing part of it now?

Whatever happened, it has eluded even Reality Steve, who has not yet reported anything about the finale or offered spoilers about what all these flash-forwards mean.

Starting a narrative in the middle and flashing back is nothing new, but flashing forward to the finale of The Bachelor—even a few context-free seconds of what usually is the last episode—feels both crassly manipulative and kind of exciting, so it’s perfect for this show.

The super-tease preview that follows this focuses almost entirely on the women and largely on drama between them; Peter is far less of a presence. There is a dramatic moment toward the end, when his mother Barbara tells him, “Don’t let her go. Don’t. Let. Her Go. Bring her home to us.”

What could that be? Who could Peter’s mom be talking about, and why is she crying and acting as if a woman is a sack of potatoes Peter forgot to pick up at Target? Why does Peter say, at the chronological beginning of the season, more than once, “I’m going to go find my wife,” as if he lost her at Target?

I don’t have answers. As to the flash-forward, my working theory right now is that this season is more boring than usual, so starting at the end is a way to keep viewers invested. Maybe that final rose ceremony isn’t even the actual final episode of the season, and there’s more manufactured drama after that?

The bulk of the three-hour episode—Three. Hours.—was pretty flat, starting with the limo greetings, which have passed the point of embarrassing (Katrina: “You’re going to fall in love. With my hairless pussy. Cats.”).

The show seems to have also passed the point at which it winks and nods, even about its own misogyny.

After Kiarra showed up in luggage, pushed down the soaking-wet driveway by a pretend baggage handler, Chris Harrison popped out and commented that her bit was “some David Copperfield shit.”

Chris Harrison then said, “We should cut her in half later.” Peter, because he knows what he’s there to do (appease the Disney gods), replied: “We should.”

No one will be killed, of course—we’re at least a few years away from that level of producer desperation—but the women will be fed into the meat grinder that is The Bachelor, starting with the producers’ most dastardly twist since, well, the last one.

In the premiere, they brought Hannah Brown back twice, to try to make all this much more interesting. The first time, a sort of hand-off between seasons, was charming, but the second?

“Why is she here?” one of the new women asked when Hannah Brown showed up the second time, and if the new person doesn’t know the answer yet, she’s in for a rough landing. (PILOT REFERENCE)

“This is so weird,” Peter said, because he’s now just catching on too. Hannah told him, “I’m really happy for you, but it’s just a lot.” She cried, they cuddled, they had an emotional conversation.

At one point Peter asked, “What would you say if I asked you to come be part of that?” Hannah said, “Maybe.”

Spoiler alert: She doesn’t. That’s not much of a spoiler since she was on Dancing with the Stars during the fall, which was in production and broadcast live at the same time The Bachelor was being filmed.

“I don’t know what the fuck I was doing. I’m really fucked up,” Hannah said at one point. And here we thought ABC had capitalized on Hannah’s popularity only by casting her on Dancing with the Stars, but they managed to use her for so much more.

So we’re left with a season premiere that begins with the show basically begging us to watch to the end of the season, and ends with The Bachelor caring more about someone he’s most definitely not going to be dating this season.

The final flash-forward—Lost was more coherent than chronology in this episode—was to next week’s episode, which was mostly a montage of women crying. Perhaps they’ve all just figured out what show they’ve agreed to be on.