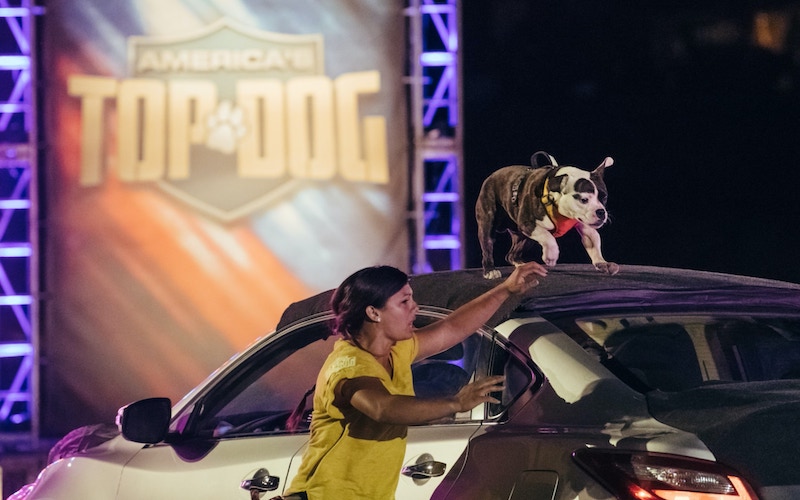 America’s Top Dog brings K9 dogs from Live PD, other law enforcement agencies, and civilian dogs so they can compete against each other on a special obstacle course.

It’s like American Ninja Warrior for dogs, and it had a successful start: Last week’s premiere had about 1.2 million viewers, which Cynopsis reported was A&E’s “best non-crime launch in over three years” in both total viewers and among people 25 to 54.

At the Television Critics Association summer press tour last July, the show’s producer, host, and some of the participants answered TV critics’ questions about the show, and provided insight into its production. Here are some highlights.

Where did the idea for America’s Top Dog come from?

Live PD, and the popularity of the K9 units.

A+E Networks President of Programming Rob Sharenow told TV critics that “during the course of more than 220 episodes of Live PD we’ve learned a lot. One thing that became eminently clear immediately was that there’s a small group of specialized law enforcement officers on the show that are really popping for viewers. They have their own fan clubs, fan pages—so we decided to give them their own show.”

The officers he refers to are the dogs themselves: “some of the most highly trained, skilled officers and at the same time they’re without a doubt the cutest,” Sharenow continued.

Showrunner Holly Wofford said the show would be “highly story-based,” allowing viewers to get to know the dogs and their trainers even more.

She gave a specific example about a dog that was at the press conference: Minion. He “was paralyzed by a tick bite just a month before the competition,” Wofford said. Minion’s owner, Amanda Caldron, “had applied for the competition” and “we definitely wanted her, but then she called us one day saying Minion’s paralyzed. We don’t know if he’s going to survive. And then a month later he recuperated and was out there on the course and killing it.”

How was the course designed?

The obstacle course and challenges were “designed specifically to cater to and lead into the skill sets that these highly trained dogs already have,” showrunner Holly Wofford said.

Executive producer Dan Cesareo said constructing “it was a massive operation—building the three courses, which are far larger than just about anything on television, the entire infrastructure for just human beings and then the separate support system for the dogs.”

How long did it take to film?

The show filmed last year, and each episode took one day to be produced.

Wofford said that “was a luxury and ample” time.

The dogs “have a lot of time on and off,” she said, noting that “the time spent on the course is actually very limited compared to the time that they have to relax and drink and eat and all that fun stuff.”

How did the dogs interact with each—and a reality show crew?

The dogs “were with their handlers at all times,” Wofford said. “There were no issues” with other dogs.

She did say that the production made sure there would be no issues: “We did take precautions to make sure that we allowed space between the dogs, [and] between each of the teams, but also with our crew.”

The people filming America’s Top Dog also were careful about their interaction with dogs.

“We briefed our crew to make sure that there was safety all times, and there was,” Wofford said. “It was tremendously successful and safe and a challenge, but it was choreographed and worked out just fine.”

How does the competition work?

Five teams compete in each episode: four police dogs and their partners, and one civilian team.

There are three rounds in each episode, and teams are eliminated after every round. The “top dog” of the episode will receive $10,000 and $5,000 to give to an animal-related charity.

The winning dog moves on to the final episode, which will crown “America’s Top Dog,” which comes with a cash prize of $25,000.

Why are there civilian dogs competing?

The civilian dogs are referred to as “an underdog team,” though showrunner Wofford said, “There’s probably nothing underdog about them. They’re highly-trained dogs and teams.”

Amanda Caldron, whose dog Minion is one of the civilian dogs, said, “That’s actually what I’m hoping to encourage. As a dog trainer, we’re trying to constantly find jobs for pet owners and their basic pets at the house for things that they can do, because dogs are inherently designed to assist mankind, and they do genuinely love a job.”

“I’m hoping that this whole show is a big encouragement to dog owners everywhere to really go out and do something extra fun with their dogs and find what it is that individual dog really loves and excels at,” she added.

Curt Menefee, the host of America’s Top Dog and a sportscaster who hosts Fox NFL Sunday, said the show “highlights that you may not be able to teach every dog everything, but you can teach every dog something.”

He said that viewers will find that “some of it is about the speed and agility, but some of it is just about the scent work and the smell and those kinds of things. You find the dogs that aren’t German Shepherds or Belgian Malinois that can be just as good at that.”

Did the dogs’ trainers give them special training for the show?

The trainers were asked if they “train[ed] them any differently knowing you were going into a competition,” and Amanda Caldron said “yes.”

“Everything’s very contextual to the dog. So if you’re used to operating at just the field or just in one room, then the dogs don’t generalize those expectations and they don’t understand it,” she said. “You have to take them everywhere essentially and really fine-tune all of those skill sets and advance on all of them.”

How did the dogs’ trainers participate?

Sideline reporter Jamie Little said that while the dogs are competing, there was “true teamwork” between the dog and its trainer.

She gave an example: “Some dogs don’t like to go in the water. They’re not around water ever, so we had an element—it’s called the Splash Down. And Mattis was the perfect example. He wasn’t a water dog, but to go through the competition, you had to do the Splash Down. So, what does [Mattis’ handler] Mark do? He jumps right in the water with him and it’s a team competition.”

Trainer Nick White, who serves as an expert on the show, told TV critics that the show is about more than just the obstacles. “A lot of it’s really about the teamwork and the bond that that handler shares with his dog,” he said. “It’s not so much about the training and the hours put in, but it’s just about the bond and love and the trust that the team has with the dog, and that’s what I really love about the show’s format.”

Executive producer Dan Cesareo said, “each trainer has a different approach and some of them approach the course very calm and cool. And some are incredibly amped up. The dogs feed off of that in different ways and are successful at different levels because of it.”

Do the dogs know they’re competing?

The panelists at TCA were asked “Do you think the dogs know they’re in a competition?” and they had a clear answer:

How do they know? Wofford said: “The drive, the energy, the passion, the like drive to work. You just see them switch on.”

Amanda Caldron, whose dog is Minion, added, “There’s no doubt about it that dogs have this intuition with us. You see it in every field that they work in—especially service dogs. But when we have all this adrenaline going, they know and they eat it up and they just—they work that much harder when they feel those stakes kind of at hand, I believe.”

What kind of craft services did America’s Top Dog have?

At the end of the press conference, a TV critic asked, “What’s your craft services like?” That’s a reference to the snacks and other food available for actors on set.

Wofford said that “we allow the handlers to bring their own food and treats and we also provided extra in the event that it was necessary.”