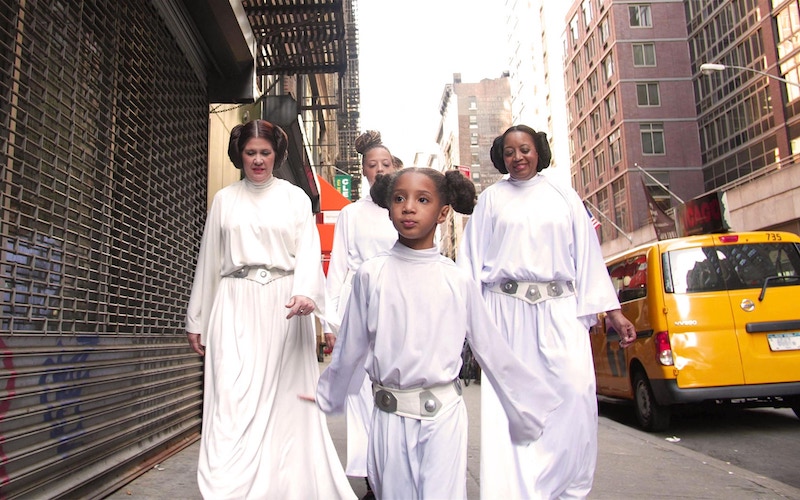 A scene from the "How We Carrie On" episode of Looking for Leia, an online series about a diverse group of Star Wars fans (Image via Syfy)

Good Monday morning! Usually I look forward to these two weeks at the end of December—which encompass Christmas and New Year’s Eve, and this year, Hanukkah—because there tends to be a break in television, a much-needed breather.

Not this year: That’s because 2020 and the new decade are starting with strong. More than 40 (!) reality shows in the first week of the year alone (!!). So while this is the final weekly preview of the year, get ready for what’s coming on Jan. 1: a lot of reality TV.

Between The Masked Singer and the forthcoming Lego Masters, Fox has quickly become the place for fun reality TV that I’m looking forward to watching.

That includes the final show of the year that I’m truly excited about: Fox’s version of Flirty Dancing (Fox, Dec. 29 at 8, then Wednesdays at 8), on which strangers each learn a dance routine, and then meet for the first time while dancing together.

If you haven’t seen the UK version, watch these clips—it’s so impossibly charming!

Fox’s version is adding a twist (insert eye-roll emoji) where each person will dance with two strangers, and pick the one they like best. Hopefully, that won’t erase its charm.

Holiday marathons, the return of a classic reality competition, and more

This week, Terrace House: Tokyo 2019-2020 continues (Netflix, Dec. 24), with Netflix teasing that “Kenji and Risako’s story reaches its conclusion, [while] Ruka faces a choice” and another person joins the house.

The Great American Baking Show: Holiday Edition comes to an end after the holidays, on Jan. 2, and tonight a Food Network competition from back in the day when Food Network wasn’t all competitions returns.

Food Network Challenge is being revived (Food Network, Mondays at 10) with host Ian Ziering. It looks like this first, short season will focus on cake baking, instead of also having savory chefs compete, as in the original.

If you’ve been wondering what Kevin Hart has been doing ever since he dropped out as host of the Oscars because of the content of his past jokes, and his refusal to really acknowledge the pain they caused, Netflix has a series for you: Kevin Hart: Don’t F**k This Up (Netflix, Dec. 27), which promises “unprecedented access to his life over the past year.”

Bravo has decided to burn off The Real Housewives of Orange County‘s reunion before the year ends. It started last Wednesday, and continues Monday and Thursday at 10.

The Star Wars fans who get a lot of attention in the media are the fanboys, especially the toxic ones, but there are many other people for whom the franchise means a lot.

A new series, Looking for Leia, tells the stories of women and non-binary people who are super-fans of the Star Wars universe. The seven-episode series, which consists of short episodes, is now on Syfy.com and YouTube.

Its episodes include “What We Build,” which follows “women with no previous building experience who immersed themselves in 3D printing and coding to build screen accurate, fully functional droids,” and “How We Carrie On,” in which “Carrie Fisher is remembered and celebrated through stories of women and non-binary fans,” according to Syfy.

Eve Plumb is returning to HGTV with a pilot of her new show Generation Renovation (HGTV, Tuesday, Dec. 24, at 11), on which “she teams with preservationist Brett Waterman, star of DIY Network’s Restored, and her husband and renovation partner Ken Pace to modernize dilapidated cabins and cottages that have been in families for generations,” according to the network.

Duff Goldman hosts a special Cake Off that has the subtitle “New Year’s Eve,” though it’s airing two days earlier (Food Network, Sunday, Dec. 29, at 9). On the special, “bakers must capture change through the years in their innovative New Year’s Eve cakes, but there’s a catch—the cakes must also transform from old to new,” Food Network says.

NatGeo is airing repeats of several of its shows this week, including a re-broadcast of Free Solo (Thursday at 9).

And NatGeo WILD starts a 12-day marathon of The Incredible Dr. Pol today, with new episodes airing at 9 p.m. every night. It ends Jan. 4.

Travel Channel is squeezing in one more paranormal show: Ghost Loop (Travel Channel, Fridays at 10), on which people do ghost things.