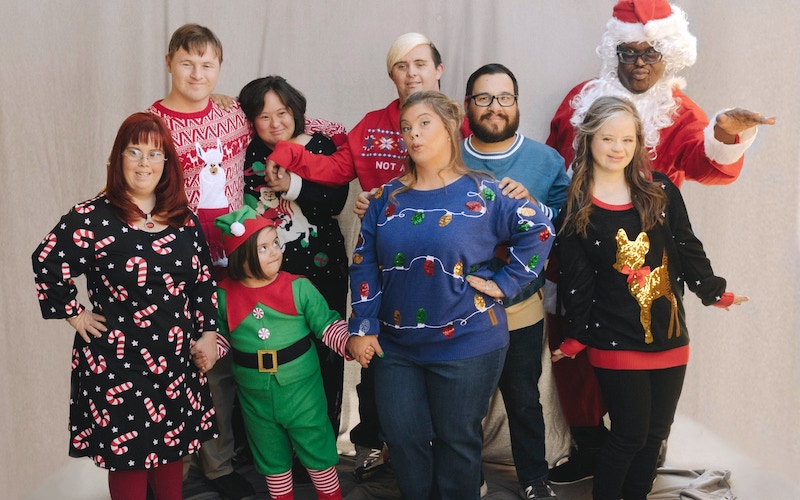 Good Monday morning! As Christmas, Hanukkah, and the New Year approach, new shows and new seasons continue to premiere—and this week, that includes a special that ends a long-running series.

There are also several fall finales this week: The Voice (NBC, Tuesday at 9); The Masked Singer, which will unmask all the remaining celebrities (Fox, Wednesday at 8); Temptation Island (USA, Thursday at 9); and Survivor: Island of the Idols, which has its usual three-hour finale (CBS, 8 p.m.), though this season’s conclusion will be anything but typical, starting with the pre-taped reunion that’ll end a season that should have just been cancelled.

Born This Way ends forever not with a new season, but a one-hour reunion special (A&E, Wednesday, Dec. 18, at 9).

A&E says “Elena, John, Megan, Rachel, Sean, Steven, Cristina and Angel and their families gather to spread cheer and reflect on their personal growth across the four seasons” on “A Very Born This Way Christmas.”

I haven’t seen the special, so I can’t exactly recommend that, and essentially, the show ended with the condensed season four in 2018.

But I can recommend its four seasons—which are streaming on Amazon Prime—and I think it deserves more than just a quick send-off a year and a half after its last season aired.

The Emmy-winning show—it won the first-ever reality TV casting award, in addition to Emmys for best unstructured reality show and for outstanding cinematography—was also groundbreaking because its stars all live with Down syndrome.

Its executive producer, Jon Murray, the co-creator of The Real World, told me a few years ago that networks rejected the show because executives couldn’t imagine anyone wanting to watch people with Down syndrome. “They just felt like people wouldn’t watch. It was like, Oh Jon, this is really good that you’re doing this, this is a really good thing, and I hope you find a network,” Murray said.

As Murray told me in 2016, “I had a distant relative who back in the ’30s and ’40s was institutionalized because they had down syndrome. What a waste that was of that person because, as you see on this show, these people contribute to their families, they contribute to their community.”

And the cast has also contributed to reality TV history, and hopefully the door remains open for reality shows to cast people who may not be identical to every other reality show cast member, but still have rich lives that can make for compelling television.

HGTV is going to squeeze every possible hour of television that it can out of the Brady house, so here comes A Very Brady Renovation: Holiday Edition (HGTV, Monday, Dec. 16, at 10) has Ree Drummond and Jasmine Roth “team[ing] up with the Brady Bunch cast to whip up 70’s-inspired treats” and making “retro DIY decorations,” according to HGTV.

This weekend, Molly Yeh hosts the Ultimate Hanukkah Challenge (Food Network, Saturday, Dec. 21, at 9), a one-hour special that will be judged by Duff Goldman and Sharone Hakman. It’s the network’s first Hanukkah-themed competition, and presumably, if it does well, there will hopefully be more than one episode next year.

Also getting their forever homes are people who get help from Jonathan and Drew Scott with new episodes of Property Brothers: Forever Home (HGTV, Wednesdays at 9), on which they renovate families’ houses.

The man responsible for the creepy “Dear David” Twitter thread stars in a new series, Trending Fear (Travel Channel, Fridays at 11), which follows Adam Ellis and two others as they “help others understand and escape their own nightmares,” Travel Channel says.

Competitive dog groomers were followed for a year for the new documentary Well Groomed (HBO, Tuesday, Dec. 17, at 9).

Meanwhile, Attla (PBS, Monday, Dec. 16, at 10) follows the dog sledding champion George Attla, who mentors his 20-year-old grandnephew and “embark on a journey to compete in the world’s largest dogsled sprint race, one that has seen a steep decline in Native competitors,” according to PBS.

Laurel Canyon (EPIX, Monday, Dec. 16 and 23, at 9) is a documentary that “celebrates the music of Joni Mitchell, Jackson Browne, Linda Ronstadt, The Eagles, The Mamas and The Papas, Carole King, Crosby, Stills, Nash and Young, James Taylor, The Doors, Frank Zappa and more,” according to EPIX.

Don’t F**k With Cats: Hunting an Internet Killer (Netflix, Dec. 18) is a doc series about the convicted murderer Luka Magnotta, who broadcast his crime on the Internet; previously, he broadcast his killing of cats, hence the title of the series.

Finding the Way Home (HBO, Wednesday, Dec. 18, at 9) follows families, social workers, foster parents, and “children who have found their way to loving homes after experiencing the traumas of child trafficking and institutionalized life,” according to HBO.

After the Raid (Netflix, Thursday) follows what happens after an immigration raid in a Tennessee town.

Lidia Celebrates America: The Return of the Artisans (PBS, Friday, Dec. 20, at 9) follows the chef and author as she “journeys across the country to host a new television special—exploring how food artisans and artisanal crafts are gaining momentum in the U.S,” according to PBS.