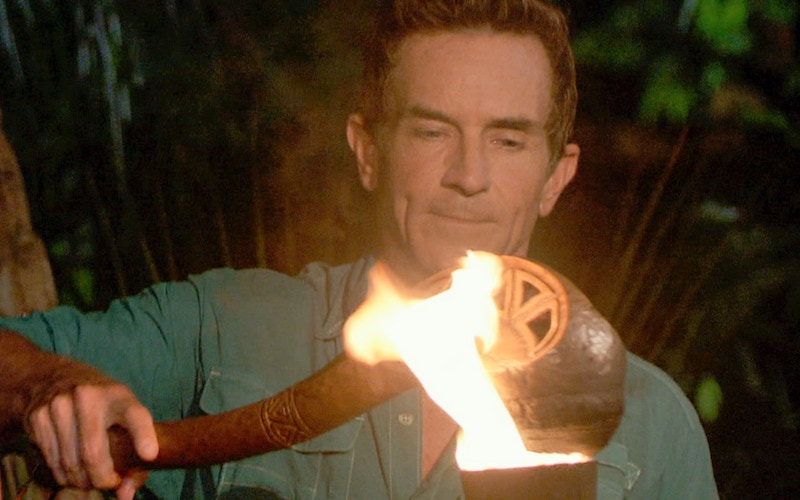 Rather than continue to snuff torches, Jeff Probst should have snuffed this entire season of Survivor. (Image from Survivor via CBS)

When Survivor: Island of the Idols was announced, it seemed ridiculous, with those giant Rob and Sandra bobbleheads. The season has given us fun commentary from Rob and Sandra and an exceptionally strong cast, but that’s been overshadowed by Dan’s behavior and the response to it.

How could that happen? How could a 19.5-year-old broadcast network reality TV show—the best of the best—fail this badly?

For Vulture, I wrote about this season, giving a broad overview of what’s transpired, and offering a theory about why the production failed to protect its players and crew.

My theory is simple, and connects to something I wrote almost seven years ago: RIP Survivor, murdered at 26 by Jeff Probst.

I wrote that piece—and its hyperbolic headline—after watching the episode in which Brandon Hantz was sent home with an impromptu vote on the beach.

The events of that episode made me sad because it suggested that Survivor was moving in a different direction, one I didn’t like as a fan

What does that have to do with Survivor: Island of the Idols? Two things, actually. First, this season had the first-ever ejection—or did it?

Back then, the players voted Brandon out, but according to one of them, the producers actually ejected Brandon but forced a fake vote for the cameras.

When Russell Hantz suggested on Twitter that Dan Spilo was not the first person ejected from the game, that Brandon was, one of Brandon’s fellow players, Corinne Kaplan, confirmed that. She wrote, in part:

“CBS loves to rewrite history to garner ratings. Brandon was ‘fired’ and we were told we had to vote him out at the challenge. So we forfeited it because why bother competing then.”

While I didn’t know that back then, but what I’d watched really bothered me. I wrote, “Jeff Probst’s deplorable decision to tear into Brandon, masking that as concern, was insane. At the height of Brandon’s rage, Probst massaged Brandon’s shoulders, both attempting to calm him down and keeping him away from the others, and then brought up Russell Hantz. Probst decided to turn into a talk show host and/or gotcha journalist, trying to get a reaction out of his subject.”

And that, I wrote, was “Probst at his worst, not being a stand-in for viewers but someone who’s creating the game in his own image based on his own values. That is not the Jeff Probst I love.“

I argued that “this is the direction in which Survivor has been moving,” including “drama over game play and character development.”

Since then, we’ve had some great seasons, players, and game play, and I’ve been grateful for those. The show has gotten in ruts with challenges and idols, and let twists fizzle out. And it’s had some not-so-great seasons, and awful things have happened.

Most significantly, in these years since Survivor: Caramoan, we’ve seen many examples of story taking precedence over the actual game, from the increasingly inane themes like Edge of Extinction (which just prevents people from being eliminated and allows more story time) to the Big Moments.

This season got the latter at the expense of its players.

I’m glad Survivor has shown us much as it has, but I also wonder if the network and production thought we’d be praising it for being so transparent instead of being horrified by what the show allowed to happen while it got its #MeToo storyline.

As Dan Fienberg wrote in The Hollywood Reporter, “During the past month, we’ve seen conclusive proof and reminders that Survivor is not a social experiment or the real world in microcosm. It’s a game for $1 million and it’s not equipped at all to handle much of what people are forced to handle in the real world.”

I agree completely, and I struggle to see how Survivor recovers from here: as a show I trust, or as a show I find entertaining. This is the first time in 39 seasons that I haven’t watched all the episodes, and the usual Wednesday-night excitement has evaporated.

Read my full piece at Vulture: How Could Survivor Have Screwed Up This Badly?

Also recommended for you: Jeff Probst’s insufficient apology and response, and more on Survivor’s failures