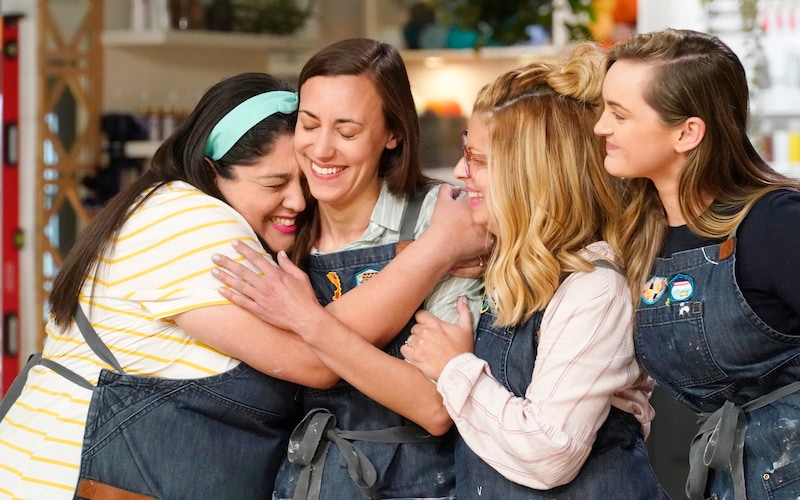 “I hope that each of you is better for this experience and I hope that the friendships that you made here are deep and sustaining. I know I’m better off for having spent time with all of you,” Nick Offerman said. He was talking to the cast of Making It at the end of the finale, but his words certainly applied to me, too.

Amy Poehler added, “We’re very, very lucky.” Yes, we are: for having a show like Making It, which in its second season was as close to perfect as any reality show I watched this year. I’m better for having spent eight hours in the company of these talented contestants and ebullient hosts.

Let’s get the bad news out of the way first: Ratings are way down from last summer, though I hope that is no surprise at NBC, considering that season one followed NBC’s top reality shows, America’s Got Talent and The Voice, and this season burned through eight episodes in 10 days. Also, the general caveat: overnight ratings matter less now, and especially with the entire season airing over just 10 days, I imagine/hope ratings will grow when DVR ratings are added in.

Each challenge offered the makers an opportunity to show off their talents and creativity, and turn their personalities into tangible objects.

There are so many projects I will remember, from Jessie’s incredible periscopes in her shed (never mind that floor!) to Lilly’s “Bauhaus butterfly bakery,” as Simon Doonan referred to it. I would love to have all four of those sheds in my back yard, and I while I don’t know how this is physically or logistically possible, I hope the makers got to keep their sheds.

I certainly don’t feel capable of creating anything remotely close to what the makers created this season, and am just fine with appreciating their work. But I also liked that Amy and Nick returned frequently to the idea that we, the people on our couches, can do something, anything, even if it’s not as spectacular as the projects and crafts that Making It’s contestants created.

Amy Poehler and Nick Offerman remain reality TV’s best hosting duo, and I hope they are once again Emmy-nominated, and hope they actually win.

I love every time they:

“Why do we have to send people home?” Amy asked during one episode, and Nick replied: “I hate this show.” I know he’s joking but I certainly dislike that part of the show: Making It’s judging is still a major buzzkill.

It’s not the judges, Simon Doonan and Dayna Isom Johnson, who are charming and fun when they visit the makers and name-drop Etsy, but the actual judging feels so discordant. One thing Making It needs to still borrow from The Great British Bake-Off is a discussion of the work, moderated by the hosts.

I also still do not understand why Eagan Tilghman went home for his New York City alleyway cubicle design, and I’m still heartbroken by it, especially since that episode really established the growing friendship with Floyd Davis, two introverts from different places and at different points in their lives who connected over their shared experiences.

The bonds and friendships were evident throughout the series, whether the makers were helping each other or hugging after finishing a project. “I know we’re in the semi-finals and it might seem like we would have competition or something, but it really just feels like we’re all competing against ourselves,” Jessie said during the penultimate episode.

Mostly, it was just sad to lose contestants, watching their family be broken up, though Making It once again reunited them at Amy and Nick’s pretend house, this time to be part of a band singing a song that won’t leave my head. 🎶”Oh Making It, it’s tough / But it’s all we know how to do.” 🎶

The show was a nail gun loaded with happiness shot straight into my head, or a less-violent metaphor. With its rolling hills of fake bright green grass and its bottomless supply closet, it was a literal happy place, offering a non-stop supply of goodness.

Will Making It be coming back for a season 3? I hope so: the world needs it. For now, I will take comfort in the gift we’ve been given with two seasons of the show, and both seasons are on Amazon and Hulu to be re-watched any time I need it.