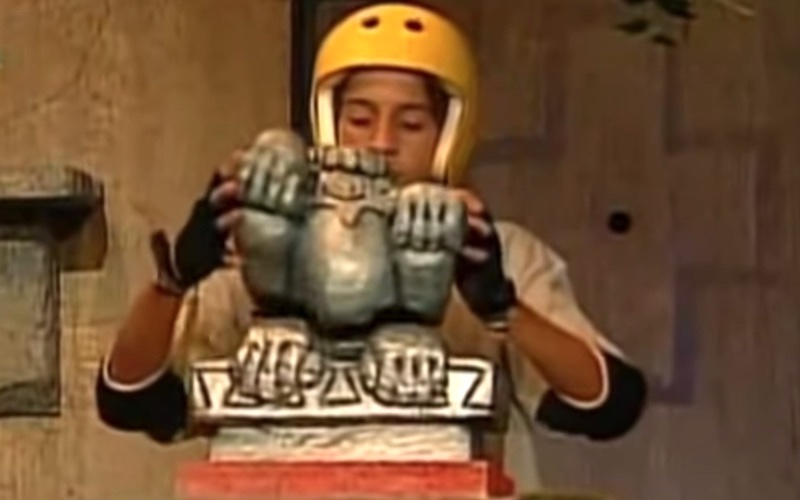 A Legends of the Hidden Temple contestant assembles the silver monkey during the Temple Run part of the show, which is returning on Quibi.

Legends of the Hidden Temple, the 1990s Nickelodeon game show that had teams of kids competing to run through a set designed like a temple from Indiana Jones and complete challenges, is returning, though a lot will change, and may actually be a version for adults.

The production company behind the original series—which went on to produce iconic reality TV shows from The Mole to The Joe Schmo Show—was Stone/Stanley, and after its founders parted, it became known as Stone and Company Entertainment, which is producing the new version along with Nickelodeon. A press release says the new version is “Based on the game show … by David G. Stanley, Scott A. Stone and Stephen R. Brown.”

In the release, producer Scott Stone said, “Bringing back Legends for Quibi is a dream come true. I have been so lucky to be part of this defining millennial show, and now there is a defining millennial platform to go with it. I couldn’t be more excited.”

The show has been rebooted by Quibi, a forthcoming streaming service founded by Jeffrey Katzenberg that will stream all its shows to mobile devices in “quick bites”—episodes that are 10 minutes or less—and is currently throwing a lot of money around Hollywood.

Quibi’s content is being produced exclusively for mobile devices, and producers working with Quibi have told me that involves producing two versions with the same footage: one that’s vertical and one that’s horizontal, so Quibi users will be able to watch with whatever screen rotation they’d like, or even switch in the middle of an episode.

There’s no premiere date for Legends of the Hidden Temple yet, but Quibi launches on April 4, 2020. It will cost $5 a month or $8 for an ads-free version.

Quibi’s announcement said nothing about a host or announcer. The original was hosted by Kirk Fogg, and its narrator—in character as Olmec, a talking temple rock face—was Dee Bradley Baker.

On the original, six teams with two kids each—designated by a color and an animal: the Purple Parrots, Red Jaguars, Blue Barracudas, Orange Iguanas, Green Monkeys, and Silver Snakes—competed in three rounds.

The first round required the teams to cross a moat (i.e. pool); the slowest two teams were eliminated. In the second round, teams answered trivia questions based on a story they were told by Olmec. The two teams that answered three questions right went on to a final physical challenge, which changed episode to episode.

The winning team won the right to wear awkward helmets and mouth guards as they raced through the temple to retrieve an object that was central to the story told earlier by Olmec.

While the set itself remained relatively consistent, the location of objects and the path through it changed, thanks to doors that’d open and close when kids completed a challenge in the room.

The team had three minutes to retrieve the object and exit the temple.

While the original was filmed on a soundstage at Nickelodeon’s studios at
Universal Studios Florida, the new version will be filmed in an actual jungle.

Quibi promises that the new version “will preserve many of the favorite original elements of the show—the Moat Crossing, Olmec and the Temple Run—but will see them ‘grown up’ for an audience that’s grown up along with them. The entire set will be taken out of the studio, into a jungle and scaled up with tougher challenges and bigger prizes on the line.”

That’s kind of the opposite approach that Nickelodeon’s reboot of Double Dare took; it faithfully reproduced the original, although with a new host and some modern tweaks.

I’m really excited to see this, though I’m not encouraged by those changes, nor do they feel necessary to me. Part of the appeal of the original was the soundstage temple maze: it was like being on a movie set or a Disney attraction, definitely fake but still immersive.

And I can’t quite imagine those kinds of challenges and that three-story, 12-room temple in an actual jungle. How do you even create rooms? I just keep picturing something that is actually outside but looks phony, like the badly I’m a Celebrity…Get Me Out of Here.

Stone and Company also produced a recent Nickelodeon game show, Paradise Run, that was like a mini-Amazing Race set at a Hawaiian resort. It had fun challenges but as a show was unwatchable because of how obviously coached the kids were, down to the scripting of their lines, in all interview segments. (Watch this for a few examples; I hope they do not take the same producing approach with Legends of the Hidden Temple.)

All of this is probably my aging-related anxiety: even though I have no actual desire to return to my teenage years when that original series was airing, it’s fun to reconnect with the wonder and awe that a show like this produced.

I even remember my annoyance at the Temple Guards, which seemed like blatant producer interference! But thankfully there were the Pendants of Life, which were early immunity necklaces and allowed the kid to stay in the temple if they encountered a guard.

Even watching clips on YouTube, I was still excited to watch the contestants navigate the temple (and get lost in it), even if the challenges seemed a lot easier than the challenges I’m used to seeing after 30 years of shows from Road Rules to Big Brother.

So, I could not be more excited to see what comes of this. And I do appreciate that Quibi seems to know its audience for this show—and perhaps the audience of kids in the 1990s will be the contestants of the 2020s. That’s what this paragraph in the press release suggested to me:

“So get your knee and elbow pads ready, because Quibi will soon be looking for superfans to play. But beware, this action-packed competition will test your adventure skills at a whole new level. Enter at your own risk—the choice is yours and yours alone.”