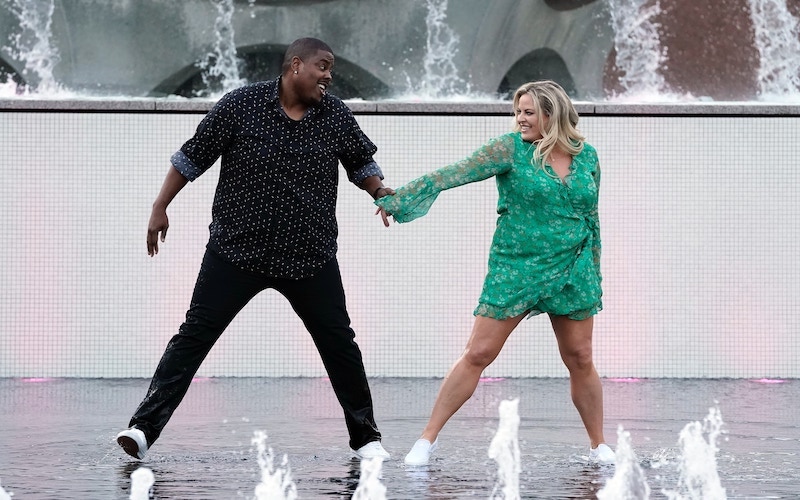 Two complete strangers, both single, both looking for love, see each other for the first time: they make eye contact, walk toward one another, and then their normal physical movements suddenly become animated, as if they were controlled by a puppeteer’s strings.

These meet-cute dances on Fox’s Flirty Dancing are so effervescent you can practically feel the carbon dioxide bubbles popping in your face as the couple dart around a cinematic Los Angeles location, music playing. And suddenly: they’re done, and so is the show, because it doesn’t have much else to offer.

I emphatically recommend watching these first dances; I also strongly recommend using your fast-forward button through the rest of the show.

As this strange courtship happens, the frame narrows, with the top of the screen and bottom of the screen sliding toward each other, changing the aspect ratio.

The effect is to make this moment more cinematic, and the dances are beautifully staged and filmed, with camera operators gliding around with the couple as they dance through dramatically lit, well-chosen locations.

Yet the reality of the image’s shift is that the bottom and top of the frame are ungracefully sliced off, and into the trash go the the dancers’ legs and sometimes the tops of their heads. Who needs to see legs when people are dancing?

That’s a good metaphor for what the show does too often, which is to add something that may be well-intentioned, but doesn’t quite work.

The hour-long episodes of Flirty Dancing (Fox, Wednesdays at 8, with a special Sunday at 8 preview) are essentially two 22-minute episodes in one, each with a single person dancing with two different potential partners.

The first dance doesn’t show up until 13 minutes into the first episode, and that time drags. Host Jenna Dewan meets with the single person and talks to them about their search for love, blah blah blah, and then introduces them to a choreographer and their team.

Here’s where the show starts its unnecessary detour from the Channel 4 format that it’s based on: The UK version uses Ashley Banjo as both host and choreographer, while the US version’s host, Dewan, focuses more on getting to know the cast members while choreographers handle the dances.

If you’re looking for detailed dance rehearsals, they are not here, with less attention being given to practicing than an average Dancing with the Stars clip package.

While they have clearly rehearsed in these Los Angels locations (including The Hollywood Bowl and the “Urban Light” sculpture at LACMA), as behind-the-scenes clips reveal, the show does not take us to the location until it’s time for the actual dance.

In episode one, choreographers Tyce Diorio and Travis Wall—who will be familiar to So You Think You Can Dance viewers—both create one active and one slow routine.

Having two contrasting dances makes sense. Yet in the first episode, one dance is vastly inferior to the other.

In a behind-the-scenes video, Travis Wall says “there’s always usually a more emotional or romantic one, [and] a sexier, more flirty one.” Guess which one just doesn’t work as well for a show called Flirty Dancing?

The big American twist—one single person dancing with two different people, and then choosing one—is another attempt by Hollywood to turn dating into a competition, to make it about comparing two people instead of exploring options.

In the premiere, both singles have lots of chemistry with both of the people they each dance with. Any rational human being would just go on a date with both people, because it’s unlikely that, after one dance, they’re going to go to a bank to open a joint account.

But this is reality TV land, where we have to have a winner and a loser.

That loser is swiftly dispatched with after saying something positive about the experience or themselves, so it’s not a huge bummer, just completely unnecessary.

Meanwhile, Flirty Dancing wants to argue that connection during flirtation is the same as a love connection, that it’s also possible to divine a person’s soul and complexity in that first initial flash (spoiler: it’s not).

So the show spends an too much time establishing the single people’s needs and quirks—like one woman’s child-like voice, or a man’s social awkwardness—and then does nothing with them, because the entire point of this is to watch two people dance, and not say a word.

Fox has made Flirty Dancing into a lightweight competition layered on top of an attempt to make these dances mean something, and thus meanders away from its title, which contains everything this show needs: flirty dances. Those dances are so exuberant they each left me beaming, and they are enough on their own.