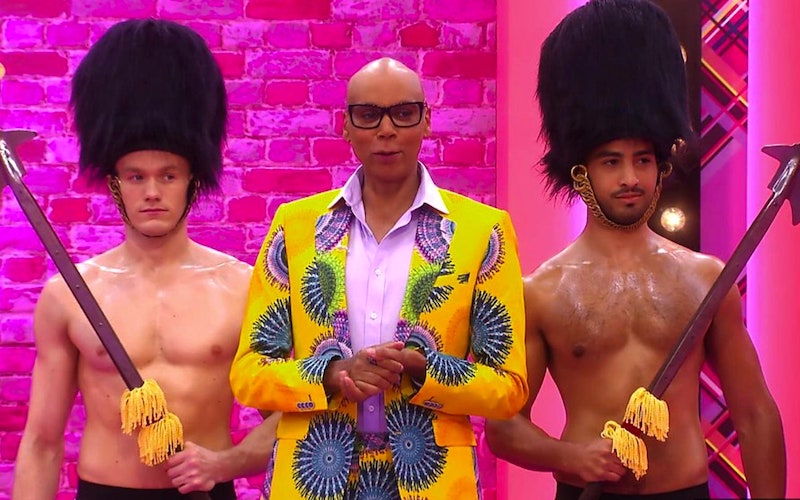 RuPaul’s Drag Race UK may have technically been the product of the Logo/VH1 show’s format being exported to the UK’s BBC Three, but it was so similar to the 11 regular seasons of Drag Race that preceded it, that it simply felt like queens from the UK being imported into the American version.

But to quote one of the season’s breakout stars, Baga Chipz, this season was “much betta!” than many of those that came before it.

Exporting the format resulted in a few minor alterations, but exactly nothing of substance changed, from RuPaul’s lines to the style in which it’s edited. It was a VH1 show on the BBC, with British contestants and guest judges.

There were a few light updates: the Pit Crew became the Brit Crew, though they were still well-oiled for our pleasure, and the runway set had new design elements and is fully symmetrical, not cut in half for budgetary reasons.

Most significantly, there were no prizes or sponsorships because the BBC is public television, so Ru-Peter badges (i.e. pins) replaced them. (The pins were a reference to the prizes given out by the long-running children’s show Blue Peter.)

The season felt somewhat like Drag Race All Stars—at least, it had a similar format, with a smaller cast, fewer episodes, and a finale during production. I prefer all of those things, especially the lack of a live finale.

I’m not a fan of Drag Race’s live finales, especially because they film multiple endings so that the live audience won’t be able to leak the outcome. Thus, what we end up watching is someone pretending to win, not actual surprise or delight in the moment.

Update: The Vivienne said in an interview with Gay Times that they also filmed two endings even though there was no live studio audience, and this she didn’t know she won until she watched the episode: “we always film two crownings and I genuinely couldn’t have called it. I couldn’t have called it when we were watching it until Ru said my name.”

While RuPaul’s Drag Race UK stuck pretty rigidly to the formula, down to the final challenges (write a verse, learn choreography, appear as a pretend guest on RuPaul and Michelle Visage’s podcast), it never felt stale, thanks to its stars.

While RuPaul’s Drag Race UK lacked expansive originality and creativity in the show, it did have 10 outstanding contestants, who brought more talent and charm than several all-star seasons. I am already missing them, and the eight-episode season flew by.

At first, I was skeptical that I’d even be able to watch the whole season: In the middle of the first episode of RuPaul’s Drag Race UK, the group I was watching with decided to turn on subtitles, because we were missing words, phrases, and jokes.

That didn’t help much; there were references and jokes left and right that I missed—which is understandable, and on me. That faded quickly with episode two, although I’m sure I missed some things.

A few of the other choices, though, were questionable, notably the casting of Scaredy Kat, who’s 19 and so new to drag she’d never done a lip sync performance. That’s not a baby queen, that’s an embryo.

Is that the best the UK has? Did it cast all 10 drag queens in the entire United Kingdom and just run out? Thankfully, RuPaul/the show dispensed with her quickly, and even by then I was warming to her.

Scaredy Kat’s sexuality—she first identified as not gay and in a relationship with a woman, but later identified as bisexual—was interesting, and not the only way in which a contestant challenged boundaries (there may not be such a thing in drag; there is such a thing on Drag Race), including Crystal’s prominent chest hair.

Mostly, though, these queens excelled at the very narrow types of things that Drag Race asks its contestant to do: act, sing, dance, improvise, and, of course, get into fabulous drag.

From Snatch Game to weekly runway looks, everything they did seemed elevated.

The season gave us one of the best-ever Snatch Games, thanks to incredibly strong performances that immediately became some of my favorites of all time: The Vivienne as Donald Trump, Blu Hydrangea’s bizarre and hilarious over-sexualized Mary Berry, Baga Chipz’s bizarre Margaret Thatcher, and Sum Ting Wong’s Sir David Attenborough.

Both acting challenges gave the queens a lot to do—and gave Baga Chipz the instantly iconic moment of thinking Michelle Visage helping out with a line (“Much better”) was a compliment, not a cue.

Not everyone was perfect, but even when they weren’t, they were fun to watch. Had they not been great at these kinds of challenges—as the U.S. contestants sometimes are not—it would have been a rough ride.

The queens had a few testy moments, but were mostly loving and supportive, and that gave the season a congenial feel. When Cheryl Hole was eliminated fourth, she acknowledged that she’d made it far without ever winning; when Baga Chipz was eliminated in third place, she spent all her time talking about the two finalists who’d just beaten her.

Season two has already finished casting, and I’m already looking forward to Drag Race UK season two, even more than the next American season. The United States of America may have given the world Drag Race, but the United Kingdom gave the franchise a brilliant new standard for just having a bloody good time with drag and reality TV.