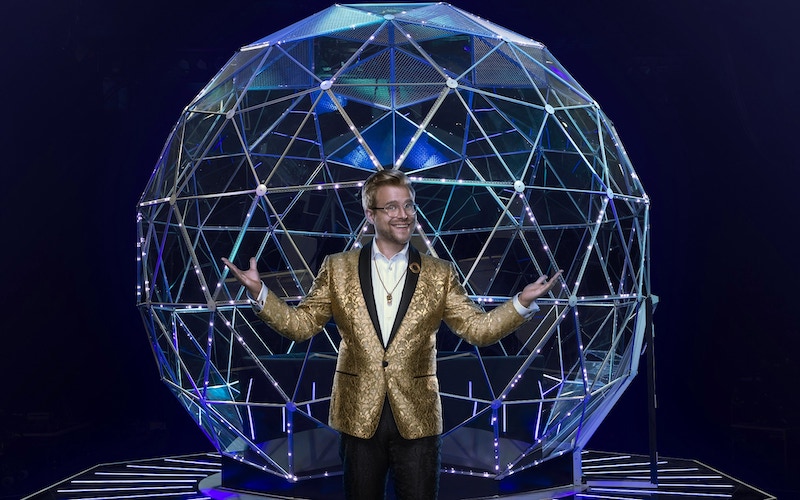 Adam Conover, the host/maze master of Nickelodeon's The Crystal Maze (Photo by Nickelodeon)

The cult favorite competitions series The Crystal Maze was revived as a full series in the UK in 2017, and it’s coming to the United States in January 2020 on Nickelodeon, which announced a premiere date yesterday along with the news that Adam Ruins Everything star Adam Conover is its host.

He takes the role of “Maze Master” that was originated by Richard O’Brien, and will be “guiding one family team through physical and mental challenges set within an elaborate labyrinth of four giant and immersive themed zones: Aztec, Eastern, Futuristic and Industrial,” according to a press release.

Nickelodeon’s executive vice president for unscripted content, Rob Bagshaw, said in the release, “We are delighted to welcome Adam Conover into the Nickelodeon family as our first Maze Master. His wit, warmth and pizazz are the perfect attributes to guide families through the exhilarating adventure that is The Crystal Maze.”

And Conover said, “As the Maze Master, the only thing that gives me greater joy than tormenting our adventurers with devious games is handing out giant cash prizes to the lucky few who manage to escape the challenges inside the crystal maze. This show is the ultimate challenge for families, proving that you have to work together if you want to win, and that’s a fact.”

In Nickelodeon’s version—which was filmed this past summer “on the original set in Bristol, England,” Nickelodeon said—teams will consist of family members.

In the original, team members were strangers; in the UK’s 2017 reboot, they’re teams of people who know each other.

When The Crystal Maze will premiere, and its prize

The Crystal Maze will premiere Jan. 24, airing Fridays at 7 p.m.

The grand prize for each episode is $25,000, and is earned by grabbing gold foil swirling around inside the Crystal Dome, which is basically a stylized money machine/cash booth.

They earn time in the Dome by individually completing challenges. Each successful challenge is another five seconds grabbing foil.

A few years ago, urged by some of you, I watched the 1990s version, episodes of which are floating around the Internet, and found it to be “weirdly watchable,” “like Legends of the Hidden Temple without the urgency.”

The trailer for the Nickelodeon version certainly does have shades of Legends of the Hidden Temple, a wonderful series, along with escape room games.

“In each episode, the youngest family member takes on the role of team Captain. The successful completion of escape-room style challenges are rewarded with a ‘time crystal’ granting the family five seconds in the centerpiece final zone called the Crystal Dome. The more crystals gathered throughout the game, the more time each family has for a dramatic clock countdown challenge inside the iconic Dome for a chance to win up to $25,000.”

Recommended for you: Why Adam Conover’s humor is so effective