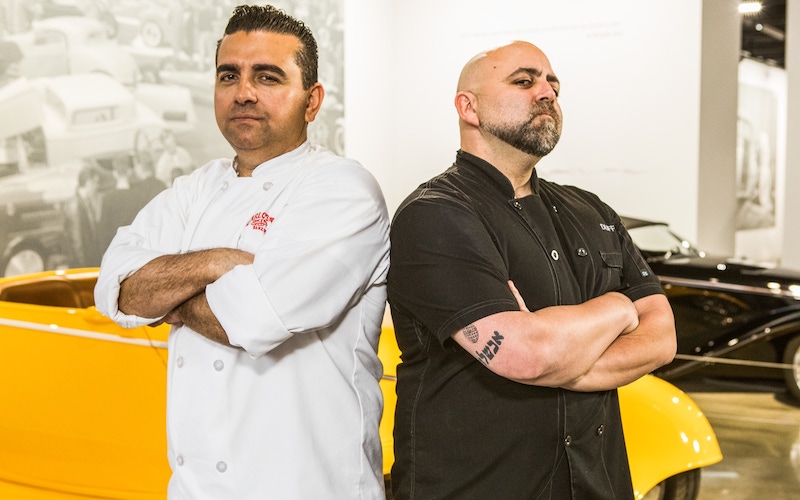 Buddy Valastro and Duff Goldman will face off again in Buddy vs. Duff season 2 (Photo by Food Network)

The bizarre competition series that had Food Network’s Ace of Cakes Duff Goldman compete against TLC’s Cake Boss Buddy Valastro “in an epic baking battle” is returning for a second season because it ended up as the highest-rated show on the channel this year.

That’s amazing, considering that if Buddy vs. Duff was a cake, it would have been flour, eggs, sugar, leftover Halloween candy, and Crystal Light put into a blender and then cooked in a microwave. Yes, it was a virtually inedible disaster of a reality competition.

In a press release, Food Network’s president Courtney White said, “Audiences were captivated by the real-life rivalry between Buddy and Duff, the extraordinary intensity of the competition and the exquisite works of art created by these two titans of baking. As the biggest names in cake, they have a lot at stake in the competition and will lay it all on the line to prove they are the best in the business.”

That may not be believable, but people did watch: Food Network says the show was its “highest-rated series of 2019.” Think about that! Of the plethora of shows on Food Network, this one had the most viewers? Really?!

Food Network says it “reached over 14 million viewers,” though how it calculates that isn’t clear. One impressive metric is that the show “grew ratings more than 40% for its timeslot” among people ages 24 to 54.

While Buddy vs. Duff showcased their very different approaches—Buddy’s bombastic cakes versus Duff’s detailed creations—it was the opposite of joyful and fun, more like bizarre and melancholy.

That leads me to attribute the popularity not to the quality of the show, but to the celebrity of its stars.

There will be eight episodes for Buddy vs. Duff season two, which will premiere in March. The new season is starting production this week.

I hope it’s very different from season one, which felt flimsy, like the producers were making it up as they went, and the competition parts were unbelievably sketchy, with the two bakers having the exact same numerical scores going into the finale.

In my review of Buddy vs. Duff, I linked to an interview in which Duff said that “throughout the filming of the show and stuff, we became good friends.”

I would love to see that show: two new friends, challenging each other in friendly competition.

But I also wouldn’t be surprised to see Buddy win season two, so now they’re even and there can be balance in the Food Network family’s cake corner.

And since that wreck of a first season was actually successful, I can also see Food Network not wanting to change a thing. Warm up the microwave: it’s time to bake more ratings.