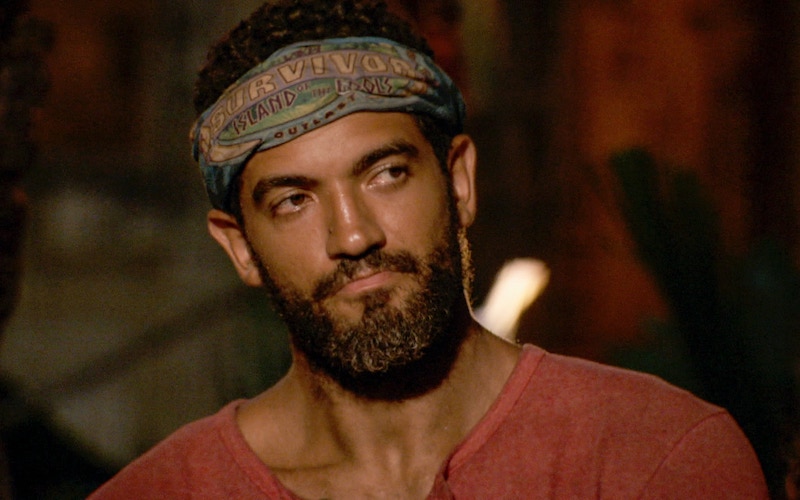 Aaron Meredith during the Survivor Island of the Idols episode 10 Tribal Council. (Image from Survivor via CBS Entertainment)

Several Survivor player interviews have challenged the version of events we saw on Survivor: Island of the Idols and heard about from showrunner Jeff Probst, including about the off-camera meeting producers held to address Kellee’s complaints about Dan’s unwanted touching.

First, both Missy Byrd and Aaron Meredith declined to be interviewed by EW’s Dalton Ross, which he said was “This is the first time in 39 seasons this has ever happened.”

The Survivor cast contract requires the contestants to do interviews or other promotion at CBS’s request (for details, see the bottom of page 2 and top of page 3).

It sounds like CBS is giving the cast agency this season, allowing them to decide whether or not they want to be interviewed, and how (i.e. via e-mail).

Considering the many ways production failed the cast, I think that’s a very good decision on the part of CBS and/or its publicity team.

In those interviews, both Aaron and Missy give details about the production meeting that makes it seem very different from the version described by Jeff Probst and the actual episode.

What the players remember about the production meeting

First, let’s refresh our memories. During episode eight, the merge episode, when Kellee breaks down upon realizing she’s not alone in being uncomfortable by Dan’s unwanted touching, the episode said this, in on-screen text:

“The following morning, the producers met with all the players, both as a group and individually.

They were cautioned about personal boundaries and reminded that producers are available to them at all times.

Based on the outcome of those discussions, the game continued.

In addition, producers met privately with Dan, at which time he was issued a warning for his behavior.

Producers continue to monitor the situation.”

That’s the indication that the production acted immediately upon hearing a complaint. Yet two players had no idea what that meeting was about.

“Our ‘production talk’ came about 10 minutes before our Immunity Challenge. My experience in that talk was this: ‘Aaron, we want you to know if you don’t feel comfortable or safe, please know we are here for you. We want everyone to feel safe out here.’ Very out of the blue. I thought to myself, ‘Is this standard? Do they do this every season?’ I have no clue. Just a very vague blanket statement telling me if I ever felt unsafe, I should let production know. Roger that guys, now can I go focus on winning immunity? There was never any indication that something was going on or that someone had issues. It just seemed like a standard halftime meeting.”

“I did not connect our production meeting to Kellee and dan either. I was very much in game mode and focused on the upcoming challenge. I felt as though production was checking in with us individually. They told us to be mindful of others, and then I was back in the game, ready for the challenge.”

Survivor framed those conversations as so critically important that they might have stopped the game. After all, the third line in the title card says, “Based on the outcome of those discussions, the game continued.”

But if the players themselves didn’t know what the discussions were actually about, there was no “outcome.”

“We gathered all the players together and reminded them about personal boundaries and the need to respect them at all times. We covered everything from inappropriate jokes to respecting bathroom breaks, privacy to change clothes and touching in any way, including seemingly little things like brushing sand off someone’s face.

We were very clear in reminding them that they are our number one concern and we want them to be able to play the game without ever feeling compromised or unsafe in any way.

We then met with them individually, and a number of the players made it clear to us that they knew we were referring to Dan, even though we had never singled out any one player. Those same players acknowledged that they did not feel the need for any intervention from production.

We then met privately with Dan and told him that this was an official warning. He seemed surprised by the warning but replied that he understood.”

On the show, we did see one interaction that suggested Janet—and possibly Dan—knew the purpose of the meeting. In the post-Tribal Council conversation that Janet had with Dan, she said, “The ‘talk’ today was about you.” He says: “Yeah.”

“I’m completely in the dark that there was an issue between Dan and Kellee. Janet has just lost it based on being blindsided, and I’ve been reassured my alliance was playing the game. I never connected the ‘production talk’ with anything going on in the game. So I decide to speak up on what I saw going on in the game of Survivor coming from a purely game-related standpoint.”

Likewise, Missy told Mike Bloom that her strategizing around Dan’s behavior with Elizabeth—which she again apologizes for, saying “If I would have known the extent of the situation, I would not have engaged in the way that I did”—came from ignorance of the actual events:

“I had no idea that Kellee was spoken to by production in an unprecedented Survivor scene. That was news to me as I was watching it all play back. I had no idea that Dan had been issued a warning. The information I did have was that Kellee is uncomfortable with Dan, and Kellee wants me to go home. My thought process was to make Kellee want someone else to go home more than she wants me to go.

[…] This situation was highly emotional because we were in game mode. It came down to a bad game of telephone, and in no way did I fully understand the severity of Dan’s behavior. I thought to myself many times that if Dan’s behavior was indeed so horrible, why was he still in the game? I felt safe due to being filmed 24/7 and had no reason to think otherwise. Again, I did not know about Kellee’s or Dan’s personal talks with production.”

Did Jeff Probst and Kellee talk before or after Tribal Council?

Of the many poor decisions that the production made, I think that allowing Dan to speak at Kellee—while she sat, silent, in the jurors area at Tribal Council—was a particularly bad choice.

But it was a conscious choice, according to host and showrunner Jeff Probst, who said the production consulted with Kellee and then decided to not break its usual rules, so Kellee, as a juror, would have to remain silent.

As a Twitter user named Cassie pointed out, Probst’s version is a very different version than Kellee’s.

Here’s Jeff Probst, to Josh Wigler at THR, in a story published Nov. 13:

“…we gave great consideration to letting Kellee speak. I even met with Kellee after she was voted out to discuss the idea.”

And Kellee, to Dalton Ross at EW, in a story published Nov. 19:

“Jeff and I only spoke the day after Jamal got voted out so I was not aware of any discussion or option for me to speak beforehand.”

On top of that, Kellee added, she had no idea that it was going to even be discussed:

“I also wasn’t aware of what this tribal council was going to be about. Could I have said something? I suppose, but I would have had to gather my thoughts, broken a huge social norm and rule, and potentially alienate production, who had control over the narrative.”

In all of these stories, there is a very signifiant gap between the Survivor production’s version of events, and the actual players’ version. The on-screen narrative is a compelling one, especially considering how good Survivor is at crafting a story. But it is not the full story.