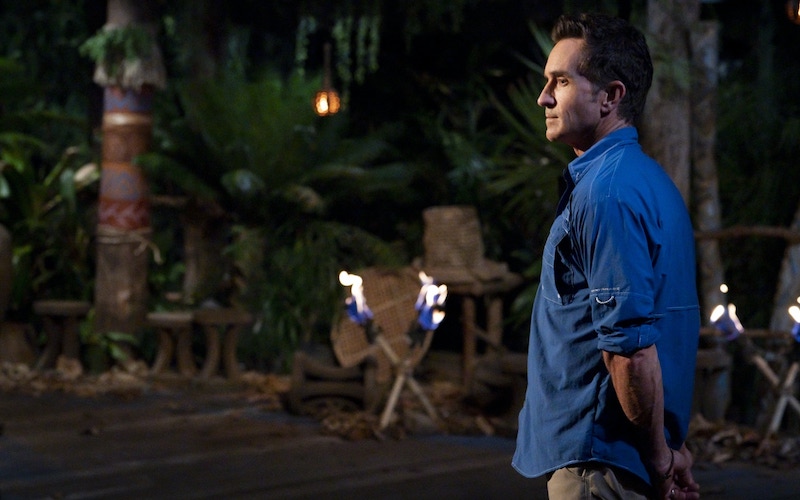 There’s been considerable reaction to last night’s two-hour #MeToo episode of Survivor: Island of the Idols, during which Dan was shown touching Kellee and Missy without their consent. Much of that has come on social media from fans, but cast members have also responded and apologized. And, of course, we heard from Survivor showrunner and host Jeff Probst. Here’s a roundup of some of that reaction.

First, CBS and MGM (which is run by Mark Burnett and owns Survivor), released a statement that basically just summarized the show’s position as broadcast on television. Doesn’t the need for a statement suggest the broadcast was insufficient in addressing people’s concerns?

“In the episode broadcast last night, several female castaways discussed the behavior of a male castaway that made them uncomfortable. During the filming of this episode, producers spoke off-camera to all the contestants still in the game, both as a group and individually, to hear any concerns and advise about appropriate boundaries. A formal warning was also given to the male castaway in question. On Survivor, producers provide the castaways a wide berth to play the game. At the same time, all castaways are monitored and supervised at all times. They have full access to producers and doctors, and the production will intervene in situations where warranted.”

The Hollywood Reporter tweeted a link to its story with that statement, and in the tweet referred to the events of the episode as “misconduct allegations,” and Josh Wigler’s story uses the word “claims” in its headline.

We had two scenes of clear visual and audio evidence: a man repeatedly touching a woman despite her objections and without her consent. Why is that not enough?

Kellee explained why those words can be damaging:

“This is why it was so difficult to stand up, because even when you do and there is video evidence, your words are still ‘claims’ and ‘alleged’ The wording of this article is NOT okay and perpetuates the doubt in those who decides to speak up”

“Hi everyone, I’m hurting and very sad watching this last episode too, but please try to be kind and understanding. No one deserves threats or shaming, and we can talk about this in a way that we are all better for it”

Survivor posted episodes of its “Ponderosa” web series for Kellee and Jamal; neither mentions what happened with Dan, either the unwanted touching or the strategic fallout.

Jeff Probst did his usual Q&A with EW’s Dalton Ross. In it, he makes it clear that he knows everything that happens at all times:

“Personally, I am constantly being updated on what is happening on the beaches. I receive updates on everything from minor injuries to rice rations to idol finds.”

Probst says that the production was willing to let Kellee handle her discomfort with Dan herself. (He doesn’t address why unwanted touching is different than a medical intervention, or the production intervening in physical violence.)

However, CBS insisted on the meeting and warning to Dan:

“After Kellee and Missy’s conversation about Dan, one of our co-EP’s interviewed Kellee. This is normal Survivor protocol. And, as you saw, in the interview Kellee got upset, so our producer stopped the interview to ask if Kellee wanted production to intervene. This is a very important moment because the producer is having to navigate a delicate balance of looking out for Kellee without taking any action that might negatively impact her game.

To her credit, Kellee stated that she felt the issue could be handled by the players involved and did not want us to take any action on her behalf. And as you saw in her earlier conversation with Missy, both women were very clear that they were not going to let one person “blow up their game.” But based on Kellee’s interview, the producer immediately shared the story with me and I immediately contacted CBS. The decision was made to meet with all players, both as a group and individually, to remind them of personal boundaries and hear of any concerns.

When we met privately with Dan, we told him that his actions were making some of the women uncomfortable and reminded him that personal boundaries must be respected at all times. We also informed him this was an official warning.”

During the second Tribal Council, Jeff Probst pushed for a discussion of what happened—but didn’t include Kellee, who’d joined Jack on the jury (and of course, jury members are typically silent, just observing until the final Tribal Council).

That meant one victim of unwanted touching was silent while everyone else talked about what happened. Did they consider letting her talk? Probst told THR’s Josh Wigler:

“We understood this was a very unique situation, and we gave great consideration to letting Kellee speak. I even met with Kellee after she was voted out to discuss the idea. It was not an easy decision, but in the end, the decision was made to stick with the rules, which are designed for the jury to not influence the game until the million-dollar vote happens on day 39. “

There’s more in both of those linked Jeff Probst interviews, such as his assertion that “There is no other television format that allows a topic as complex and important as this one to be explored in such a nuanced and truthful manner,” but I just can’t with that right now.

In a single tweet, Janet thanked people but also was protective of other cast members:

“I want to thank you for all of your support. It was a very difficult time, however I do love and care for my fellow survivors and I don’t want to see them negatively affected by anything that is said from the game. Thanks everyone”

Jamal tweeted a similar message, pointing out that the cast has been privately discussing and working through these events since the show filmed last spring:

“I cant reply to all who’ve sent me such encouraging messages. Please accept this as my gratitude for your kindness and support. This wasn’t fun for us to watch either. We’ve talked about it for months and are doing our own healing. Be kind and patient with all of us. No shaming.”

Tommy tweeted a reminder that the cast members didn’t see everything we did:

“Last nights episode was intense and important. Sitting and watching it back and having all the facts in front of me certainly changes my perspective on what was happening. I placed my vote on Kellee because she was a threat to win the game.”

“Had I of known all the facts that would have certainly changed my thought process. I in no way intended to silence Kellee and am not just supportive of her but also all women that choose to speak out about this type of harassment and misconduct.”

“I am sorry it didn’t come off that way on last night’s episode.”

The cast didn’t have all the facts, because they didn’t see the footage we did. But that’s also a reminder to listen to people did see what happened and experienced it—and believe them.

Apologies from Aaron, Elizabeth, and Missy

In a series of two emotional videos, which you can watch below, Aaron apologized for what happened at Tribal Council—and it’s not the kind of dismissive “if you were offended” apology, but one that seems very genuine and contrite.

Aaron says, in part, “I’m not looking to make any justifications in my behavior; it was completely unwarranted, it was out of line, it was out of place, I let emotions get the best of me, I made a mistake, and I’m completely, completely owning it up, taking full responsibility for my actions, the words that I said, and I am truly sorry.”

“I’m aware of what I said; I’m aware that it was wrong,” he added, saying that it was “not a moment of my life I’m proud of, and again I am truly, truly sorry from the bottom of my heart.”

He apologized both to Survivor players and to viewers: “I’m sorry to my castmates, I’m sorry to those people who’ve personally been affected by sexual assault and if I triggered anything, with what I said, I truly am sorry.”

This evening, Elizabeth and Missy both posted statements to Twitter as images.

Elizabeth’s directly addresses Kellee, Janet, Dan, and “men everywhere.” At the end, she writes, “I am deeply ashamed with my actions and I apologize—they do not reflect my character and who I am in my day to day life.”

Missy’s statement says, “I became so caught up in game play that I did not realize a very serious situation, nor did I handle it with the care that it deserved.”

She apologizes to Janet, Kellee, and “all women”:

Lauren apologized in a series of tweets:

I want to deeply apologize to all women and more specifically Kellee and Janet. While I had my own experiences and feelings towards Dan, I spoke with him and it stopped. While ignorance is not an excuse, after the merge I did not know the full extent of Kellee’s feelings […] regarding Dan. In no way did I use her feelings towards him to further my game. I am a firm believer of women supporting women and had I have known, I would have acted differently, been more supportive of Kellee & would have conducted myself in a way that better represents who […] I am. All women should be as brave as Kellee and stand up for themselves when put in similar situations. I am sorry I didn’t voice this opinion on last night’s episode.”