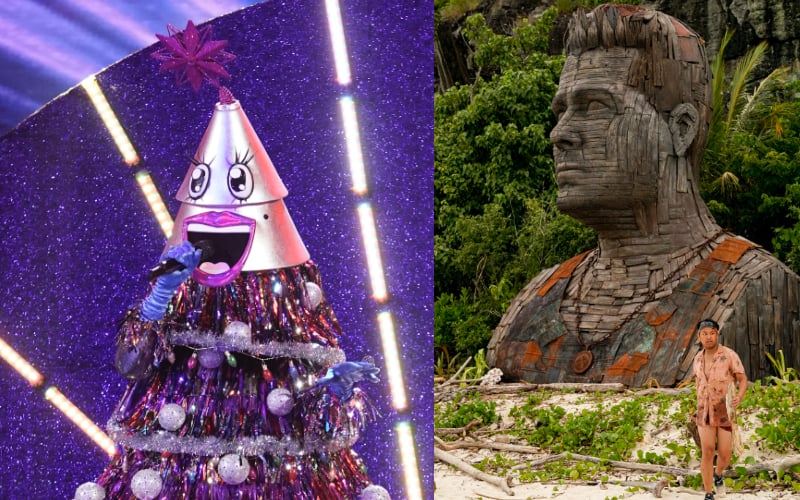 The Tree on The Masked Singer episode 2 (left) and a statue that's supposed to look like Boston Rob Mariano (right), with Survivor Island of the Idols cast member Vince Moua walking in the foreground. (Photos by Jack Zeman/FOX and Robert Voets/CBS Entertainment)

This fall, two of television’s biggest reality competitions faced off on Wednesdays at 8: The Masked Singer became the first serious competition to Survivor in some time—and before the Fox series took a break for The World Series, it was crushing Survivor: Island of the Idols regularly.

But there’s also some surprising good news: Survivor has better ratings than anything else on CBS during the first month of this new TV season.

Since then, the two have moved a little closer together, but with the same outcome in the face-off.

With The World Series as competition, Survivor didn’t really perk up the next week either: On Oct. 24, it had a 1.3 and 6.82 million viewers.

I asked Vulture’s west coast editor Joe Adalian—who’s a ratings guru, a fellow Television Critics Association member, and a friend—for his analysis of the ratings so far this fall.

He noticed that Survivor has risen to the top of all of CBS’ programs, scripted and unscripted during the first four weeks of the season.

It turns out that, when DVR viewing is included (what’s known as L+7), Survivor is the top-rated show on CBS among young viewers, ages 18 to 49. That’s the demographic that matters most to advertisers, and advertisers matter most because money matters most.

With data from the fifth week of the season, Survivor is now tied with NCIS with a 1.8. Not bad for a 19-year-old competition reality show.

Like with most of TV, though, ratings are in decline.

Compared to last fall, Survivor Island of the Idols has 18 percent fewer viewers 18 to 49, which is a similar drop to The Voice, which has lost 20 percent of its young viewers.

“Survivor is being pulled down by the same forces pulling down everything on TV more so than The Masked Singer,” he added, noting that he was impressed by “how well Masked is holding up. On the one hand, you could make the case that the show could build a bit in [season two], given more attention and buzz than the first time around. But in 2019, when erosion is the rule, for the show to be down barely 10% is impressive.”

As to Fox’s new competition series, which premiered earlier this year and immediately became the first big hit broadcast reality show in some time, Joe said, “There’s no doubt The Masked Singer is the ‘it’ reality show of the moment among broadcast series—it’s dominating both The Voice and Survivor in the younger demos, and it’s currently doing just a tad better than The Voice in overall audience.”

“But even though Survivor has clearly lost some steam opposite the No. 1 reality show at the moment (as well as NBC’s really stable and strong Chicago franchise), the show remains a relative powerhouse for CBS as it heads into its 20th year. Like so much on TV right now, it’s losing younger viewers at a faster clip than overall audience,” he added.

I asked if the head-to-head competition is hurting Survivor, or if that even matters in this era of DVRs and streaming.

“Would Survivor being doing better, especially in same-day demo ratings, if it weren’t facing Masked Singer? Probably, a bit,” he said. “But history suggests that Masked will start to fade, maybe even quickly, while warhorses such as Survivor (and the Bachelor franchise, and even The Voice) continue to do solid business.”

In other words, there’s no reason for CBS—or Survivor fans—to panic.

In its first month, Survivor grew its 18-49 audience by 46 percent when people who watched on DVRs within one week were included.

Joe pointed out that “it’s harder to monetize time-shifted viewers. But that’s a problem across the board, for all networks and most shows.”

Joe did have an idea for Survivor season 40, the all-star season.

“I’m curious what would happen if Survivor became a once-a-year event, but I’ve been waiting for CBS to make that move for 10 years, and they’ve managed to do just fine by keeping things the way they were,” he said.

“One idea: Delay the next season of Survivor to summer 2020, the better to take advantage of hype revolving around the 20th anniversary. CBS would still want to have another cycle ready for fall, but if the two seasons somehow played off each other, it could work.”

CBS already has Big Brother and now Love Island season 2 in the summer, so it’s doubtful they’d move it, but with the 20th anniversary next summer, how wild would it be to have Survivor back in the summer once again?

For now, though, it’s doing just fine on Wednesday nights, even against the most-popular non-sports broadcast show in the country.