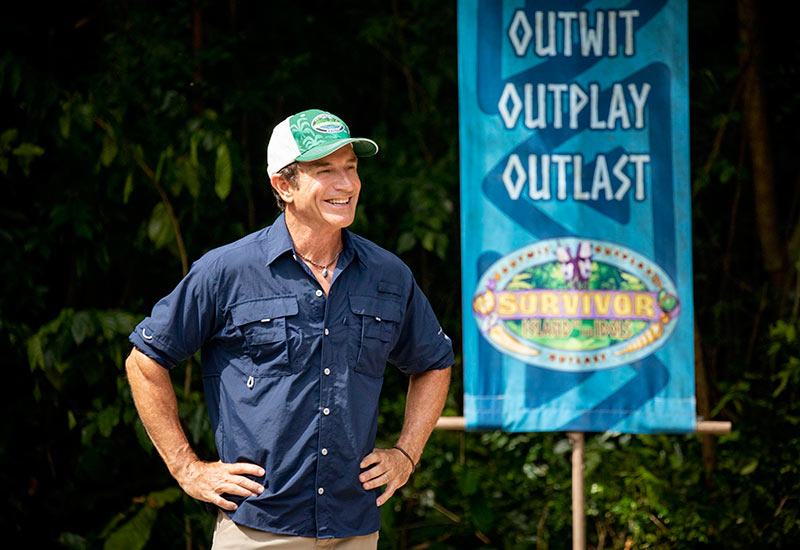 Jeff Probst on the premiere of Survivor Island of the Idols, standing next to a sign that reminds everyone what Survivor used to focus on. (Photo by Robert Voets/CBS Entertainment)

CBS announced the premiere date for Survivor 40, and the long-awaited all-winners season will arrive earlier in the year than usual.

Everything we know about Survivor season 40: Winners at War, including its cast and twists, plus the return of the Edge of Extinction and new fire tokens

Survivor: Winners at War (more on its subtitle below) will have a two-hour premiere, but while Jeff Probst surveyed Survivor fans about the possibility of longer episodes, the new season will have regular, one-hour episodes for the majority of the season.

The new season’s air date is the earliest start for a spring season of Survivor since 2013, when Survivor Caramoan: Fans vs. Favorites premiered.

That stays in line with the trend of moving premieres one week earlier for the past few seasons:

While there is a two-hour premiere, CBS didn’t explicitly say if that’s two back-to-back episodes, or one extended premiere.

However, TheFutonCritic’s listings of episodes shows that first two-hour block as episodes 4001 and 4002—two separate episodes.

Survivor Heroes vs. Villains did have one two-hour episode at its start, and it would have been nice for CBS and Survivor will do the same for this season.

However, if there isn’t enough time to introduce everyone on the premiere, never fear! That’s because everyone’s favorite garbage twist, the Edge of Extinction, is returning.

Survivor 40 will have regular, hour-long episodes, which is typical and not surprising.

However, last spring, Jeff Probst asked fans about extended episode lengths, and there was talk/hope of regular 90-minute episodes.

As I wrote at the time, that seemed unlikely, because CBS would have to pair Survivor with a 30-minute sitcom to make that work. Right now, the network just airs three one-hour episodes on Wednesday nights.

It’s easy to have a 90-minute fall premiere when that’s paired with a 90-minute Big Brother finale, but that’s a once-a-year thing.

CBS did not announce any details about the season, neither a subtitle nor anything about the casting.

While the return of all winners (here’s the full Survivor 40 cast, including Rob and Sandra) has been known for some time, the actual subtitle seems to have been uncovered by an Instagram user named Chris Scotts over the summer.

In July, he posted a series of photos from the Mana Island Resort and Spa, which is the headquarters for the Survivor production on Fiji.

The images seem to be of a place where used challenge props are stored and/or discarded, and one of his images shows a logo with two swords, dramatic waves, and the subtitle “Winners at War.”

That’s—a little dramatic and violent, unless there are going to be actual sword fights. But it will be an epic battle to see 20 previous winners competing against their equals.