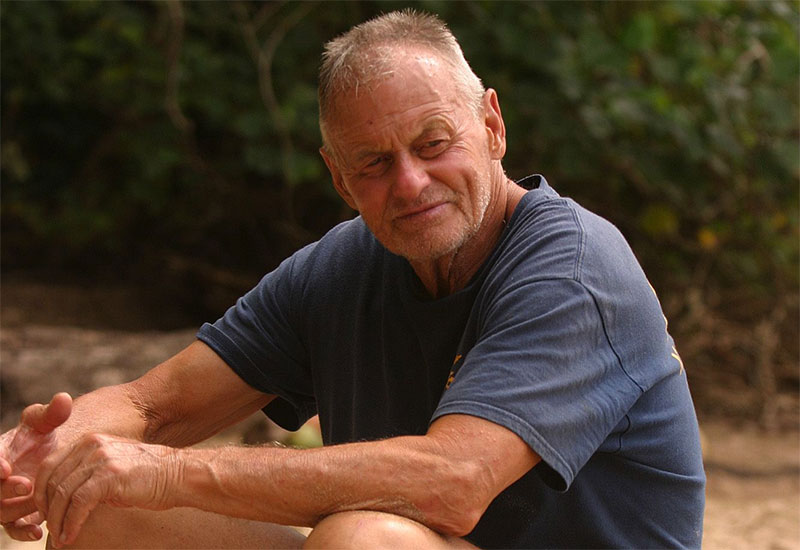 He was 91, and had Alzheimer’s disease, and was living in an assisted-living facility. Rudy’s wife, Marge, died 11 years ago at age 76; an episode of Survivor was dedicated to her.

Rudy was 72 when he competed on the first season of Survivor, becoming close friends and allies with eventual winner Richard Hatch, but “not in a homosexual way” as he memorably said in an on-camera interview.

“Master Chief Rudy Boesch passed away last night. He was surrounded by his family and passed away peacefully. He proudly served our nation from 1944-1990 and his impact on the men and women of Naval Special Warfare and the Special Operations Command is immeasurable… Rudy was beloved by all and will be deeply missed.”

Richard and Rudy’s friendship was remarkable television—especially in the year 2000. Richard wrote on Twitter today that they “helped open minds and undermine prejudices”:

As Brian Scully wrote in a long thread on Twitter in August, when reports started circulating that Rudy had died,

“Rudy would, at first glance, look like dismissive, hardheaded bigot. And yet he did something most never expected — he took people on their own terms. He was not only wily and self-aware, he was open. Becoming close friends with Richard Hatch in a short period of time happened and ‘queer’ wasn’t a pejorative to him. His only actual criticism was that he was fat. ‘He’s fat, but he’s good.'”

Rudy was a Navy SEAL—and a reality TV host

Earlier in his life, Rudy served in the Navy, including in Vietnam as a member of a SEAL team. After Survivor, Rudy went on to host the Mark Burnett-produced series Combat Missions in 2002.

His Survivor fame led him to become an action figure, and his celebrity didn’t go away in the decades following his time on television.

Five years ago, The Virginian-Pilot reported that, before their interview, Rudy “went into McDonald’s for a coffee. He had to pose for a photograph with some patrons before he could drink” it.

He also told the paper, “I just hate getting old – it’s slowing me down. I don’t jog anymore ‘cuz my knees hurt and stuff like that. I walk a lot and I am really slowing down walking.”

Rudy is the sixth cast member from the CBS version of Survivor to die, and the second to die this year, after Ashley Massaro. Jenn Lyon died in 2010, B.B. Anderson died in 2013, Caleb Bankston in 2014, and Dan Kay died in 2016.