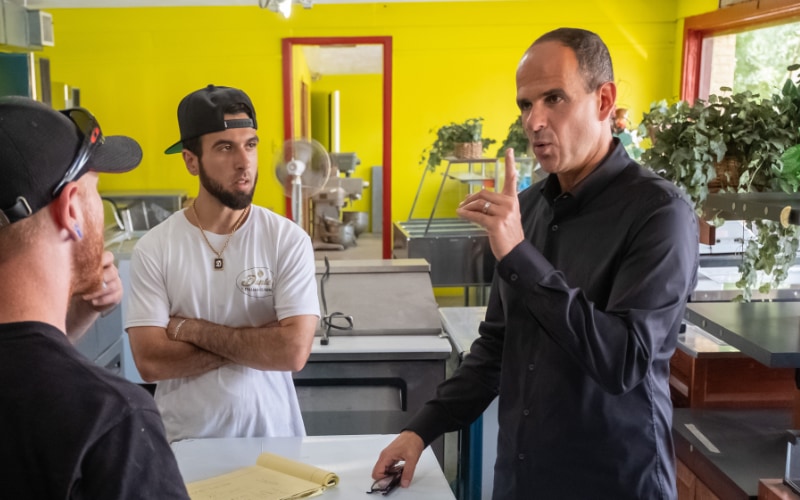 Marcus Lemonis (right) with Dante Alario (center), the owner of Dante's, on The Profit season 7's premiere. (Photo by CNBC)

But on the season 7 premiere, while there was a familiar story—an inexperienced business owner, a business with a great product but crumbling infrastructure and financials, a family member trying to control things—we saw something very different.

Actually, there was a lot that was different with the episode, starting with the show’s new look and feel (A new logo! and new lower-third graphics, complete with a large P!) and ending with the fact that Marcus Lemonis didn’t invest a dime but did stay to help. What?

There was no “100 percent in charge,” no negotiation, but Marcus didn’t walk away. He spent the entire episode working with Dante Alario, the owner of Dante’s Italian Cuisine in Rockaway, New Jersey.

“In addition to working on the food costs and on the processes, I also want to start cleaning up the place,” Marcus said at one point. Cue him working a pressure washer.

While there wasn’t even any money at first, Marcus eventually wrote a $30,000 check as a loan, but told Dante it “doesn’t matter how long it takes” to pay it back. Instead, he told us in an interview that he wanted to help Dante “focus on being responsible, understanding the value of money.”

What the hell was going on? Is this The Profit, where Marcus is 100 percent in charge? It is!

The difference is that Marcus was more drawn to the family’s situation and story than the business itself—and also he had no idea what was going on with the businesses’ financials, since neither did its owners. “When I receive applications from people for help, what matters to me more than anything is the purpose of their businesses,” he said.

And the purpose of this business had a devastating backstory: Dante’s, which used to be the Brick House Restaurant, was bought by Dante in 2016, using money the family received after his mom was killed on Sept. 11.

Margaret “Peggy” Alario, died at age 41 when she went to a meeting on the 105th floor of the World Trade Center tower 2. The New York Times’ obituary for her said that, “With only a high school diploma and some college courses, Mrs. Alario, 41, put in 12- hour days and Sundays, proudly building a career that had her working on national and international corporate policies.”

During the episode, her husband, Jimmy, referred to the money he received after her death as “blood money,” and explained he gave it all to his kids, because they lost their mother. (It’s unclear exactly what he was referring to, but perhaps money from the September 11th Victim Compensation Fund.)

Dante and his brother were kids when their mother died. Dante’s dad, Jimmy, said that, later, the money “was just sitting there and he couldn’t find a job. What am I supposed to say? I’d do anything for him. I’d jump in front of a train for him.” That’s when they bought the restaurant.

Marcus encouraged them to tell the story of the restaurant’s origin, and its connection to Peggy—basically, to draw customers. “I’m a big believer that in business, consumers will rally around a cause or a story or some personal connection they have. People like to do business with people,” he said in an interview.

Marcus and Jimmy went to a park with a view of lower Manhattan to talk, and suddenly a violent wind swept in with torrential rain. After it passed, there was an incredible rainbow in the sky, going right over the New York City skyline and the new One World Trade Center tower.

While the episode had that surreal moment and a lot of emotion, it was also more comedic than typical episodes of The Profit—at least, regular episodes. The Profit: An Inside Look adds a lot of levity.

Just as we saw happen on Survivor: David vs. Goliath last fall, the editing embraced comedy, including an extended montage with Dante trying to add up numbers from his dad’s handwritten ledger, which Marcus joked looked like what bookies, not businesses, keep.

For an additional layer of weirdness, Dante told NorthJersey.com, “It’s reality TV. There are a lot of psychological games.” But he also said, “What you see on the show is absolutely real. I watched the show in the past and expected it to be scripted, but that wasn’t my experience.”

All of this made for a rather unconventional and atypical episode of The Profit. Toward the end, Marcus explained why he made the decision to help without investing:

“There’s a lot of different ways to get a return on investment, and in most cases, it is money. But in this particular case, it is seeing that the memory of Peggy will live forever, and that Dante now realizes the importance of being a business owner, and having pride in it. And that Jimmy now realizes that his son can rise to the occasion.”

At another point during the episode, Marcus delivered what has become the theme of The Profit season 7: “This idea that business isn’t personal is total b.s. Business is personal.”

Placing people first and skipping profit made for a compelling episode of The Profit, and it’ll be interesting to see how much this extends into the rest of the episodes, or if it returns to its regular form next week.