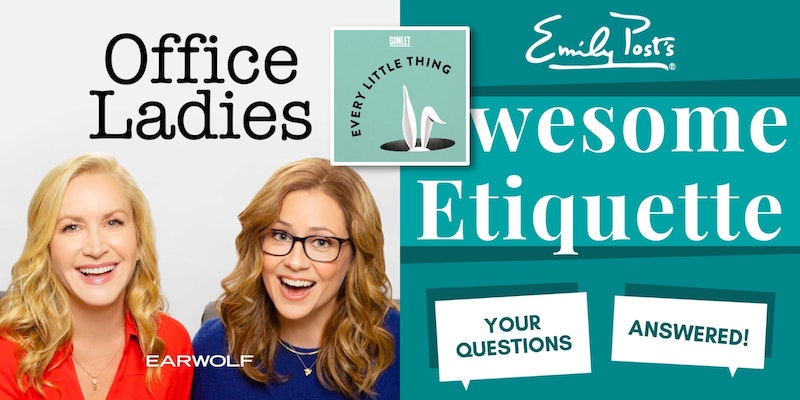 Cover art for the podcasts Office Ladies, Awesome Etiquette, and Every Little Thing.

Podcasts I’ve recommended previously in these pages have tended to be more like audio reality TV or documentary shows: narrative, episodic, and character-driven.

But for these pre-Thanksgiving recommendations, I’m suggesting three podcasts that are a little different: They’re nonfiction, yes, but have standalone episodes with more formatted structures.

But they’re also among the podcasts I look forward to listening to every week—and two have been part of my listening life for years now.

All three are available wherever you listen to podcasts, or on the web (links below). And if you’re new to podcasts, read this first.

The hosts of Awesome Etiquette, Daniel Post Senning and Lizzie Post, are cousins and the great-great grandchildren of Emily Post, and they’ve helped completely redefine for me what etiquette is. I used to imagine it having to do with formal table manners or archaic wedding traditions.

If you need to be convinced that their version of etiquette is not stodgy and stuffy, but modern, practical, and useful, Lizzie’s most-recent book is Higher Etiquette: A Guide to the World of Cannabis, from Dispensaries to Dinner Parties.

I’ve been listening to their audio advice since the very first episodes of Awesome Etiquette, after my husband introduced me to Lizzie and Dan’s segment on a now-concluded podcast called Dinner Party Download.

Episodes are structured around listener questions, and Dan and Lizzie give great advice—and fantastic sample scripts to use in tough situations.

Their advice is always guided by their central principles of consideration, respect, and honesty, and after years of listening, I’ve internalized those ideas and think about them often.

The unexpected part is how the show has documented Lizzie and Dan’s lives over the years, usually through their brief catch-up conversation at the start of each episode.

Whether they’re sharing significant moments in their lives or just talking about Vermont’s first snow, I love spending long drives dipping into their well of compassion, empathy, and practical ideas about how to behave. I couldn’t recommend Awesome Etiquette more.

I’ve mentioned Every Little Thing before, after it did an episode revealing the musical instrument behind a ubiquitous reality TV sound effect.

It’s the perfect combination of entertainment and education: I never feel like I’m in a lecture, but I’m absolutely learning and laughing.

Listeners call in with their burning questions—which can be about basically any topic—and host Flora Lichtman and her team answer them, usually by connecting with experts or people who are directly involved.

Flora’s wit and repartee with her guests, and some sharp editing that pulls everything together as a conversation instead of disjoined interviews, make it an easy, comforting listen.

And I don’t think I’ve never not learned something, from the fascinating origin of pants to where belongings confiscated by the TSA end up to whether or not you should sit on public toilet seats.

Listen to Every Little Thing

One of the highlights of The Good Place—one of television’s best shows, which is coming to an end early next year—is its companion podcast, on which Marc Evan Jackson talked through each episode with producers, cast, and crew, giving a lot of behind-the-scenes insight.

Two stars of The Office, Jenna Fischer and Angela Kinsey (who played receptionist Pam Beasley and accountant Angela Martin) have just started a similar journey: going through each episode of their NBC sitcom. Yet it’s a very different experience than The Good Place‘s podcast.

Part of that is structure, and part of that is just the nature of each show, starting with the fact that The Office has been off the air for more than seven years now.

I don’t think all of The Office’s humor holds up, but its documentary format and infusion of pathos into a silly sitcom sure have, both on The Office and all the shows that have borrowed from it.

Jenna and Angela are best friends in real life, and that makes for great conversation and light mocking, and they also learn a lot from each other, because although their desks were close together on set, they weren’t always part of the same scenes or storylines.

While they’ve had two guests so far, including Rainn Wilson, it’s mostly just the two of them talking through episodes. (As I write this, they’ve just produced six episodes, covering the first TV season.)

I’ve learned a lot about how the show was made, like the fact that the cast didn’t have Internet access on their computers for two full years, so the actors had to sit and pretend to work as if it was 1985.

Between Jenna’s “Fast Facts” and Angela’s observations about background details, the podcast has been finding its format and features as it unfolds, kind of like The Office found its way into being its own thing instead of a knock-off of the British series.

It’s been a fun dip into the recent past for me, since I watched The Office from start to finish, but have only seen an episode once or twice since it ended. I’m looking forward to listening to the Office Ladies talk through the rest of the series.