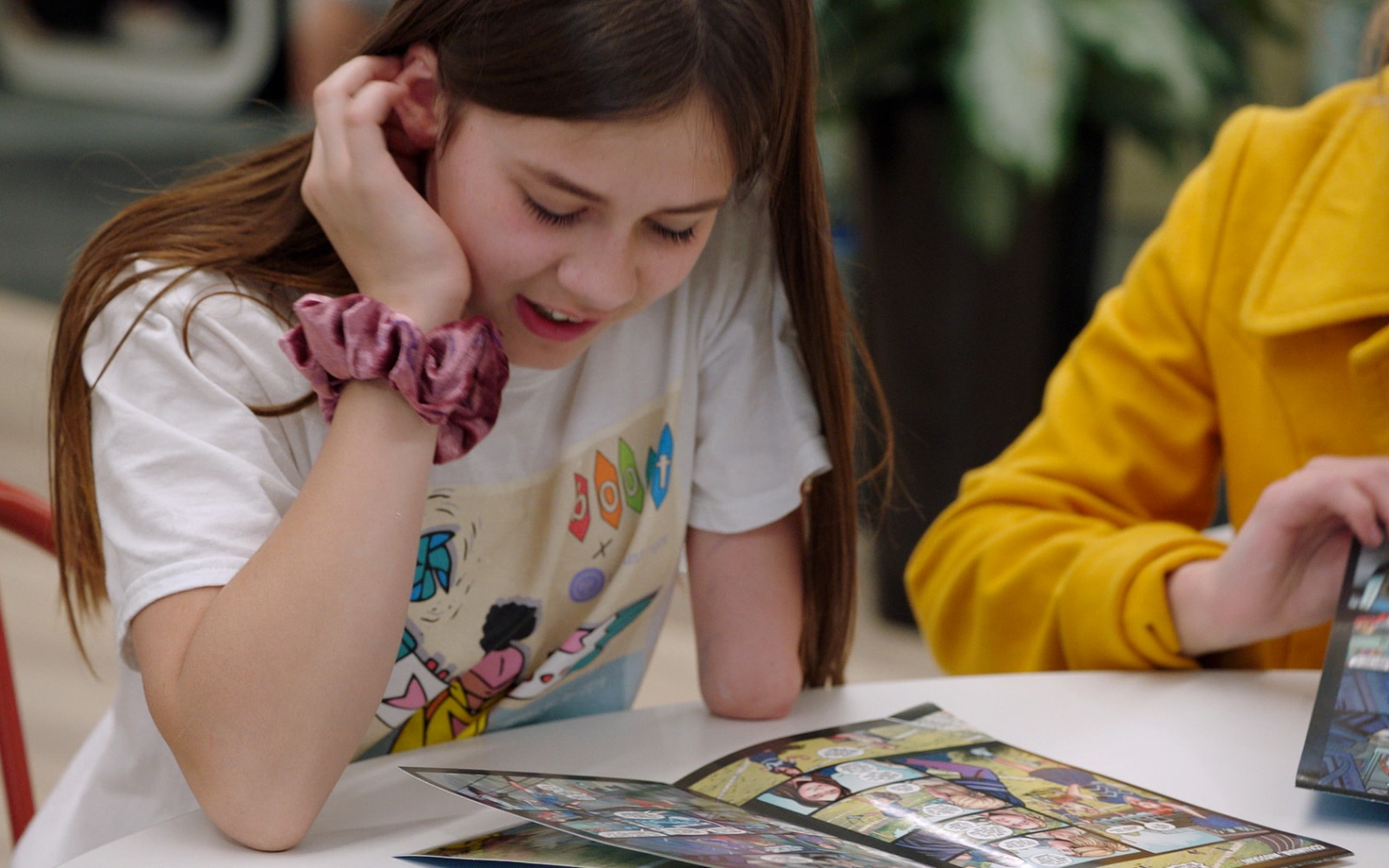 On Marvel's Hero Project, Jordan looks at a comic book created by Marvel that turned her into a character (Photo by Disney+)

The thing you should know about Marvel’s Hero Project, one of the first unscripted shows on Disney+, is that Marvel is involved. I can understand how someone could miss it, because Marvel’s name and characters are mentioned so much that Tahani Al-Jamil would lose to this show in a name-dropping contest.

The goal of Marvel’s Hero Project (Disney+, Fridays), is to highlight “the remarkable, positive change several young heroes are making in their own communities,” according to Disney+. “These young heroes have dedicated their lives to selfless acts of bravery and kindness, and now, Marvel celebrates them as the true Super Heroes they are.”

Despite Marvel’s presence, the show ultimately gives most of its 25-minute air time to the heroes its profiling: kids who’ve accomplished amazing things. To give them and their work attention is hard to resist, even with Marvel giving attention to itself.

The show opens with a meeting of Marvel executives who talk about the kid who will be profiled—and, of course, name-drop Marvel properties: “When I think of characters in the Marvel Universe who shine a light, I immediately think of Johnny Storm…” “…Elijah has that power, similar to Mantis…”

This is all pointless, because they’re not turning Elijah or the show’s other subjects into Mantis or Johnny Storm or Hulk, but instead just making the kid into a character, and the star of their own comic book. (The comics are online.)

So talking about other Marvel properties makes this more of an infomercial than it needs to be.

The second and better scene with Marvel executives comes later, when they explain what abilities they’ve worked into the illustrated version of the kid. Marvel’s Nick Lowe identifies 13-year-old Jordan’s “inventiveness, her creativity” as her “superpower.”

Of course, while they talk, there’s Marvel stuff in the background, and even then the Marvel people dwell on Marvel, such as giving their Marvel teams a lot of credit for the marvelous work they’ve done, which is a choice.

In episode two, Marvel editor Devin Lewis summarizes the surprises that the show has planned for Elijah, including a reunion planned with his brother, and then says, “All of Elijah’s dreams are coming true today—and he’s going to get to be a part of the Marvel universe”

Wait, Marvel is involved with this show?

To highlight what kids do well in such specific ways, and then illustrate them: that’s awesome.

And that really is the strength of the show, because once it moves away from Marvel-dropping, these are succinct, sincere profiles of extraordinary kids doing extraordinary work.

It spends time on the work they do, showing them in action. For example, Elijah Lee, 11: We see him talking to a city council, being interviewed on a radio show, and hanging up flyers for a march he’s planning to call attention to child abuse, which he learned about when he saw a classmate’s injury.

Hearing him speak—at his march, and later on the steps of the Lincoln Memorial, is gutting, thanks to his his abilities as a speaker and his authentic passion. “We must take care of our children,” he proclaims into a mic at the march.

There are moments like that, small and large, that are quite touching, especially as the kids constantly deflect attention away from themselves, toward others.

“I may have one hand, but heck I can do the same thing as anyone else, just a little different,” 13-year-old Jordan Reeves says. “It’s good to be different. I feel like people who are different is what makes the world unique, and I think it’s so cool.”

And then she talks about her work: “People who are disabled: they’re being ignored in the design community,” she says.

A total of 20 kids will be profiled in season one. Of the first three kids profiled, all have received media attention before. Jordan’s creativity and activism has led her to The Rachael Ray Show and a TEDx talk, and she published a memoir with her mom earlier this year.

But when her mom says, “I’m so happy that her work has more opportunities for people to know about it and share it,” it’s hard to argue with Marvel’s Hero Project giving more attention.

“Elijah is already a hero. Now, we bring his story to the world,” the narrator says at the top of the second episode. That’s a noble goal. Using it as an ad for Marvel is less heroic. As the kids prove in each episode, you don’t need to repeatedly call attention to yourself to do significant, meaningful work.