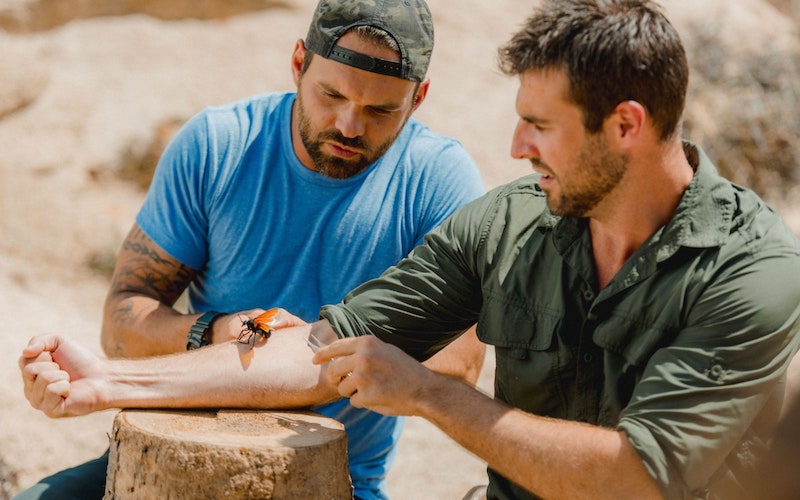 On Kings of Pain, Rob “Caveman” Alleva puts a tarantula hawk, a massive wasp, on Adam Thorn so it can sting him. (Photo by Damien Maloney/History)

Watching men get hurt while cameras film has been the subject of plenty of unscripted shows, starting with the early 2000 series Jackass and Wildboyz. But could it actually be science—life-saving science?

That’s the claim of Kings of Pain, History Channel’s new reality show on which a biologist and an animal wrangler are bitten and stung, including by venemous and poisonous insects and snakes, all in the name of science.

Kings of Pain, the History Channel says, “follows wildlife biologist Adam Thorn and professional animal handler Rob ‘Caveman’ Alleva as they get bit and stung by some of the most dangerous animals and vicious stinging insects in the world—from a reticulated python to a rove beetle—to create a complete and comprehensive pain index that will ultimately help save lives. … Now Thorn and Alleva are taking Schmidt’s pain index even further adding venomous bites and more deadly creatures and ranking them on a 30-point scale with new categories including intensity, duration and damage. Their goal is to create history’s ultimate and fully comprehensive guide to measuring pain. In addition, they will be consulting with Schmidt as they build this new pain index that is completely new to science to be used as an educational tool showcasing which creatures humans should avoid and what to do in the event they do get bitten or stung.”

That refers to the work of entomologist Dr. Justin O. Schmidt, whose 2016 book The Sting of the Wild documents his “numerical ranking of the agony of each of the eighty-three stings he’s sampled so far.” (View an illustration of that pain index.)

Kings of Pain (History Channel, Tuesdays at 10) turns that science into reality television, and has given us scenes like this one, in which a reticulated python bites Adam:

One YouTube commenter watched that and wrote, “Next time jump in front of a speeding bus.” As in: of course it hurts!

To learn more about the show and how it was produced, I interviewed Mary Donahue, History Channel’s senior vice president of development and programming, who also oversees popular reality shows including The Curse of Oak Island and Forged in Fire.

So does this experimentation have actual value, or is it just an excuse for a reality show? Is the series more about information or entertainment?

“Both,” Donahue said. “Because History is a factual brand and information is core to who we are, what we looked at is an opportunity not just to update the pain index, but to provide interesting information that people might not know. I personally learned a ton.”

The network’s name points directly at one kind of information: historical details, which Donahue identified as “core history information.”

“I’ve been fortunate enough to have been on this brand for 11 years, and one of the things that I find a great privilege about working on it [connects to] what used to be our brand ID: History is made every day. It’s not just about the past; it’s about the present.”

“And for me, History is fundamentally about information, and we consider that our mission: to provide information in each and every one of our shows. Sometimes it connects to the far past, in which case we try to make it relevant for today’s viewers, and sometimes it’s completely situated in the preset. But always, at its core, it’s factual information that we’ve very carefully researched and double-tested, and for that reason I feel that this series fits well within our brand,” she said.

Donahue gave an example of how Kings of Pain touches on both the historical record and current information.

“One of the things that was surprising to me was the number of invasive species that are actually dangerous to the public, that are now throughout the U.S. So we looked at this as an opportunity to provide core history information. For example, in the tarantula episode, we referenced Teddy Roosevelt,” she said.

“But we also believe that science is fundamental information for our brand, and telling people about species they might not have thought were in the U.S., teaching them how to identify them, and letting them know the dangers and what to do should they be bitten or stung, was an opportunity that we saw as fascinating.”

For Kings of Pain, a venom specialist came on board during pre-production. “We worked with Dr. Ben Abo, who’s a venom specialist. He was very key to helping us plan the series, and connect it to the pain index. We heavily researched the invasive species that we wanted to portray in the series, and we worked a lot with Dr. Schmidt on what he felt would be an interesting updating to the index.”

The show was initially pitched to History by Ben Silverman and Howard T. Owens’ Propagate Content, which led with the idea of Dr. Schmidt’s work.

Donahue said that the show’s eventual stars, Thorn and Alleva, “were such fans of [Schmidt] and his work—would he be willing to actually engage with History? And he was 100 percent enthusiastic in embracing the opportunity to update the pain index that he’d begun in 1983.”

But why do that in the wild instead of a lab? The answer has to do with some of the participants—and not the people.

“Safety for us was a paramount, paramount consideration,” History Mary Donahue told me. “We vetted this series left, right, up, down, and center, at every step throughout it. Key to us was ensuring two things: One, that our two guys, Adam and Rob, were safe, hence why we made sure there was a medic and venom specialist with us at all times.”

But there was another consideration: the animals. “We also really cared about the safety and health of the critters that we were going to profile,” she said.

“When we got there, we wanted it to be as controlled as possible for the actual stings and bites. That way we could ensure that the talent was safe, even though they’re expert handlers, that we would be able to re-release the critter back into their habitat immediately,” she said.

Adam and Rob were only bitten or stung once per day.

“We were super, super careful—we researched the toxins—so we were very careful that we never execute more than one bite or sting a day, and that we monitor what happens to the guys as part of updating the pain index,” Donahue said.

So what about the science? An eight-episode TV show has been filmed and is now airing. What’s next?

Donahue said that Aba “is planning to write a scholarly article on it,” adding that “he is truly the premiere venom expert in the country, so his own research and knowledge base will be expanded as a result of his excellent work on this series.”

“And we obviously hope to work with Dr. Schmidt to add different creatures to the work that he has already done, and to also, in some cases, to be re-stung by critters that he faced to see what is the experience of other people?” she added.

“I also like the fact that we have a slightly more expanding index that we’re ranking them on a more expansive and comprehensive scale than Dr. Schmidt began his work with, and he also agreed that was a truly exciting advance.”

Despite that potential for the events of the series to contribute to an existing body of knowledge, there are still those (understandable) responses, like the YouTube commenter quoted above.