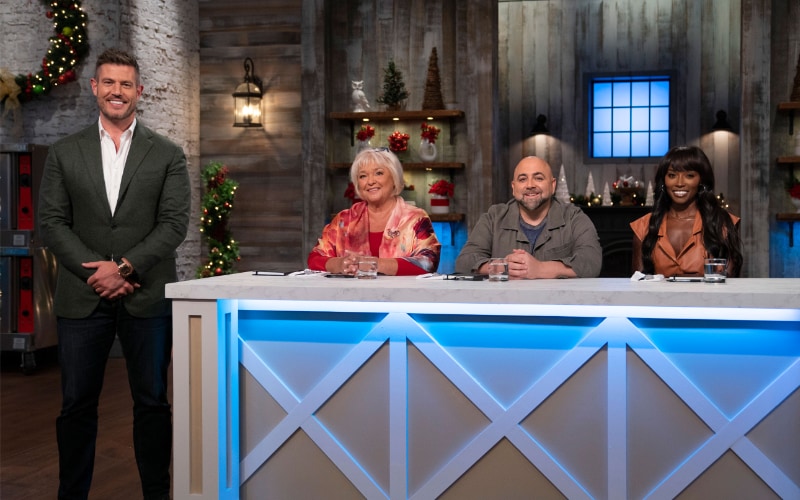 Halloween and October are over, it’s apparently Christmas time already—judging by the commercials I’ve been seeing on TV, not judging by actual sanity. But reality TV is giving us three new holiday baking competitions this week alone, and there are more to come.

There are non-holiday reality shows premiering this week, too, and they’re below, in this weekly preview—which you can now get by e-mail on Sunday night (this will eventually be a premium feature, but it’s free for everyone now), in addition to my hand-crafted Friday newsletter. Just add your e-mail address:

Antiques Roadshow celebrates its 500th episode with a special tonight, “Extraordinary Finds” (PBS, Monday, Nov. 4, at 8), which is a kind of reunion show for memorable antiques. Both the objects’ owners and appraisers will return to discuss what happened after the show.

PBS says those object include the “grungy Seymour card table” that was appraised at six figures; “a folk art swan sleigh made around 1880 that instantly stunned appraiser Allan Katz…because he already owned an almost identical version”; and the 1850s-era Navajo Ute First Phase blanket.

Also, don’t miss my interview with Antiques Roadshow’s producer about how it’s cast and filmed.

Marcus Lemonis and The Profit are back with new episodes (CNBC, Tuesdays at 10). Here are the businesses featured on The Profit season 7.

And The Profit producer Amber Mazzola has a different kind of business makeover show premiering the next night: Back in the Game (CNBC, Wednesdays at 10) follows Alex Rodriguez as he tries to help celebrities who’ve personally struggled with finances.

Also back this week with new seasons:

In other news, TLC has a new show that I don’t understand: Welcome to Plathville (TLC, Tuesdays at 10) follows nine kids and their parents, who’ve raised them without technology or access to things like Coca-Cola. Yet now they have a reality show crew hanging around? Just watch this preview, which has a drone flying around filming them!

Okay, let’s get to Christmas and holiday reality TV.

After the premiere, Holiday Baking Championship brings back three runners-up to compete in a “Sweet Redemption” special (Food Network, Monday, Nov. 4, at 10).

And that’s not all! There’s also the Christmas Cookie Challenge (Food Network, Nov. 4 at 11, then Mondays at 10), which has five new contestants and two challenges in every episode.

We’re also getting season two of The Great British Baking Show: Holidays (Netflix, Friday), where past contestants return to—yes, I think this is right—bake holiday things.

There’s a Blue Planet spin-off, sort of, that premieres this weekend. Blue Planet Now (BBC America, Saturdays at 9) follows three hosts “as they travel to different locales around the globe where marine life is coping with increasing changes,” according to BBC America.

Because Travel Channel can’t give up on ghosts and mysteries even though Halloween is over, it’s premiering Famously Afraid (Travel Channel, Tuesdays at 10), on which celebrities talk about scary things that happened to them, and Lost Secrets (Travel Channel, Sundays at 11), which follows a historian who tries to “unlock mysteries.”

If that wasn’t enough unlocking, Unexplained and Unexplored (Science, Sundays at 10) follows two explorers who combine old and new technology to look at mysterious things.

The Devil Next Door (Netflix, Monday) is not the A&E reality show The Devil Next Door that A&E pulled and never aired, blaming producers, as A&E loves to do. Netflix’s version is a documentary about the Cleveland man, John Demjanjuk, who was tried for being a Nazi concentration camp guard.

Decade of Fire (PBS, Monday, Nov. 4, at 10) is an Independent Lens documentary about fires in the Bronx, when “close to a quarter-million people were displaced” and there was “abandonment of landlords and dwindling support from government officials [that] led to the devastation,” according to PBS.

The Apollo (HBO, Wednesday, Nov. 6, at 9) follows the history and current occupants of the theater, which HBO says “began as a refuge for marginalized artists has emerged as a hallowed hall of black excellence and empowerment.”

Finally, Sea of Shadows (National Geographic, Saturday, Nov. 9, at 9) is a new thriller documentary about people trying to stop what happened when “Mexican drug cartels and Chinese traffickers join forces to poach the rare totoaba fish in the Sea of Cortez, their deadly methods threaten to destroy virtually all marine life in the region, including the most elusive and endangered whale species on Earth, the vaquita porpoise,” according to NatGeo.