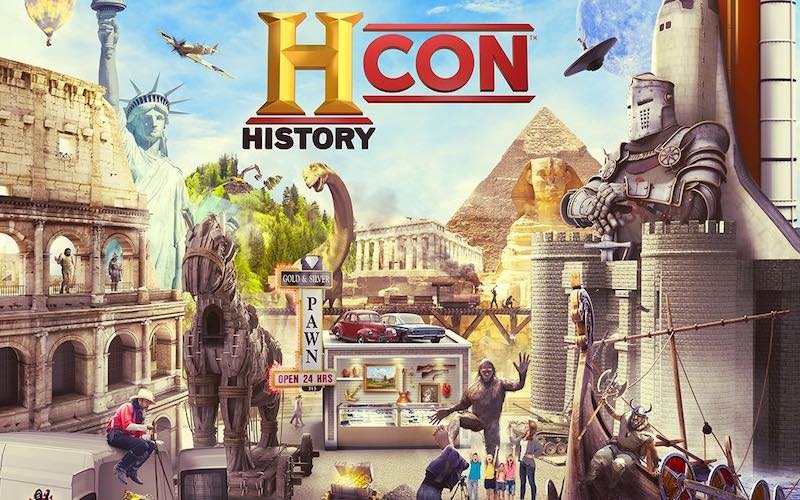 An illustration released by History Channel to promote its first-ever convention, HistoryCon.

Following the success of BravoCon last weekend, the History Channel has announced its own convention—titled HistoryCon, of course—that will take place next spring, as part of the channel’s 25th anniversary.

While Bravo didn’t announce talent until just before the vent, History has already announced some talent, from Ancient Aliens stars to actual historians, including keynoter Doris Kearns Goodwin. And while MTV announced its own RealityCon last April, there are precisely zero details about it, while History already has tickets for sale.

HistoryCon will take place April 3, 4, and 5, 2020, at the Pasadena Convention Center in Pasadena, Calif., the same venue that hosts America’s Got Talent auditions.

Tickets are now on sale, and range from a $79 one-day pass to $350 “utlimate” passes themed to three of the network’s reality shows: Forged in Fire, Pawn Stars, and Ancient Aliens.

There is also even a preliminary schedule, which is far more information than Bravo had released just two weeks before its actual convention.

I’ve been impressed by how History Channel has kept to its actual title, even with its reality TV, which often includes historical informational—even in a seemingly ridiculous show like Kings of Pain.

HistoryCon, too, won’t just be focused on its reality TV. In fact, of the the talent announced so far, there are more experts and historians than reality stars (by one, but still!).

Here are the reality stars scheduled to appear:

The “deep bench of historians and experts” scheduled to appear are, according to the network:

Presidential historian Doris Kearns Goodwin, who’s attached as an executive producer to History’s forthcoming hybrid documentary/scripted series Washington, said in the press release, “Making history accessible to new audiences in new ways is essential, and I’m very pleased to be part of HistoryCon and the network’s mission to make history relevant to people from all ages and backgrounds. History is full of fascinating stories—the more we inspire people to examine and explore them, the better equipped we all are to use the lessons of the past to inform our collective future.”