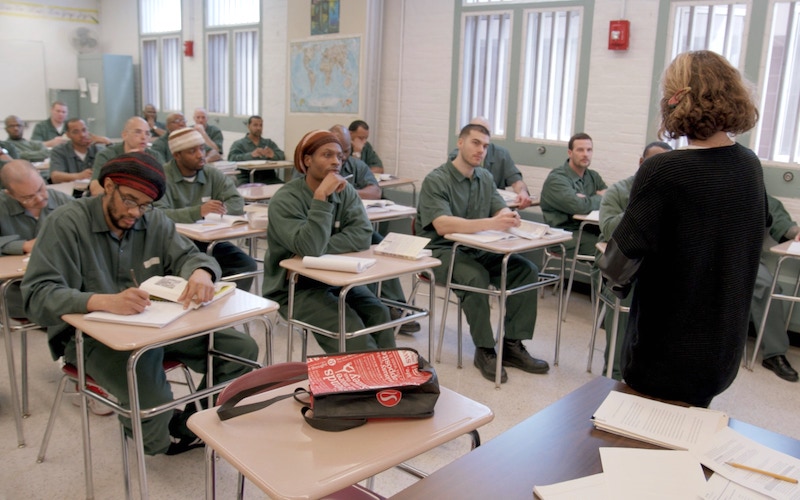 “There are some popular shows in prisons that prisoners watch—they are documentaries about other prisons, but for us, it’s more like comedy,” Sebastian Yoon, a graduate of the Bard Prison Initiative, told TV critics at the Television Critics Association summer press tour. He was talking about his time in prison.

“We’ll watch these shows and we’ll laugh, because these documentaries, basically all they do is demonize prisoners. You see them acting violent and irrationally. Society has this imaginary [idea] of how prisoners act on a daily basis,” he added. But College Behind Bars, a series that starts tonight (PBS, Monday and Tuesday at 9), offers “a different side that’s more realistic,” he said.

The difference between College Behind Bars and other documentary or reality TV shows set in actual prisons is apparent immediately, from the gracefulness of the visual images and immersive storytelling, to the way incarcerated people are introduced.

While it’s “presented by Ken Burns,” an executive producer, it doesn’t have the feel of a typical Ken Burns documentary. After all, it’s not his work: It’s produced and directed by Lynn Novick, the Emmy-winning producer and director who’s collaborated with Burns on Baseball, Jazz, The Vietnam War, and other projects.

Instead of using historical footage and talking-head interviews, it’s cinéma-vérité, with cameras and the editing capturing life inside the prisons. We see students trying to earn a college degree, writing papers, discussing ideas in seminars.

There are also extracurricular activities: a debate team preps before it faces off against a team from Harvard.

The students are incarcerated people who are part of BPI, or the Bard Prison Initiative, which was founded at Bard College by undergraduate students 20 years ago and says it currently has 300 students and has graduated 550 people with college degrees.

The college funds the program, and funding for higher education is one of the many issues College Behind Bars explores. That happens through the experiences of the people we’re watching, such as the prison guards who can’t afford college themselves, and thus resent the students in the program.

The first person we meet in the series has been incarcerated for 13 years, and he tells us, “Prison is here to punish us. It’s here to warehouse us. But it’s not about rehabilitating. It’s not about creating productive beings. It just isn’t.”

Of course, that’s the exact opposite of what we often imagine prison to be, and the ideas reinforced by reality TV shows that suggest this punishment will have transformed people when they leave.

Sebastian Yoon, who’s featured in the show, told TV critics, “I’ve been to five different maximum security prisons, and I can assure you that they were nothing like the documentaries that you see. It does not happen every day. But what we do as BPI students—that was every day, every hour. I had to live two lives: one as a prisoner, one as a student. But in identifying myself, I never saw myself as a prisoner. I was just in prison, but I was a scholar trying to obtain an education so that I can return to society and do my civic duties and understand what these duties are and how can I use these duties to empower the world, especially for people who are marginalized and our voiceless. Because in prison, that’s what we are. We are marginalized voices and we’re dehumanized.”

How College Behind Bars was filmed

College Behind Bars was filmed over four years at two different prisons by Novick and producer Sarah Botstein, allowing the show to follow what happens to students in BPI: some transform, others drop out.

Novick told me that they began the process by spending months without cameras: “just observing, just trying to understand what was going on so we could sort of figure out where we wanted to film and who,” she said.

During that time, she said, “people emerged” that they wanted to profile—but then came the question, “Do they want to talk to us?” It was up to individuals to decide whether or not they wanted to be filmed and be part of the show.

As the production went on, “I think the students felt more comfortable to open their world to us,” she said, and “just make themselves available.”

Filming over four years took place with a small crew—”between three and six people,” Botstein told me. It wasn’t a 24/7 production, but “a couple days at a time,” and “some semesters we shot more than other semesters,” she said.

Novick said the production was “very focused” on “what we have to get accomplished today. Otherwise, you end up with even more material. There are things that we wished we could have filmed, but there’s also lots of things we found that we didn’t use.”

The show is visually striking, and Botstein said how it would look was “one of the challenges we really wrestled with when we started.” That’s because they’d be filming “over four years in this pretty dreary environment. How are we going to make it exciting visually for the audience? We don’t have what we usually rely on: we can’t just cut away to footage or some beautiful documentary photographs and some newspaper evidence or whatever.”

She praised the work of their “extraordinary cinematographers, Nadia Hallgren and Buddy Squires, and they have different visual sensibilities in different eyes, but they use [the environment] as a strength.”

“We’re really conscious also that this is a world that most people don’t ever see,” Novick added. “The reality TV that Sebastian talked about is so harsh. The quality of the video and the way it’s shot is inherently—yeah, something, I don’t even know a word for it.”

“We really sort of tried to do the opposite and just show this the way we would show any other things,” she said.

Novick and Botstein have been working with each other for 20 years, and shared responsibilities. While they’d be in the same room during interviews with the show’s subjects, they also split other work. Botstein handled a lot of the advance logistics, while Novick handled editing.

The latter happened because after filming concluded, Botstein recused herself, as she explained to me.

“Over the course of making the film, I ended up falling in love with Max Kenner, who is the executive director of the program, and marrying him, and [now] we have a son. So I recused myself from the final editing part of the process creatively—to just avoid any possible conflicts—and came back in when we locked picture. So that’s the love story part of the making the movie.”

She said that, “over the course of making the film, [we’d] gotten to know each other—obviously very well. I think he’s extraordinary, so I feel really lucky for that. And the students in the film all kind of watch that happen. They love the love story part of it.”

College Behind Bars is Novick’s first project as director and producer, though it also begins by announcing it’s “presented by Ken Burns,” and he’s an executive producer.

I asked Novick about that, and she said, “Ken is an enormous brand and it would be disadvantages to the project not to make sure that people who admire his work—and our work—know he’s associated with it.”

She said that, during the process, Burns was “very supportive and encouraging” but said she went “forth and made my own film. And as executive producer, he was very helpful, but never overbearing or overly involved. He gave us great editorial notes the way an executive producer would.”

During production, the concept behind the series changed. “We started out thinking that we were going to make a feature length film. By the time we finished shooting over the four years, we had four hundred hours of material,” Botstein said.

Novick explained that they began their process by organizing the material they have. “We select the moments we think are the most interesting and compelling and we put them in basically a timeline and it was eight hours long,” she said. “So the idea of getting that eight hours to an hour and a half just seemed actually impossible.”

College Behind Bars is four episodes, though Novick said “we probably could have made a six or eight hour series. It would be very different.”

Novick said that the final product “is not really an argument for anything, but the fact that there’s so little access to higher education in prison seems like very bad public policy just on its face, given how effective it is in the things that we think we want our prison system to do.”

“If anything,” she added, College Behind Bars is “an argument for the fact that education inherently is a right and that everybody should have access to it wherever you are.”