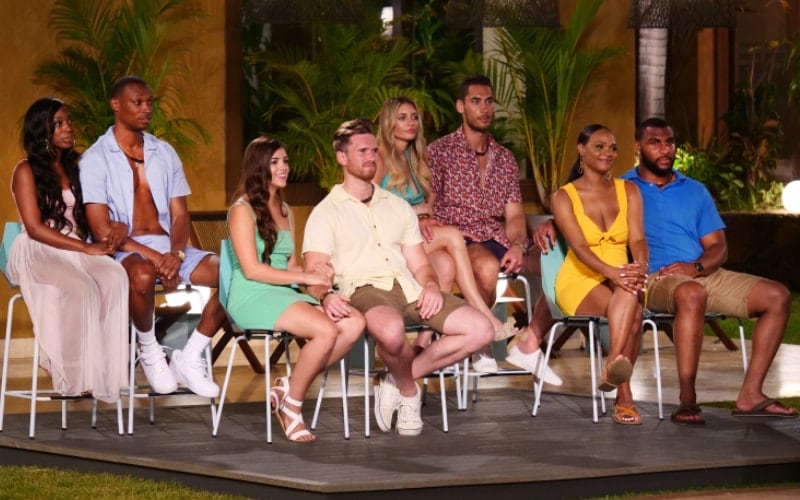 “Why are you here?” Mark L. Walberg asked Casey and Ashley during the premiere of Temptation Island season five. “Why the fuck are we doing this?” Kate asked her boyfriend David.

Those question were the focus of last night’s premiere, as they were on the first episode of USA Network’s revival of the franchise. What’s remarkable is how surprised the couples seem to be about what they’ve decided to do, and then how they deal with that surprise.

If you’d shown footage of the couples say goodbye to each other to someone who didn’t know what this show was, they might have guessed that one member of each couple was going into surgery, or prison, or space. Moments before that, though, many of them were in accusatory mode, blaming and threatening and worrying.

What led to tears and anger is their decision to spend time living instead with a bunch of attractive, love-seeking single people. On Maui. For a month.

The enduring mystery of Temptation Island is why exactly anyone would do this. This season, there are two Ashleys in the cast, but everyone has all of the same insecurities as last season.

USA is calling this season two, which only works if we’re going to pretend the three previous seasons didn’t exist, but maybe that makes sense, because this version of the show is considerably different: it’s not the trashy Fox version, but a surprisingly thoughtful look at what inhibits connection in romantic relationships.

One of the Ashleys, the one whose boyfriend is Rick, said, “I need my ring,” and I said to the TV, No, you need therapy—you all do! Our culture’s fucked-up examples of—and ideas and messages about—relationships have done a lot of damage to so many people.

Later she said, “We need to take the steps forward in our relationship. Move in. I want a ring, because I really do have goals for us.” The same Ashley also said, “If I see your lips touching another girl’s lips, I’m going to act up.”

Those are demands and threats, not a relationship. Yet it’s a familiar pattern, both on Temptation Island and in relationships that don’t decide to test themselves by spending a month dating other people. Just watch an episode of the exceptional new reality series Couples Therapy for examples of this.

People are focused on the idea of what they want instead of what they actually have—whether what they have is good for them or toxic—and Temptation Island has a way of exposing that, although it doesn’t really explore it.

The fractures appear when the single people appear, and they appeared, backlit and walking slowly, as if they were coming off the spaceship on Close Encounters of the Third Kind.

Temptation Island’s tempters appear, and they have jokes

Once again, the producers had Temptation Island’s 24 single people introduce themselves with badly scripted, jokey introduction. This is so cheesy, and such a tonal disconnect from the rest of the show, that I started to wonder if it’s intentional to lighten the mood and give everyone something else to focus on.

Some of those are ill-conceived: “Watch out guys, because I got your ladies in my sights,” said former Army sniper Ben.

And some are just insane: “What’s up? My name is Deac. I’m 25, from Naples, Florida, and I like to consider myself a comedian. So here’s a joke: What got between you and your girl? Just this Deac,” and then he stuck out his tongue and made a noise like a seventh grader who’s trying to come up with a witty retort but can’t.

The funniest part of that was the retort from one of the guys about two-inch Deac.

As all of the single people introduced themselves, Gavin said, “It’s like a dream that started off good, and it’s slowly turning into a nightmare.”

What was most fascinating to me was how many of the eight cast members became instantly hostile, directing their problems in their relationship at strangers instead of at themselves.

For a reality show all about drama in relationships, Temptation Island really does raise the temperature of the water slowly. Host Mark L. Walberg separated the couples for one the first night, but promised them: “This isn’t permanent yet,” and offered gentle advice: “You’re going to have to get used to not relying on your partner for comfort.”

At the final dinner that the couples would have together during the show, Mark tried to get them used to the idea that this would be the end for some of them, because their partners would fall in love with someone else. “For some of you, this is goodbye forever,” he said.

Before reuniting, the couples did spend the next day with the tempters, and that was a little more of an MTV reality show party atmosphere than before, and I wondered if this group of single people was really drawn to Temptation Island by the idea of meeting someone, or by spending a month in Maui and charging everything to USA’s tab. We’ll see.