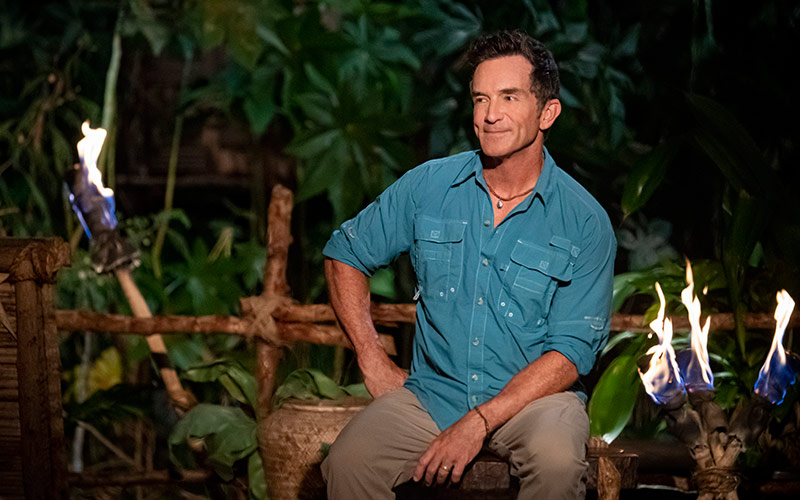 Jeff Probst at Tribal Council on Survivor: Island of the Idols (Photo by Robert Voets/CBS Entertainment)

During the Survivor: Island of the Idols premiere, in the middle of the episode, CBS aired a brief promo on which a narrator said, “Survivor will be right back after the following CBS preview.” That was fine, but the footage showed the Lairo tribe dipping their torches into a fire.

At that point in the episode, they’d not yet lost the immunity challenge. In other words, it spoiled a major plot point of the episode.

While the season premiere kept secret which player would be next to visit Sandra and Rob on the Island of the Idols, a CBS promo airing this past week reveled that it would be Kellee Kim.

The episode itself treated the reveal as a surprise, with a boat approaching the Vokai tribe camp. Its pilot handed the contestants a note that they had to read together, revealing that Kellee was chosen—which anyone who’d seen the promo already knew.

This is far from the first time this has happened on Survivor. Promos have given things away many times in the past.

But this time, Survivor host and showrunner Jeff Probst was so frustrated by these kinds of promos that he tweeted three times on Wednesday, actively encouraging fans to communicate their displeasure with CBS, and expressing annoyance that CBS didn’t allow the production a say in the ads promoting Survivor.

CBS and Jeff Probst have “resolved” the promo conflict

In a new tweet Jeff Probst just published, he says the issue has been “resolved,” although he doesn’t elaborate.

The second tweet above says that the production had “not earned the right to approve our own promo spots,” so perhaps that is the resolution: approval to ensure that the promos aren’t giving things away.

Here’s Probst’s update, which also acknowledges his strong feelings in his earlier tweets:

I appreciate Jeff taking CBS to task over this. As I’ve written before, I have no doubt he’s always trying to make the best show for fans, and here’s that trying to ensure that viewers discover what happens with the game as they’re watching.

Ironically, Probst chose to give some things away at the beginning of last week’s episode. They were not spoilers on the level of the CBS promos, though flashing forward

Instead of airing a title sequence with the players and the theme song, and instead of a “previously on Survivor” segment, we saw three brief flash-forwards, including to Kellee crying on the beach after her return from Island of the Idols.

“It started as a big picture idea that centered around wanting to engage the audience even more in the mystery of each episode. We experimented with several different ways we might achieve this and settled on replacing the ‘Previously on…’ with a look forward at ‘What’s about to happen…’ but in a way that brings up more questions (mystery) than answers. We still have some other ideas we may play with in the future but for now this is what we’re doing! We enjoy trying new ideas in the editing bays and the feedback has been positive so we’ll continue doing it. The format of Survivor always remains the same, but what you do within that format is where the fun lives.”

If you’re missing the Survivor theme song, credits, and intro as much as I am, there’s a video playlist below with the intros for seasons 1 to 37, some of which didn’t actually air on TV (they were produced but not used on-air).

I’ve been listening to it while writing this, and it’s incredible how so many of those connect me back to a moment in time. I miss it a lot!

If you’re wondering why the theme song and credit sequence has been cut, read this: All the things Survivor has lost, and whether they’ll return.

Also read my interview with Survivor’s former composer and the composer of Survivor’s theme, which includes why he decided to leave the show.