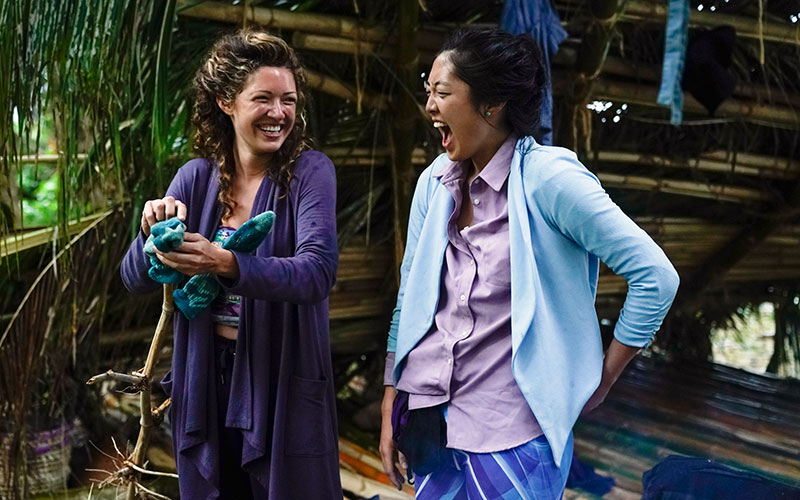 Survivor is as much a study in human behavior as it is a strategic game, in so much as we see the patterns emerge season after season about how people behave when they’re in this high-pressure, low-comfort environment.

In episode two of Survivor: Island of the Idols, there was more of what we’ve seen before: hurt feelings, ego, and, of course, a blindside. Often, people just can’t help being themselves—or being human, I suppose.

Aaron, left out of last week’s vote, responding to his hurt feelings by making empty threats (“Their day will come”), while Noura annoyed everyone by telling them what to do.

Meanwhile, after Molly was blindsided and voted out, she said, “I’m stunned, hurt, and frankly dizzy from this blindside. I have seen so many blindsides on Survivor and you’re always kind of like, How did they not know? and I truly did not know.”

To us, it was so, so obvious that Molly was in trouble and Noura was not. That’s because the editing was as subtle as those Rob and Sandra heads. Molly said, “We’re going to make an easy vote, we’re going to have a nice afternoon, and life will go on. Let’s not mess it up,” and then Jamal took a midday nap.

At Tribal Council, Dan confirmed what was going to happen by saying their decision would be “a little level smarting than Who’s irritating me today?” And of course, the irritant was Noura.

Noura, though, had something other players haven’t always demonstrated (or we haven’t always seen): remarkable self-awareness. She crystalized the experience perfectly at Tribal Council. “You start to look back at your actual life and realize, like, okay, some of the problems happening in my actual life are being magnified in this game,” she said.

Noura called the blindside the “revenge of the nerds,” though her high school must have been very different from mine. I wasn’t a nerd—I wasn’t smart enough—but I certainly wasn’t one of the popular kids, and at my schoool, neither the nerds nor the newspaper kids walked around talking nonstop and telling the popular kids what to do. (That montage of her talking was brutal. I wonder if basically anyone could be edited to seem so annoying.)

Meanwhile, on the orange tribe, Chelsea started a fire and found a hidden immunity idol, if that counts as “hidden.”

Tom was upset about the fire, because, he said, “you just ruined my male ego for the rest of my life.” His ego really should have had a tag warning him it was so easily flammable!

Orange/Lairo won the reward/immunity challenge—water, ladder, ball—and along with it, some spices. I have never seen anyone so excited about spices in my entire life, but I am going to try to replicate their enthusiasm every time I walk down a spice aisle at a grocery store from now on.

Island of the Idols, and the lies Kellee and Elizabeth told

Rob and Sandra’s total on-screen time this episode was 7 minutes, 55 seconds, including 25 seconds of reaction shots at Tribal Council, out of a 42 minute, 52 second episode. That means they were on screen for about 18 percent of the episode. My unscientific methodology, and the running total:

Rob and Sandra have been on Survivor: Island of the Idols for 19 minutes and 43 seconds of 1 hour, 46 minutes, 33 seconds total running time, a total of 18.5 percent of the season.

That’s pretty consistent week to week: about one-fifth of the episode is spent with Sandra and Rob.

Kellee’s visit to their island—spoiled by previews, which we’ll get to soon—started when yoga on the beach was interrupted by a crew member in a boat, who handed the tribe a note that said, “Kellee must get on the boat and head to the Island of the Idols.” (She was chosen, at random, by last week’s visitor, Elizabeth.)

In an interview conducted after she went there, she said her thought upon approaching the island was, “maybe Cochran’s going to pop out of the bushes.” That was pretty much it!

I was so impressed with how Kellee picked up on the line about being tested, and although Sandra and Rob deflected it, she must have been thinking about that as the two started to ask her personal questions and then start going on about themselves—or in Kellee’s words, “jabbering, jabbering, jabbering.” As she told us, “Okay, what is going on? What is happening? What is the point of this?”

Excellent question! Kellee’s lesson felt like they ran out of lessons already, in episode two, because there was no actual teaching nor practicing, and the point was obvious. Sure, it’s important to listen to your fellow players in a social game. It’s also important to hold your breath while underwater. Is that next week’s lesson?

Kellee gave the episode its title with “YOLO: Let’s play,” because she, too, decided to risk her vote at a chance at an idol. However, deferring to Rob’s challenge at first got her an easier challenge: three answers out of five, to get an idol good for three Tribal Councils.

The questions were not difficult, especially the one about the branch of the military Sandra’s husband was in, as Sandra was literally wearing an Army hat. There was also the question about what color Sandra’s shirt is, and what game Sandra has won on CBS twice. (Okay, I made those last two up.)

Upon returning to camp, Kellee also chose to lie to her tribe about the Island of the Idols. While Kellee added the detail of the giant heads, but didn’t say they were of Sandra and Rob, she basically gave the same urn-smashing cover story that Elizabeth did.

As Survivor podcaster Colin Stone pointed out on Twitter, “She lands on…the exact same lie as the person from the other tribe. Got it.”

That similarity is suspicious, though on the other hand, this season went into production shortly after Survivor Ghost Island premiered, so it would have been at the forefront of their minds. Its twist is very similar, of course, so perhaps I shouldn’t be surprised that they landed on the same cover story.

I don’t understand the point of the lie, though. I totally understand not being honest about having an idol—and Kellee hiding hers in her hair was amazing, and so was her crying “search me” move—but since Rob and Sandra will eventually be revealed, doesn’t that make you more of a target since you lied to everyone about something that didn’t matter?

My question: Did the production instruct them to lie? Did Sandra and Rob?

“Rob and Sandra remind her on the way out: ‘What are you going to tell everyone? You have to be thinking all the time about the lie.’ She formulated a lie [about the Island of the Idols], it sounds like it went over well with the tribe, and then we come to Tribal Council tonight, and have a devastating blindside.”

But he told EW’s Dalton Ross the opposite, that producers had no idea if the cast would choose to lie about the Island of the Idols or not:

“That was the one thing we were the most curious about: Would players keep it a secret or would they expose the entire thing? I was very impressed that out of the gate, Elizabeth, the first visitor, lied about what she experienced. I would do the same thing. There is no way I would give any other player any kind of advance knowledge of what to expect, especially when I know they will have a chance to play for an advantage.”

These seem contradictory to me, though neither directly addresses it: We told the contestants they were not allowed to tell anyone about the Island of the Idols.

I think this matters because forcing them to keep it a secret has the potential to affect their game. Then again, so does being taken away from camp during key conversations, or going somewhere where there will obviously be advantages.

This episode, Survivor replaced the “previously on Survivor” segments with a version of what other reality shows have done for years, though to a much more obnoxious degree: previewing the episode.

Even though this was just three flashes of future scenes, including a post-Tribal Council discussion that would come within seconds of that opening preview, I’m not a fan of this. It added nothing to the episode.

Jeff Probst explained to Dalton Ross that this emerged from “wanting to engage the audience even more in the mystery of each episode.”

Also, these flashes feel positively pointless considering CBS’ absolutely nutty marketing this week and last. Last week, there was a mid-episode spoiler that revealed which tribe was going to lose the immunity challenge and go to Tribal Council. A promo airing this week revealed that Kellee would be visiting the Island of the Idols.

Interestingly, these promos irritated Jeff Probst, too—so much so that he called CBS out in three tweets, one of which encouraged fans to “continue complaining” to CBS:

Complaining to CBS: that’s a Survivor twist I can definitely get behind.