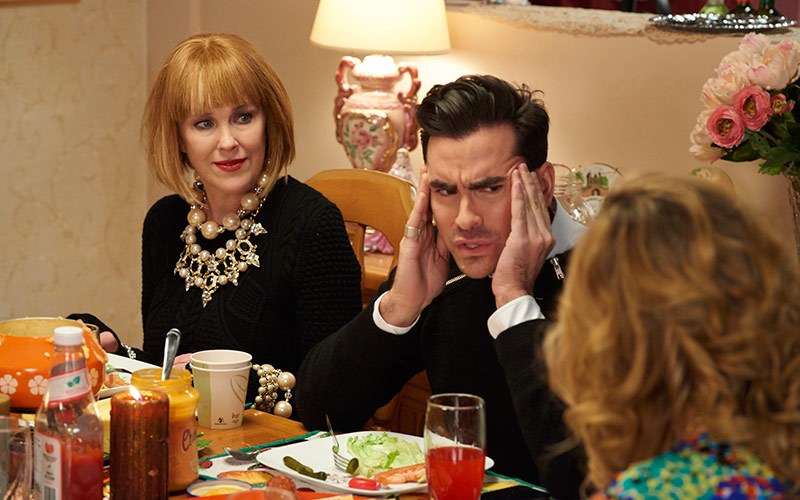 The very first image on Schitt’s Creek season one, episode one might be very familiar to reality TV fans: it’s an overhead shot of The Real Housewives of Beverly Hills star Lisa Vanderpump’s former mansion.

Vanderpump’s Beverly Park mansion is not Schitt’s Creek‘s only connection to reality television. In fact, the entire series owes its existence to reality TV.

In the show, the 17,000-square-foot home belongs to Moira and Johnny Rose, and their adult children David and Alexis, but only for a few moments of TV time. In that first episode, the characters discover that they’ve lost all their money, and have to relocate to a motel in Schitt’s Creek, a small town that they once bought on a lark.

The series, which airs on Pop and then gets syndicated on Netflix—the fifth season just arrived last week—is reaching something of a cultural crescendo right now.

It was nominated for its first Emmy and TCA awards this year. Catherine O’Hara and Eugene Levy both received Emmy nominations (lead actor and actress in a comedy series), though neither won.

The show itself was nominated in the outstanding comedy series category alongside Fleabag, Barry, Russian Doll, The Good Place, The Marvelous Mrs. Maisel, and Veep. Look at that list! I don’t know if I’ve ever seen a more perfect Emmy category, and one in which I would be thrilled for any of the series to win. (Fleabag won.)

The show has gotten traction beyond award nominations: it’s been gaining in popularity. Vulture’s Joe Adalian detailed the show’s rise, writing that, “Since launching on cable’s Pop network in 2015, the show has seen its linear ratings more than double and its overall audience soar past 3 million viewers.”

Since 2017, when it joined Netflix, new seasons air on Pop each spring, and then arrive on Netflix in the fall. If you don’t have Netflix, you can also stream it for free: Pop has the first five seasons, and CW Seed also has all five seasons, free.

Creator Dan Levy, who also stars in the show as David, told TV critics at the January 2015 Television Critics Association press tour that Schitt’s Creek was born when he “started thinking about the show: the idea of a wealthy family losing their money.”

But there’s more: Levy elaborated on the show’s origins, telling Out Magazine in 2015 that it all began with watching reality TV shows:

“It really just started with me being in Los Angeles, knowing that I wanted to write. I had been watching some reality TV at the time and was concentrating on what would happen if one of these wealthy families would lose everything. Would the Kardashians still be the Kardashians without their money?”

Levy told TV critics in 2015 that concept “could go in two directions. It could go sort of as a sitcom, or it could be played very real, and that’s when I thought of my dad because of everything that he’s written with Christopher Guest and all of those movies and the sensibility that he brings and the heart that he brings to all his film and television roles. And, yeah, I thought it was a good fit. So we started talking.”

His dad, Eugene, joined the show as his character’s father; his sister, Sarah Levy, plays Twyla Sands, who runs the cafe in Schitt’s Creek, Café Tropical. (By the way, while the café is not an actual restaurant, the building used for exterior shots is in Goodwood, Ontario, at an intersection where the buildings used as Rose Apothecary and Bob’s Garage are also located.)

Schitt’s Creek was pitched to networks such as HBO and Showtime, who rejected it, and while ABC was interested, though Eugene Levy says he was nervous about its “historic penchant for micrmanaging showrunners,” Vulture reported.

Ultimately, the show went to the Canadian Broadcasting Corporation, in partnership with the then-new network Pop, which was born from the old TV Guide Network. Pop—which airs Big Brother: After Dark during the summer—is run by Brad Schwartz, who had previously worked at MTV Canada, where he hired Levy to host an aftershow The Hills which became very popular.

In its five seasons so far (it’ll end after season six), Schitt’s Creek has changed and evolved from season to season, which is part of the joy of watching it.

I binge-watched all of it this summer, and while the absurd humor drew me in, I loved how it evolved from silly farce to a surprisingly emotional portrait of human connection: friendship, romance, family. Like Parks and Recreation and other ensemble comedies, it took a while to find a groove, but once it did, it rocketed forward.

Schitt’s Creek works because of its richly drawn and ridiculous characters, who’ve embraced their Kardashian-ness while continuing to grow and evolve. They’re an exceptionally watchable group, thanks to the actors.

Just watching Catherine O’Hara say “Alexis” is more entertainment than entire episodes of Keeping Up with the Kardashians, though I’m grateful to the Kardashians for inspiring such a wonderful show.