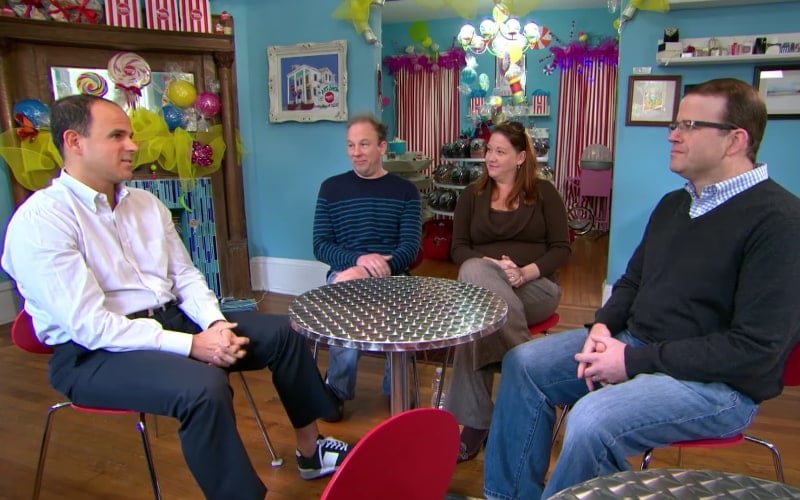 Marcus Lemonis meets with Sweet Pete's Peter and Allison Behringer, and their business partner Dane Baird, during an episode from The Profit season two.

Podcasts are being been adapted into TV shows at a fever pitch—Startup, Homecoming, Dirty John, 2 Dope Queens to name just a few—and TV shows have companion podcasts, but starting today, a popular reality TV show has become a podcast.

But what’s unusual and new is that The Profit’s podcast is just audio from its full episodes, meaning that you can now listen to old episodes while, say, going on a run, commuting to work, while you’re at work, or mowing the lawn.

There are other examples of TV shows distributing just their audio, especially in news: 60 Minutes and other CBS News shows are available in podcast form, as are ABC News shows, CNN’s shows, and MSNBC’s shows, to name just a few. Those are free, while FOX News charges a subscription to get its prime-time shows as podcasts.

CNBC has other podcasts, but only its news, information, and commentary; this is the first prime-time entertainment show to be released in podcast form.

And this is the first reality TV show I know of that’s distributing its audio as a podcast, and a search didn’t uncover any others. (Let me know if I’m missing something!)

There’s no new content except a super-brief bumpers, such as Marcus Lemonis saying, “You’ve been listening to The Profit: The Podcast from CNBC. I’m Marcus Lemonis. For more of The Profit, subscribe today wherever you listen.”

CNBC said that new episodes “will be published every Tuesday” and they “will unlock stories from the past six seasons.” Again, “unlock stories” seems to mean just making those episodes available as audio downloads, nothing else.

I listened to the “Sweet Pete’s” episode this morning, and it was an odd experience. That’s because I’ve watched all of these episodes, sometimes more than once, and thus I couldn’t exactly experience it as audio only: I’m remembering the accompanying visuals, and also thinking about what we’re missing during silences and pauses.

But there are also several TV shows that I only half-watch, focusing on other tasks as they play in the background, so I can understand the appeal of a downloadable, portable version of a TV show.

And this is also one way for CNBC to monetize old episodes while also potentially bringing new viewers to the series—which is returning for a new season soon.

CNBC announced the podcast version of the show along with The Profit season seven’s premiere date, which is Nov. 5. New episodes will air Tuesdays at 10, as usual.

The network’s description suggests a slightly new focus for these episodes: “This season, Marcus lends both his expertise and understanding to foster personal growth into financial growth,” according to a press release.

In that release, Marcus is quoted as saying, “The Profit is a show about business, but it’s also about the people in business. For me, it’s not just a financial investment, but rather an opportunity for a real transformation that helps set these business owners up for success.”

Some of the people Marcus visits in one episode are the residents of a small Illinois town on the Mississippi, Grafton, that’s most recently been affected by a 127-day flood that damaged homes and businesses and led people to move away; FEMA denied assistance to the state after the flood.

CNBC says that Marcus will visit Grafton to try to “resuscitate this American town.” Here are the businesses he’ll visit, which are in alphabetical, not airdate, order: