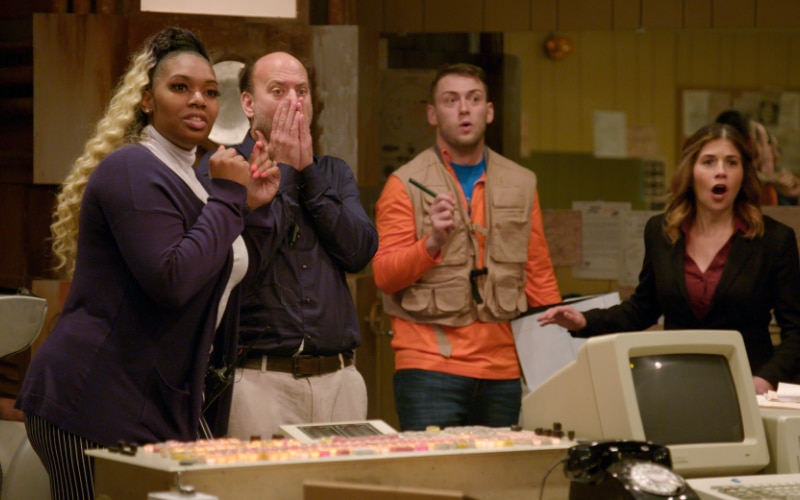 Some of the marks on Prank Encounters, perhaps when they get surprised that they're on such a terrible show. (Photo by Netflix)

I will admit that, when a teddy bear came to life and ran across a balcony in the first episode of Prank Encounters, I laughed: it was quite the image.

But Netflix’s attempt to create its own Scare Tactics is mostly embarrassing, for Netflix and everyone involved in creating such a dull, unconvincing mess. The marks may have been momentarily freaked out during the climax of the scares, but the only frightening thing about Prank Encounters is that it exists. Maybe the actual prank is on us?

First, a disclaimer: I’m not the biggest fan of scary or cruel prank shows, in part because their stars have not consented, in advance, to being subjected to emotional distress.

That’s why I was surprised to learn, from Scare Tactics creator Scott Hallock, that on his show, all of the marks had previously applied to be on reality shows before they were filmed, and thus they were actually cast as a result of their application. They still didn’t know they were on a show, of course, but they also weren’t just random people seeking a part-time job who then got tricked into becoming entertainment.

Prank Encounters producer Kevin Healey told EW’s Lynette Rice suggests that something similar might have happened here, saying that “we go through a process for them to do a one-day gig.” He’s not more specific than that, and his vagary isn’t challenged (#journalism), nor is his claim that everyone “left super happy.”

I sure didn’t, and I only watched half of the eight episodes. What crept up on me in each episode was boredom, and once I even heard unconsciousness scratching at my door, which was probably my brain trying to rescue me.

Scare Tactics usually did four scares in about 21 minutes; Prank Encounters episodes last for between 20 and 25 minutes, and have just one scare that entire time.

That’s blood-curdling: watching your life disappear in 25-minute increments of a show from Netflix, a company that once was trying to produce better versions of popular unscripted shows.

This mess was produced for Netflix by Propagate, which previously embarrassed themselves producing a reality show for a giant tech company with a knock-off of another show, Shark Tank (theirs was called Planet of the Apps).

The show got a lot of pushback when it was announced because Netflix initially described it as a show where “two complete strangers who each think they’re starting their first day at a new job” were pranked and their “part-time jobs turn into full-time nightmares.”

That made it seem cruel. What it ended up being, though, is a bad idea ineptly produced.

The first prank, which I have to assume is what Netflix thinks is the best episode to keep people watching, is both convoluted and boring.

A mark is hired by a woman to babysit. Meanwhile, a second mark is hired to help collect toys for a charity. The kid, who’s an actor, insists her sister died because a teddy bear pushed her off the balcony. Charming!

Eventually the bear comes to life and pushes an actor off the balcony, after the actor spends a suspicious amount of time leaning over the railing.

Yet none of this is scary.

Gaten Matarazzo’s on-camera involvement is, well, odd. He’s in charge of letting everyone know they’re on a prank show no one has heard of, though he also says “Netflix” and presumably people have heard of that.

Before that moment, though, he spends the episodes sitting in an alleged RV/control truck that has more choreographed blinking lights than the Starship Enterprise.

Matarazzo’s acting doesn’t serve him well here, whether in voice over or asides. (“How are we doing at the other location,” he says in episode two, leaning back in his chair like people do in control rooms. “All right, guys. Let’s do this,” he says in another episode, with all the same passion I would employ in saying, All right, Netflix. Order another season of this.)

He periodically talks to the actors, presumably through some kind of earpieces, and either 1) he’s doing that in the most unconvincing way imaginable and/or the editing is making it look completely fake, or 2) all of his host segments were filmed after the fact and wedged into the episode.

Whether or not he’s actually talking to the actors, there sure are a lot of them, an excessive number of people wandering around (including, in episode two, an actual camera operator, pretending to be an employee, I suppose).

They hang around for the jobs the marks are supposed to have been hired to do. In that first episode, “Teddy Scare,” there’s a maid who works at the house and basically stays with the mark the whole time. Why is a babysitter necessary? Why is the maid wearing the most stereotypical maid outfit possible?

The “alien baby pops out of a man’s stomach while a temp assists with surgery” episode, “Urgent Scare,” has two government agents who run in and yell about a lockdown, but they could have screamed, We’re actors! And we’re really bad at acting! and they would have been less conspicuous.

Many of the actors keep issuing irrational instructions and exposition, answering’ the marks questions with weak answers. This may not be the kind of thing someone would notice in the moment, but it clutters the scenes and diminishes the believability.

All of this reaches the point of holy shit, we really didn’t plan well for this when one of the two “Teddy Scare” marks desperately tries to wrestle a phone from one of the actors to call 911—she is a sane, rational human being—and he refuses to give it to her, so the other mark comes in to help fight him for the phone.

Part of what works with Scare Tactics is the low-budget minimalism, both in set design and other humans. The marks were sometimes left alone, or with just one other person, when they encountered something weird. Also, it was gleefully cheap and ridiculous.

Everything Prank Encounters does is overwrought, including its environments, which are like what would happen if you gave a middle school production a lot of money for their set design.

In “Teddy Scare,” the house is full of odd, mirror-covered furniture (where the cameras are hidden, of course). Episode two, “End of the Road,” mostly takes place on a road which reminded me of the old interior scenes of Test Track at Epcot.

Its climax occurs with the marks and several actors in a van that has so much bright and excess lighting that one of the marks keeps shading her eyes just to be able to see. If only I’d decided to spend an hour shining a bright light in my face instead of watching Prank Encounters.