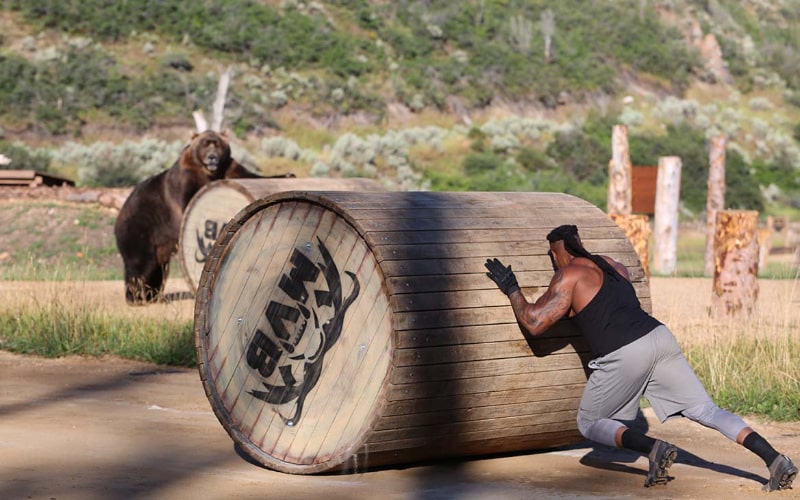 A man competes against a bear on Man vs. Bear. (Photo via Discovery)

From the network that brought us Man vs. Wild, and the species that mauled a man to death in the documentary Grizzly Man, comes a new reality competition that will combine the two titles and literally have bears competing against humans.

Yes, the Discovery Channel’s Man vs. Bear takes challenges from The Challenge and adds bears. If this sounds batshit crazy, well, yes, although it turns out the bears are actually trained movie and TV stars, one of whom was in Game of Thrones. Just look at the expression of the bear’s face in the photo above: it knows what a star it is.

The bears—their names are Bart, Honey Bump, and Tank—are actually trained bears, and have starred in films including Legends of the Fall, Without a Paddle, and Dr. Doolittle 2.

Bart the Bear 2 even has his own Wikipedia page, and starred recently in Game of Thrones season three, episode 7, “The Bear and the Maiden Fair.”

The bears come from Wasatch Rocky Mountain Wildlife, which says it has “has provided animal stars for over 25 major motion pictures, hundreds of TV shows, commercials and documentaries.”

Its site says owners/trainers Doug and Lynne Seus’ “pride themselves on supplying the film industry with the most highly trained bears and wolves available. Bears and wolves capable of not only behaviors and commands, but characterization.”

Discovery doesn’t mention that they’re trained bears, but does describe how the actual competition will work:

“Each episode will include five distinct challenges inspired by what bears do naturally in the wild, pushing these brave men and women to their absolute limits. In the final round, the top two competitors will come face-to-face with Bart, who stands 8 feet 6 inches tall and weighs 1,400 pounds. The human competitor who earns the most points of the day will be named champion.

But the competition isn’t over yet. At the end of the season, the top three competitors with the most points will return one more time for the super-human showdown against the bears.”

That’s presumably referring to Bart the Bear 2, because Bart the Bear died in 2000, having starred in The Bear. Then again, a zombie bear would make for a hell of a final challenge.

Despite the title, Discovery tells me that some contestants are women. Only one contestant, an MMA fighter named Ira, is quoted in the press release saying, “Competing against bears is both scary and exciting. It’s competing against the unknown. This is a completely new challenge for me.”

I’m curious how this will work, and if giving trained bears instructions means they’ll do their best, or just show off for the cameras in order to get more Instagram followers.

We will get on-camera commentary during Man vs. Bear, from Casey Anderson (a frequent reality TV host and star who’s had his own shows on NatGeo WILD and also founded Montana Grizzly Encounter) and Brandon Tierney (“an Emmy Award-winning sports commentator and host of CBS Sports Radio’s nationally syndicated show Tiki and Tierney,” according to Discovery).

They’ll explain what’s happening as the bears tear the humans to pieces and throw body parts around. I mean: compete in challenges.

The show comes from the production company behind Married at First Sight and the Little Women franchise, Kinetic Content.

I do think this may be the start of an international franchise with endless possibilities for spin-offs. For example, Animal Planet could have Bear vs. Bear, and if Logo was still airing original shows, they could give us Twink vs. Bear.

Update, Nov. 4: PETA released a statement about the show, attributed to PETA’s assistant manager of animals in film and television, Lewis Crary:

“It’s 2019—not pioneer days—and it’s time that the Discovery Channel discovered that animals are not ours to use for entertainment. For decades, Doug Seus has exploited animals for movies and TV shows. His for-profit facility is a training compound where he makes wild animals his meal tickets. There are true, reputable sanctuaries in the U.S., and none of them would ever use bears for a sickening stunt like this series. When Seus pimps out bears for prime time, he sends the dangerous message to viewers that wild animals are safe, approachable, and ours to control. But they don’t belong in the circus, at SeaWorld, or with trainers who provide cheap tricks for sad reality TV. Shame on the Discovery Channel for normalizing exploitation.”