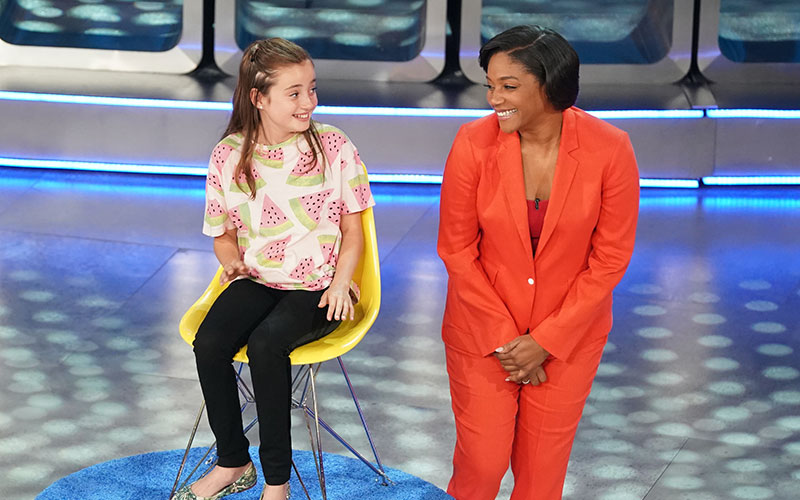 Sofia and Tiffany Haddish on the Oct. 20 episode of Kids Say the Darndest Things (Photo by Eric McCandless/ABC)

Kids Say the Darndest Things, which first premiered on television 67 years ago, is back again, hosted by comedian Girls Trip star Tiffany Haddish.

Now on ABC (Sundays at 8), the series has expanded to an hour and features interaction with kids in front of a studio audience, plus more elaborate bits that are filmed on location. Are the kids actors? Do the producers know what they’re going to say? Why is Tiffany Haddish hosting the new series? Answers to those questions and many more are below.

The answers come from the Television Critics Association summer press tour in August, when Haddish and executive producers Eric Schotz and Jack Martin talked about the new production, and what was involved, from casting to filming.

Why is a CBS show on ABC? Is Bill Cosby involved?

Kids Say the Darndest Things began as a segment on another series: Art Linkletter’s House Party, which first was a radio show, and then aired on CBS from 1952 to 1969.

Later, Kids Say was revived as a 1995 TV special and then 1998 to 2000 CBS series, which was only hosted by Bill Cosby, the former comedian who’s now in prison after being convicted of drugging and sexually assaulting Andrea Constand.

CBS still owns the show—“the IP belongs to CBS,” Schotz said—and CBS Television Studios is producing the new series for ABC (along with Anvil 1893 Entertainment and She Ready Productions).

Why was Tiffany Haddish chosen as the new host?

Schotz, who’s producing under his new company Anvil 1893 (his earlier company was LMNO Productions), previously “created Seriously Funny Kids hosted by Heidi Klum for Lifetime and served as executive producer/creator of Kid’s Say the Darnest Things for CBS,” according to his bio.

So, he has experience with these kinds of shows. He told TV critics that, when Haddish’s name came up, “we went to her stand up act” to watch her perform. He told this story, paraphrasing what Haddish said in her act:

“She grew up in foster care and went from house to house, and they gave her a garbage bag to go from place to place. And she said if she ever had any amount of money, she would do something to create a foundation to help these kids and give them suitcases. It didn’t sound like much, but it said it gave them identity.”

For him, as a reality TV producer, that story illustrated something critical for him:

“Oh my god. She has an empathy that can’t be taught. She relates to these kids in a different way. Whether they’re high end, middle end, low end, she treats them all with such respect, and listens to what they have to say. And that is the dynamic that allows the comedy to come out.”

She is also, of course, a star and a name people will recognize, and may tune in for her rather than the kids.

Her presence could also have the opposite effect. Variety’s Daniel D’Addario didn’t find Haddish’s skillset a fit for this series. In his review, he wrote that because she’s “a competitive comedian, [she] can’t help but mug over the kids she’s supposed to be introducing, and redirects the conversation perpetually to her celebrity status,” and thus the kids “are supporting players to Haddish’s brash lead, and they either attempt to meet her energy in a manner that never seems uncoached or tap out, seeming vaguely unmoored by the situation and its chaos.”

How quickly did it film?

Pretty quickly: in just a couple weeks. That’s one way that ABC (and other networks) are able to land A-list talent to host shows, like Alec Baldwin hosting Match Game: it doesn’t take much time.

Tiffany Haddish said it only required two weeks on her schedule total. In about five or 10 days, she said, they filmed the live studio audience segments, and then shot the other bits.

“It’s basically five days of live audience, me doing opening monologues. So we’ll do maybe one in the morning, one in the evening. We’ll do the kids. I’ll interview all the children in the middle” she said. “It’s like a late night talk show, but with kids.”

Producer Jack Martin said that the “middle” part can involve a lot of work: on one day, there were eight panels of kids to interview and film with.

“She’s doing a million different things all across the world, but Tiffany is focused,” he said. “Try putting yourself onstage with three six year-olds for 30 minutes at a time. One day, we shot eight panels, among other things.”

How much time do they spend with kids saying the darndest things?

The stars are children, and besides labor laws, there are also short attention spans to contend with.

Haddish said she spent “maybe 20 minutes” with the kids, and Schotz said, “You’re dealing with kids in elementary school, so the average is going to be somewhere between 15 and 30 minutes—[that] is the max. At that point, the kids are generally done.”

Are the jokes ‘too risqué’ for kids?

In one of the promos for the show, Tiffany asks a kid who has a bowling ball business, and she asks him about his sales pitch to his clients.

The kid tells Haddish, “I ask, ‘Would you like your balls polished or cleaned?'”

Tiffany replies, “I had that same job at about 22.”

A critic said to Tiffany, “‘Polishing your balls’—naturally, it goes right over the kid’s head. But don’t you think that’s a little too risqué to say in front of the kids?”

Here was her reply:

Tiffany Haddish: “Okay. First off, I didn’t say it. He said that.”

Tiffany Haddish: “He said that. And he is referring to his job.”

Question: “I do understand that, but you played the double innu…”

Question: “Yes, for the laugh in front of the kid. Don’t you think, with all kids are exposed to these days, that that might be a little too risqué?”

Do the kids rehearse? Is what they say pre-planned or scripted?

I asked Haddish and the producers about how much pre-planning is done with the kids. Specifically, I said, “How much do you know what they’re going to say? Was that [the ball-washing comment] an answer that kid gave before he got on stage?”

Schotz said, “None of the kids are told what to say. That comes from them. But more importantly, they’re not told what not to say. They’re themselves.”

Haddish said, “I only know maybe a few things. Like, that young man, I knew that his mom and dad worked at a bowling league and they put stuff together for adults for bowling, and that he wanted a job, and his job was to polish all the bowling balls. That’s what I know. … I didn’t know how he was going to describe the job. I didn’t know what other things he talked about a lot of really cool stuff. And these kids are really smart. One of my favorite things in the world is to just sit and talk to kids. And really I ask maybe two questions, and then they just go. You learn so much from them. I am where I’m at in life right now because some kid told me I need to get it together.”

But the producers and kids absolutely do some preparation, which means the production has an idea of what might be coming.

Producer Jack Martin said that, during the casting process—after an open casting call, which drew thousands of kids—“we put them in a situation kind of like this as far as they have to come in and meet with the producers behind a table to make sure they’re prepared to go to the stage, because the worst thing you want to do is a kid in a small environment freezes up and goes out onstage in front of 300 people and just loses it.”

During that time, he said, “we talk about their interests, and we try to do our best job as producers to find out what they’re going to say or what their beat’s going to be.”

However, because they’re kids, about half the time they say something completely different on stage than they did in their pre-interviews. “It’s about 50/50 whether they walk out and we say, Oh, you love baseball. ‘No.’,” Martin said.

“And then that’s where having someone as talented as Tiffany, who can go, All right. Well, I guess we’re not talking about baseball. That’s what we were prepped on. What are we talking about today?‘ So we have an idea of what we want to talk about. Half the time we just throw it right out the window.”

How were kids cast? Are they actors?

The application itself says the show was:

“…looking for kids aged 4 to 11 years old who are fun, funny, opinionated, talkative, passionate and inquisitive. We want to meet collectors, experts, and kids with special talents. We’ll be featuring kids that have strong opinions or feelings about a given topic. We need funny kids who are not professional actors but just being themselves.”

Executive producer Eric Schotz reiterated that at TCA. “We don’t hire professional kids. We’re not looking to get professional kids to come on the show. We’re looking for regular kids, and there are millions of them out there that are not necessarily in Los Angeles,” he said.

Damian Holbrook: “How do you vet out the kids who are trying to get on the show to really perform? Because there’s nothing worse than seeing a kid who’s putting on a show and trying to be, like, adorable, because that’s just horrible. So how do you find kids that are actually just normal kids?”

Tiffany Haddish: “You’re mean. That’s mean. I was that kid at one time.”

Damian Holbrook: “Then you were horrible.” (Laughter.)

Tiffany Haddish: “I was hilarious. I used to dance and everything.”

That’s what she was asked by a critic, and Haddish said, “Yes. And [to] take my birth control.”