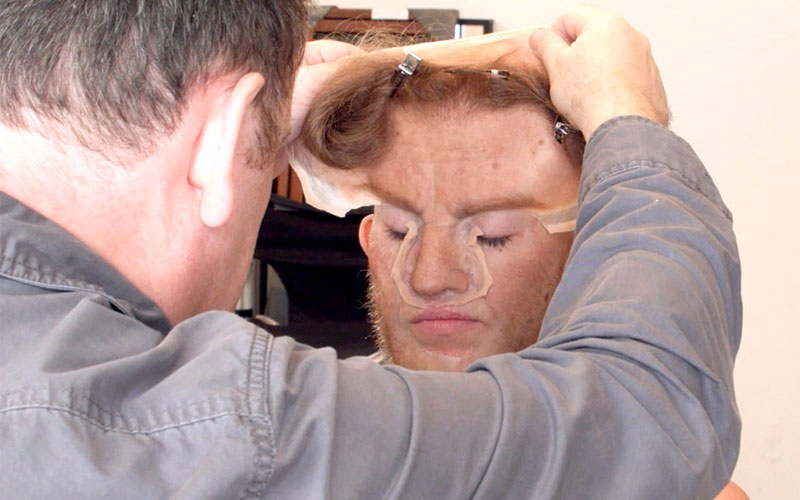 On Bravo's In a Man's World, professional pool player Emily Duddy, who goes by “The Billiard Bombshell,” is transformed into Alex to see if she'll be treated differently as a man.

The premise of In a Man’s World is that for women to prove that they’ve dealt with sexism they deal with on a daily basis, they need to become men. So in each episode of this four-episode limited series (Bravo, Tuesdays at 10), a different woman goes undercover, looking to see if she’ll be treated differently by the same people now that she’s presenting as male.

Their startling transformations into male characters give them the opportunity to surprise people and confront sexist behavior in the episodes’ climax, but In a Man’s World works best at exploring gender bias in its smaller moments.

This series is another departure outside of the Real Housewives box for Bravo, though it remains frustratingly inside that box in some regards, such as with the grating background music. (It’s that familiar Bravo music which is usually upbeat but sometimes throws in sad or angry sounds so we’ll know how to feel. It’s unnecessary, just as it was when RHOBH used it to illustrate a breakdown by by someone suffering from domestic abuse committed by a person who’d died by suicide by the time that episode aired.)

In episode one, Women’s Professional Billiard Association pro pool player Emily Duddy, who goes by “The Billiard Bombshell,” is transformed into Alex to see if she’ll be treated differently as a man while playing. As her nickname suggests, and as she discusses on the show, she uses her appearance and femininity to stand out in a male-dominated industry where she’s constantly subjected to demeaning comments that focus on her sex, not her ability.

In the second episode (Bravo provided the first two to critics), Atlanta-area politician Le’Dor Milteer becomes Roy to see if a focus group will respond to her differently as a father instead of as a mother. Le’Dor lost a 2017 election to another woman who was also a mother, but who made the case that she’d have time for politics since her kids were in college.

The last two episodes focus on religion (Sabrina is a preacher who “watches her male counterparts excel while she struggles to make a living,” according to Bravo) and family (Shital has to deal with “her parents’ dismay as they worry about her lack of focus on getting married and starting a family.”)

Before the women can test their hypothesis, they prepare. First, their bodies are measured and their entire heads are molded to create a cast so the Oscar-winning makeup effects team of Lou and Dave Elsey can create realistic makeup for them. They eventually get fitted with body suits that change their body structure, even giving them the addition of floppy fabric penises and testicles.

Vocal coach Tom Burke and movement coach Esco Jouléy help the participants change the way they walk and talk, so they won’t be recognized. In a Man’s World is at its best during those scenes, primarily because Tom and Esco are such excellent teachers and observers. (I want an entire show with just them, please!)

The insight they offer is more than just about becoming a character for an afternoon. It’s about the choices women make in presenting themselves to the world, and how men do the same thing. Their work starts to peel back the layers of gender performance, and how we’ve all been taught to behave in certain ways to align with our genitalia, and how we treat each other differently as a result.

Burke acknowledges, in the second episode, that they’re treating gender as a binary for the purposes of the experiment, but in reality it’s a pretty wide spectrum, and that’s just one of the moments that makes the process the most interesting part.

A moment later, Burke points out that the speeches Le’Dor wrote for herself as Le’Dor and as Roy are different, and has her write out the sentences to compare how one defines herself as a mother, the other defines her character, Roy, as a candidate who happens to be a father. Dramatic and revelatory sentence diagramming—on Bravo!

Both of the episodes I’ve seen have moments such as this scattered throughout, where the show taps against the glass and it starts to crack, but then quickly moves on before there’s a chance for the deluge of insight to wash over everyone.

For example, Le’Dor’s husband struggles with taking care of their two kids on the days she’s away to film the series. He also responds in a fascinating way when he sees her in character for the first time.

In Emily’s episode, a producer points out that Emily receives the most harassment when she’s dressed in a way that makes her feel the most powerful.

Alas, the show has a mission, and it tends to breeze past those insights—about gender performance, about the way women hold other women to higher standards. That’s because In a Man’s World is building up to is a big moment where it can make its point.

Experimenting In a Man’s World

The arc of each In a Man’s World episode leads up to an experiment: Will people treat the episode’s star differently as a man? These are not, of course, scientific experiments, yet the design of the experiments is flimsy enough to undercut what they demonstrate.

The show—which was produced by Lucky 8 along with Viola Davis and Julius Tennon’s production company JuVee Productions—feels constrained by its focus on this one-day experiment.

Emily’s episode lays out the harassment she deals with and provides evidence (like the commentary from broadcasters during a professional pool competition) but then shifts its focus to a single person, someone she’s encountered in the New York City billiards world before.

This man, Finnegan, gleefully tells the camera that, in the pool games he organizes, “Only men can play. I don’t let women play. Don’t want ’em to play. They’re too slow. Most men don’t want to lose to the women. When I lost to a woman, I really don’t feel good. It’s the male ego: we feel that we’re more dominant.”

Somewhat suspiciously, this episode-one villain—whose full name is William Finnegan, and who’s nicknamed “The Godfather of Pool”—appeared in a 2015 truTV reality show, and promoted his appearance in this show.

The real issue for me is that he becomes the problem: not institutionalized sexism in professional billiards, but one guy who acts like an ass.

That makes him, and thus the show’s point about gender bias, more easily dismissible by those who are not inclined to believe that gender bias and institutionalized sexism are actual things: It’s just one guy! Not every man is like that!

Emily makes this case, telling the camera, “We’re trying to capture in, like, one afternoon what I’ve experienced my whole life, so I’m nervous it’s not going to work.”

Her episode also offers fodder for those who might be looking for evidence that treating men and women differently is somehow logical, not a choice humans have made. That’s because it focuses on actual competition, and opens by suggesting that Emily is a superior player to the man she’s competing against.

So what if she loses? Even the best athletes lose sometimes, after all. I won’t spoilt the outcomes, but a peripheral male character locks onto this.

Both Emily and the show address that, mostly by shifting the focus to how she was treated differently as a man versus as a woman. That happens both in the moment and with on-screen graphics illustrating the gender-related insults she was subjected to when she played as a woman versus those she received when she plays as a man.

The experiment in episode two also has design flaws: Before meeting with the vocal or movement coaches, Le’Dor first talks to a focus group as herself, and receives a lot of questions about her kids. (How the focus group responds to each other’s questions is as least as fascinating as how they respond to Le’Dor.)

Then, on another day, she returns to that group as Roy, and the response is different. But so is the candidate.

As Le’Dor, she presents her three-issue platform by focusing on her kids. As Roy, she spends much less time on her kids, and also begins her time with the focus group in an entirely different way: “I’m considering a career in politics because I think I’m the best man for the job” versus “I would like to maybe start talking about running for office.”

Does the focus group respond differently to Roy because of his masculinity and big floppy fabric penis? Or because Le’Dor has presented his candidacy in a different way? It’s probably both, but the experiment is muddled.

There’s another moment that slips by, too: The woman introducing the two candidates to the focus group actually introduces Le’Dor as “the lovely Le’Dor Milteer,” but doesn’t introduce Roy by referring to his appearance in any way, just his name (“Mr. Roy Davis”). Does that frame affect the audience?

And that’s my major grievance with In a Man’s World: instead of focusing on the systemic problem, it allows the focus to be on one person or one situation.

It has a compelling premise that can pry loose deeply ingrained behaviors and ideas, and there is insight that emerges from these anecdotal experiments, but what comes up during the excavation is the far more instructive and interesting material.