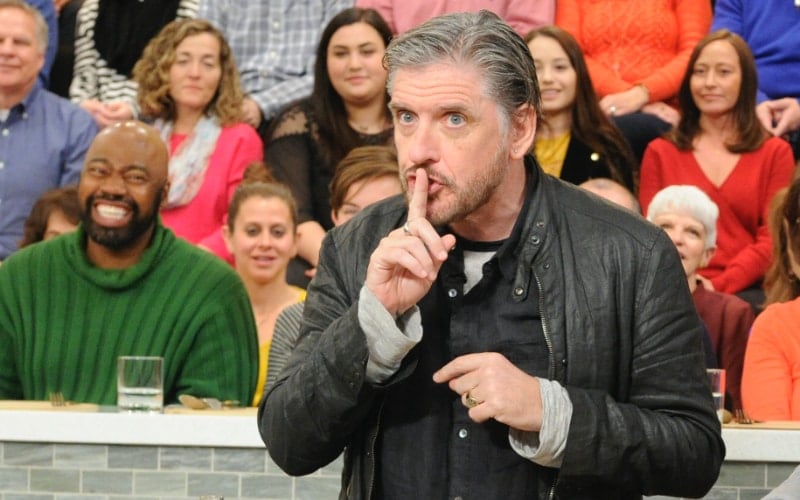 Craig Ferguson, the host of ABC's The Hustler, when he was on ABC's The Chew in 2017. (Photo by (Jeff Neira/ABC)

ABC announced a new game show today, and its format made my head turn around several times, because it sounds like a stripped-down, low-budget version of The Mole, one of the best reality TV shows ever.

The Hustler is even using similar language, calling the prize money the “pot” and naming the show after the secret agent who’s working for the producers. It doesn’t tie itself to The Mole, but the press release might as well have had a giant green thumbprint on it, as far as I’m concerned, because the core of the two shows is the same. But still: This is very exciting, even if it isn’t actually The Mole.

The new game show is called The Hustler, and it has five contestants, one of whom knows the answers and is working with producers. Two contestants will be eliminated, and then the three will try to figure out which among them is the Hustler, who will get all the money if the other two can’t figure out their identity.

Former CBS late-night host Craig Ferguson, who also starred on ABC’s The Drew Carey Show, will host the new series, and the format was created by Richard Bacon, a radio and TV host in the UK. Studio Lambert is producing.

Here’s how ABC describes the series, which will be produced this fall and does not yet have an airdate:

While that is very, very similar to The Mole, it also takes place in a studio and has questions instead of challenges set in spectacular European locations, so it will obviously be a lot more economical. Also, there are no tests, just a one-time shot at guessing who the Hustler is.

It also isn’t serialized, and with a new set of contestants—and new Hustler—every episode, people won’t have to watch the entire series to know what’s happening.

Bacon told The Sun that it was actually inspired by scripted television:

“It’s the essence of a really good whodunit, like Agatha Christie or Broadchurch. Broadchurch does this very clever thing where every time you go to an ad break, you change your mind about who the murderer is. You’re like, oh shit, now I think it’s the cab driver. And Agatha Christie does that as well.”

He also said that one goal is to get people to make assumptions in order to challenge their prejudices, since there will be clues about The Hustler’s identity (just like on The Mole!). Bacon said:

“…I think the most fun bit, in a way, is that you get these really personal clues about who it is. It could be anything from The Hustler is a big supporter of Donald Trump to The Hustler used to work in the CIA. And so if you’re matching this clue to someone, it brings out this finger pointing game of prejudice.”

ABC reality TV executive Rob Mills said in the press release that “It’s rare and exciting to have a mystery-based game show that employs viewers and contestants to tap into their sleuth skills. This fun, new format is the perfect addition to our dynamic game show lineup, and Craig’s unmatched wit and humor make him the ideal host.”

Update, Oct. 15.: As several people pointed out, The Hustler‘s format is very similar to two previous game shows: Dirty Rotten Cheater, a 2003 PAX series, on which one of six contestants is given answers to questions, and the audience and other players try to identify that person.

That came after The Enemy Within, a 2002 BBC game show that was hosted by Nigel Lythgoe—who went on to be showrunner of American Idol and now judges and produces So You Think You Can Dance.

And UKGameShows.com describes The Enemy Within as similar to The Mole:

“Imagine a game show where one of the contestants is a liar and cheat whose aim is to bring the rest of the contestants down. Well, that’s The Mole. Funnily enough, The Enemy Within is a bit like The Mole but in quiz form. You see, one of the contestants has been sent all the questions and answers a week earlier. The other contestant’s job is to work out which one of them is… the Mole, sorry, the Enemy. And it’s important they do just that otherwise the Enemy wins all the prize money everyone has accumulated.”

That description is so very, very similar to The Hustler that it could just be a revival of that show, though it’s being promoted as a brand-new, original format.

Watch Nigel hosting The Enemy Within: