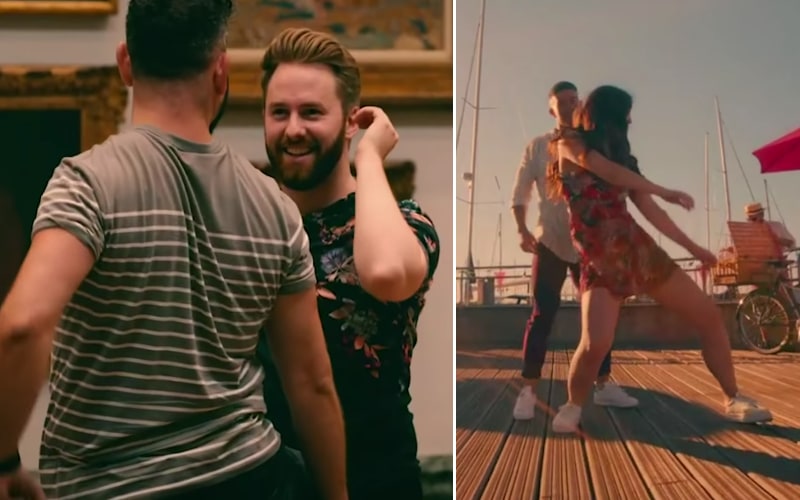 Two couples meet for the first time while performing choreographed dances on Channel 4's version of Flirty Dancing, which Fox is adapting for the US.

Fox has had wild success with The Masked Singer, which is now in its second season and is based on a format imported from South Korea (though the Fox version was based on Thailand’s adaptation).

Now, Fox is importing a new series that premiered earlier this year on the UK’s Channel 4, which combines blind first dates and dancing. It’s called Flirty Dancing, and has strangers dance a choreographed routine together before they even speak.

While Flirty Dancing is not quite a King of Mask Singer-level phenomenon in the UK, and only aired five episodes earlier this year, it was renewed for a second season.

Channel 4 said Flirty Dancing “left viewers and critics alike in love with the fresh new spin on the dating and dancing genres” with “an average [of] 888,000 viewers with a 6.0% share” and was “second in the timeslot amongst Adults 16-34 and first amongst Women 16-34.”

Watch three of the 10 first dances from the UK version:

I find those to all be super-charming, and the fact that they’re big production numbers—La La Land will probably be the most-obvious comparison—instead of just, say, ballroom routines, adds to the effect. While the dances involve some physical contact, like hand-holding or brushes against each other, there’s even more eye contact than anything else, which adds to the sensuality.

I also appreciate how the UK show cast a range of people, including two men who danced together (on reality television?!). Will the Fox show cast with similar diversity, or just go the broadcast network dating show route and cast only straight white people?

And why did Fox think that adding a twist was necessary? Just watching these dances and the connection that the couples have makes me question the twist—or maybe it’ll just make the episodes doubly exciting?

World of Dance season one and two host Jenna Dewan, who left after season two, will host Flirty Dancing. She’s an actor and dancer who’s appeared in Step Up, American Horror Story: Asylum, and Supergirl, among other TV shows and movies.

The format is simple, with elements of shows such as Dancing with the Stars and Married at First Sight:

“In the show, complete strangers are each taught half of a dance routine, then meet for the first time on a blind date at a breathtaking location, where they will then dance together without saying a word. In this romantic approach to dating, these singles will push themselves out of their comfort zones in the hope of being swept off their feet, rather than swept to the left or right on a phone.”

But Fox is adding a twist to that format.

Instead of two people learning a routine separately and then dancing together, they’ll dance with two people and then choose the one who they connect with the most:

“In a twist to the original format, the U.S. adaptation will feature singles who will perform a different choreographed dance with each of two potential love interests, before choosing the one with whom he/she has the strongest connection. While the singles may not all be professional dancers, the elevated choreography will tell a story reflective of their personal journeys to find love, while also providing clues to the other’s personality. Will it be love at first dance?”

Fox’s reality TV executive, Rob Wade, called this “a truly unique format—it’s unlike anything we’ve ever seen before. It’s fun, fresh and romantic, and broadens the dating format far beyond its traditional boundaries.”