home > Ex on the Beach 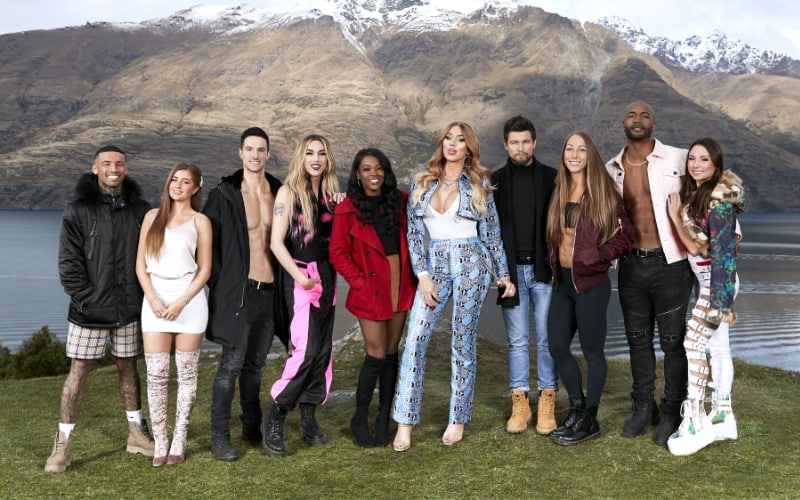 The central cast of MTV's Ex On the Beach: Peak of Love (Photo by MTV)

MTV is relocating its dating series Ex On the Beach from the beaches of Southern California to the mountains of New Zealand for season four, although it’s sticking with its title despite the shift to a winter climate, so it now has a somewhat inaccurate title: Ex On the Beach: Peak of Love.

For its cast, MTV continues to provide work for cast members from cable and network reality shows, including Adore Delano from RuPaul’s Drag Race, two of the singles from Temptation Island season one, and someone from The Bachelorette.

The Drag Race alum is clearly the biggest star this season, and is listed in the cast as Adore Delano, though an MTV press photo’s filename uses both “Danny” and “Adore.”

Adore identifies as non-binary, and two years ago, told Billboard, “I don’t even know where it starts and ends anymore—Adore is turning into Danny, Danny’s turning into Adore, and pretty soon I won’t know the difference.” And last December, when asked about preferred pronouns, Adore said,

“I prefer whatever the fuck people see me as. Courtney Act and I always talk about this and basically, we’re comfortable with whatever people are comfortable with. Maybe that comes from being insecure growing up. Although to be honest, I do kind of cringe when somebody categorizes me as one or the other but it’s never physically said out loud. Makes me want to throw something.”

The new season’s premiere Dec. 5, and episodes will air Thursdays at 9. Romeo Miller returns to host.

MTV says that it “brings 10 international celeb-reality singles to the mountains of Queenstown, New Zealand as they search for their true love, only to be unexpectedly confronted by their past relationships.”

Perhaps the relocation of the franchise to a different country and climate really did make the show’s conceit unexpected.

MTV notes that the show, which premiered in 2014 in the UK, now 15 different versions in various places around the world, including the US version.

Ex on the Beach: Peak of Love’s cast

Here are the 10 core cast members and their exes, with links to Instagram accounts and show titles and their hometowns, as provided by MTV: