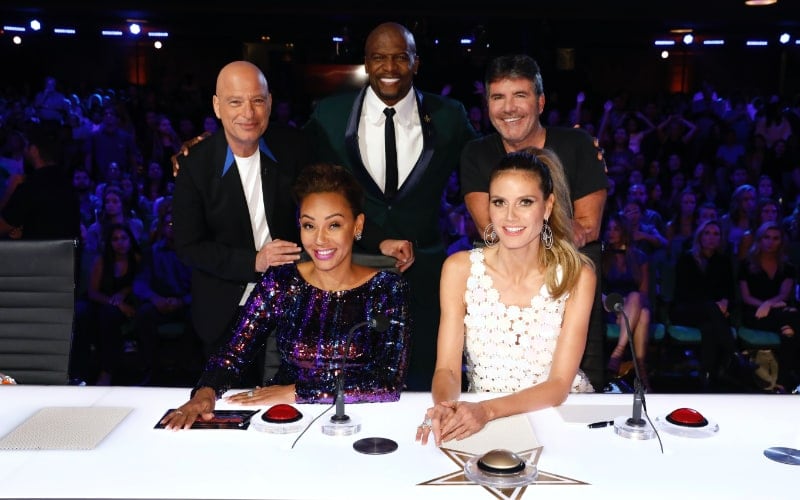 Everyone here, pictured during America's Got Talent: The Champions season 1—Howie Mandel, Mel B, Terry Crews, Heidi Klum, Simon Cowell, the Golden Buzzer—is returning for season 2, except for Mel B. She's being replaced by Britain's Got Talent judge Alesha Dixon. (Photo by Trae Patton/NBC)

America’s Got Talent: The Champions is returning for season two this winter, but it’s filming now in Pasadena, Calif., and information from both NBC and audience members indicates that the show is changing for season two. There are also spoilers online indicating which acts are performing.

Even though it’s likely the new season won’t air until January 2020, it started filming episodes on Oct. 3, and the finale will be filmed Oct. 21, according to On Camera Audiences, which still has free tickets available.

Heidi Klum is returning to the AGT judging panel for The Champions, and Britain’s Got Talent judge Alesha Dixon is also joining the panel, alongside returning judges Simon Cowell and Howie Mandel.

NBC announced the new panel at the end of September, and also said that Terry Crews—who hosted AGT: The Champions in January and then went on to become the host of summer America’s Got Talent—is returning as host.

NBC also said that “[a] panel of America’s Got Talent superfans will have the opportunity to take part in the voting process for the upcoming season,” and cast for those fans.

But at recent tapings at the Pasadena Civic Auditorium, I’ve been told by those with knowledge of the production that the entire audience is also voting via text.

Those audience votes are being used to determine which of the 10 acts moves on to the next round. That’s new for season two.

Here’s what we know so far about season two’s format:

Audience members were asked the state they live in, but also asked to identify which state they identify most with. In other words, someone from California could say they’re still connected to Ohio, and that could give AGT flexibility to argue that people from all 50 states are judging.

Last year, 50 acts performed, chosen by the judges and, separately, a mysterious panel of “super fans.”

Since the show wasn’t airing live, and thus viewers couldn’t vote, having a panel of 50 fans voting allowed the show to maintain the perception that everyday people are in control of the competition.

America’s Got Talent: The Champions season 2 acts and spoilers

The semi-final round is being filmed tonight, Oct. 15, final performances will be filmed Friday, Oct. 18, and the results will be taped Monday, Oct. 21.

The actual acts who are competing have been posted to Reddit (Round 1, Round 2, Round 3, Round 4), and someone combined that data, adding information about the four acts that moved on, and posted it to this spoiler-filled Reddit thread.

People with knowledge of the production told me that, last year, America’s Got Talent: The Champions had some difficulty casting acts because CBS’ The World’s Best was also casting for international acts at the same time.

In other words, the two shows were essentially in competition to get the same talent, and some Got Talent franchise acts ended up on World’s Best.

But CBS has yet to renew its show, and letting it fade away is probably the best possible outcome, considering how terrible The World’s Best was.