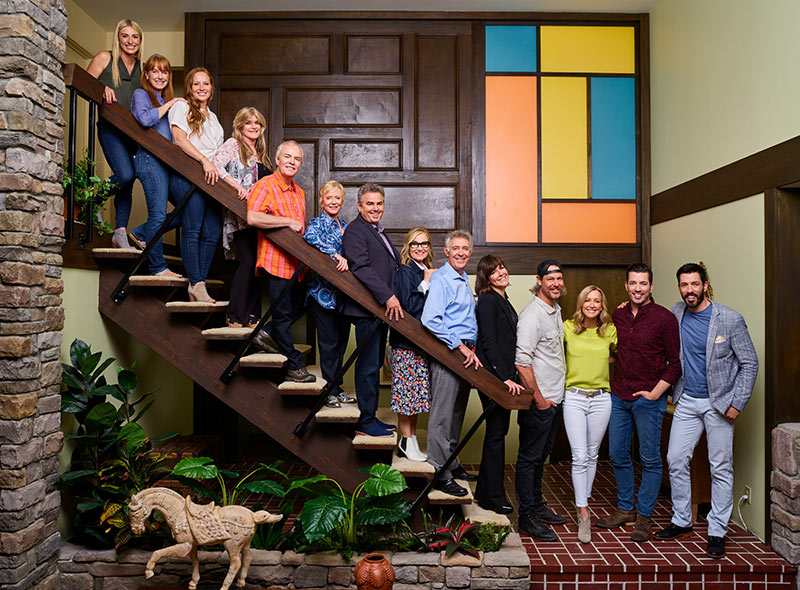 The cast of A Very Brady Renovation, including the Brady Bunch kids and HGTV stars (Photo by HGTV)

In the fourth and final episode of A Very Brady Renovation, Florence Henderson’s daughter, Barbara Chase, toured the Los Angeles house that’d once been used for exterior shots of the show, and now had been renovated to match the interior sets that once existed only on soundstages.

“It’s just such a strange experience,” she said, to “go back in time and have something that kind of wasn’t real be real.” Watching that happen on HGTV has also been a strange experience, as HGTV stars—assisted, lightly, by the actors who played the Brady kids—arrived and aimed a leaf blower at the fog of nostalgia.

What was a fake space, without walls or ceilings, became real and tangible and livable almost instantly, populated by the same people and even some of the same objects.

This is the fever dream of nostalgia: to return to a place and time in an attempt to feel the exact same feelings. Backwards is easier than forwards, because backwards has certainty, and forward is into the unknown.

This is also impossible. As much as I’d love to fold myself back into childhood Christmas mornings, or feel the breeze on my face again from a particularly charmed day of vacation this summer, it’s never going to happen. I can go back to the same place, but it’ll be different because I’m different; I can’t re-experience something with fresh eyes.

As much as I’d like another season of The Mole with Anderson Cooper, it will not be the same as it was in 2001.

Yet A Very Brady Renovation did a very good job at this impossible task.

It reunited Barry Williams (Greg), Maureen McCormick (Marcia), Christopher Knight (Peter), Eve Plumb (Jan), Susan Olsen (Cindy), Mike Lookinland (Bobby) on television, and even better, in a house that quickly transformed into the one we remembered from The Brady Bunch.

They’re different now, of course, the actors who spent five years, from 1969 to 1974, on those sets and on television. But there were constant reminders of the original: flashbacks to scenes and images from the sitcom, sometimes contrasted with the adults recreating key moments.

Seeing the adult kids in an identical family room, or back in the kitchen with that avocado green refrigerator (thanks to an HGTV viewer who had the exact same refrigerator that the show used), effectively collapsed the distance between the past and the present.

HGTV tries to extend its success

The series began when Lance Bass—the ‘NSync member and former partner to Amazing Race 4 winner Reichen Lehmkuhl who almost went into space on a Russian rocket for a reality show—was outbid by HGTV.

Both, it turned out, had the same goal: preserving this piece of television history, which sits on the Los Angeles River not far from Universal Studios.

HGTV did that, and helped itself. The network announced today that the four-episode show “has become the highest-rated series in network history,” in live+3 ratings (which include those who’ve watched within three days of an episode’s premiere). That’s true for people 25 to 54, people over two years old, women ages 25 to 54, men ages 25 to 54, and households.

HGTV also declared that the show has “more than 28 million total viewers,” though the network doesn’t explain how it did that math.

It seems that HGTV is already nostalgic for those four episodes. Their success led the network to tack on two unexpected new episodes, which premiered last night and next Monday, and have a subtitled name: A Very Brady Renovation: Behind the Build.

These episodes were constructed “from more than 9,000 hours of renovation footage that HGTV captured” and include “never-before-seen renovated spaces in the Brady Bunch house, the do-it-yourself projects used to create specific items from the world-famous TV home, and extended room reveal scenes with the Brady Bunch cast,” HGTV says.

The addition of two new episodes suggests a desire to bleed the show’s success dry, which makes sense. Consider, though, that “9,000 hours of renovation footage” weren’t interesting enough to include in the original series. Maybe it just wasn’t great to begin with; after all, watching someone paint a wall for hours is not going to make good television.

Or maybe many of those hours weren’t Brady-focused enough. Most of the time on the finished show was spent with the adults who played the Brady kids, in before and after scenes.

Sometimes they’d help a little, but the actual episodes moved quickly, often moving through six months worth of work in a few minutes of TV time. A Very Brady Renovation fast-forwarded, quite literally, past all of the actual work. A 2,000-square-foot addition just appeared from nowhere on time-lapse footage.

Of course the bulk of home renovation and design work gets skipped on television shows. There’s only so much time, after all. And of course a show that was so nostalgic would focus on the actors who played beloved characters.

Those HGTV shows thrive on personalities, absolutely, but they also do actual work. They tear things out, rebuild, and layer it with design. A Very Brady Renovation leapfrogged past that, often deferring it to some ADR voice-overs.

Perhaps, then, it was more like House Hunters and its spin-offs, which have neither stars nor renovation, just a phony premise and badly staged scenes that viewers tolerate because they want to look at cool houses. Was the interest in just seeing the Brady house again?

When the show premiered, it had 3.36 million viewers who watched that first night, but its final episode had just 1.65 million viewers. These are overnight ratings, so of course, more people watched on DVRs and on demand in the following days.

But for live viewing to drop in half from the first to the last episode suggests many people were curious and then fell away. Were they the nostalgia-seekers who dipped in and left? Or the HGTV fans who wanted more process but weren’t really getting much of it?

Will this now become a thing, finding TV houses and renovating them to look like the show’s sets?

If so, I vote for The Golden Girls house next, especially because its sets had a physically impossible floor plan, with the kitchen, garage, and bedrooms occupying the same physical space. And none of that matched the exterior of the house, so I’d like to see them try to make all that work.

A Very Brady Renovation did work: in four quick, fun episodes, it accomplished its task of preserving the house while turning what “wasn’t real” into a reality, and momentarily bridging the past and present. We don’t need to resurrect this show to celebrate what it gave us.