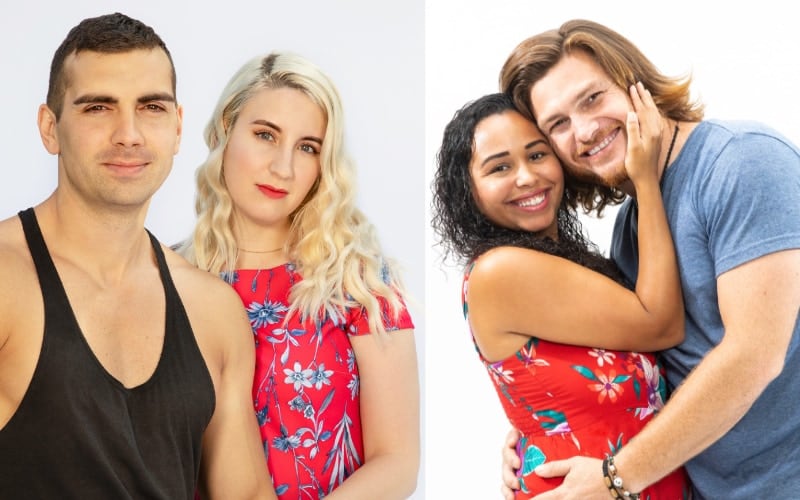 Now the original is returning to TLC with seven brand-new couples whose love spans continents and are trying to navigate their relationships and immigration laws. Watch its cold open, which previews the season, and read about the cast below.

That’s one year after season six premiered. When season six ended in late January, TLC said that it’d been the highest-rated season among women 18 to 34, and was the top cable program on Sundays in the same demographic.

Back then, TLC president and GM Howard Lee said “the tried and true original 90 Day Fiance is captivating more viewers than ever” and added, “we’re just getting started” with “giving our viewers a rollercoaster of emotions.”

Here are the seven new couples who will make up the central cast of 90 Day Fiance season 7, along with their bios from TLC:

“Tania was headed to South Africa to meet up with a man she had met on a dating app, but when that connection didn’t work out she decided to still make the most of her trip. She struck up a flirty conversation with a bartender named Syngin, went home with him that night and ended up staying in South Africa for four and a half months. Now they’re taking their big adventure to her home in Connecticut, but their instant connection may have caused them to overlook major differences between them; Syngin is excited to go to America for the first time and imagines a land of opportunities, but he and Tania will be living out of a shed in her mother’s house and will be expected to follow her rules. In addition, Tania and Syngin are not always on the same page when it comes to mapping out their future together.”

“Robert and Anny met on social media, and after talking every day for six months Robert booked a cruise with a stopover in the Dominican Republic to meet Anny in person. Robert was smitten and proposed that very first day – after only spending 8 hours together, and he then applied for the K1 Visa. Robert is doing everything he can to bring Anny to the U.S. and make her happy, but with a full-time job and a four-year-old son to take care of, he hasn’t been able to take another trip out to see her or buy her an engagement ring.”

“Michael’s friends are jet setters who have lavish parties all over the world. During a yacht party in Croatia, Michael met an international model named Juliana and there was an instant attraction. They fell deeply in love and applied for Juliana’s tourist visa to come to America for the first time, but when the visa was denied they were crushed. Shortly after, Michael realized he wanted to be with Juliana not just for a few months but forever, so he proposed to Juliana and quickly filed for the K1 Visa. While the time they have spent together has been fun and exciting, Juliana has only seen pieces of Michael’s life, but not the full scope of his responsibilities, including two kids with his ex-wife. Michael thinks bringing Juliana to the U.S. will be big a reality check—she will have to leave her jet setting lifestyle behind her, coordinate responsibilities with his ex-wife and understand that Michael’s financial support isn’t limitless. Given the 20-year age difference, Michael’s ex-wife and family have concerns about whether Juliana is with Michael for the right reasons or if she just wants a ticket to America.”

“After graduating college, Emily moved to Russia to teach English and had planned on traveling all over Europe during her time there. During a visit to the gym with her co-workers Emily spotted Sasha, an attractive fitness trainer. He trained her at the gym, she tutored him in English and, the romance ensued. Before long, Emily learned that Sasha was twice divorced and has a son from each marriage. Soon after, Emily became pregnant with Sasha’s third child, and they’re now planning on moving to America as a family of three however, the tricky part will be convincing her family that she’s not going to become ex-wife number three.”

“When Blake first saw Jasmin’s profile he thought she was too beautiful to be true, but they started to get to know each other and eventually took their relationship offline. Blake flew to meet Jasmin in Finland for the first time and it went so well they decided to make it official. By his second trip he knew she was the one and decided to propose, but Blake’s family and friends worry that Jasmin may be in it for more than just love. Her sister won the green card lottery and is already in Los Angeles, leading to questions of whether Jasmin is just looking for a ticket to join her sister in the land of opportunity?”

“As a full-time mom of three, Anna never thought she would find love again, and not on social media of all places. Mursel sent her a friend request after noticing their shared passion for beekeeping. Despite the language barrier, they began talking, often sending each other photos of their bees. Anna finally took the plunge and traveled to Turkey to meet Mursel, and four months later he proposed to her on social media. Despite such a strong connection, there is a big secret in their relationship: Mursel’s family doesn’t know that Anna has three kids, as they don’t approve of having children out of wedlock.”

“Mike’s friend Matt has always been a huge influence in his life, so when Matt married a woman from Ukraine, Mike wondered if he too should be looking further for love. Matt and his wife Svetlana decided to play matchmaker and introduce Mike to Svetlana’s best friend in Ukraine, Natalie. Matt raved about Natalie to Mike and it wasn’t long before the two were talking online. Mike flew to Ukraine to meet her in person, and by the end of his trip he knew Natalie should be his future wife. On their second meeting in Paris, Mike proposed at the Eiffel Tower. He hopes that the big differences between them don’t get in the way: she’s a city girl and he lives a more rustic life and she hopes that he’ll go to church with her but he has no interest.”