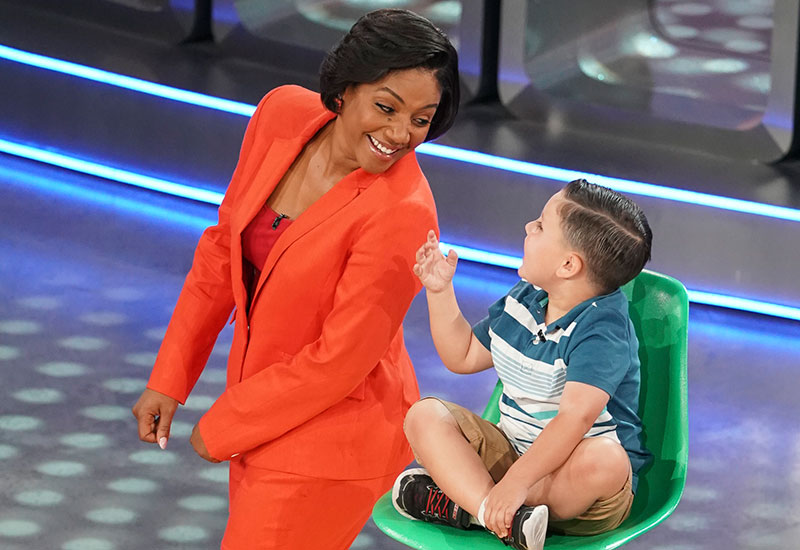 Tiffany Haddish, who's hosting the revival of Kids Say the Darndest Things, with Matthew (Photo by Eric McCandless/ABC)

Good Monday morning! It’s the last day of September, because this year is evaporating faster than a ghost on paranormal reality show once the camera is pointed at it.

Yes, it’s beginning to look a lot like Halloween, and quite a few of the more than two dozen reality shows that premiere this week—plus a bunch of documentaries and specials—have Halloween or ghost themes. But many do not! (By the way, if you’d like to get this preview in your inbox, before it’s published here, add your e-mail address here.)

Let’s start with a special, which I don’t think I need to describe because its title, The Toilet Paper Wedding Dress Challenge (TLC, Monday, Sept. 30, at 10), does all the work. That said, it did make me imagine people wearing elementary school mummy costumes as wedding gowns. But the opposite is true: just watch the trailer for this special, which Trading Spaces host Paige Davis hosts.

In each episode of Bravo’s new social experiment reality show In a Man’s World (Bravo, Tuesdays at 10), a woman who’s struggled with sexism in her professional life will live as a man (thanks to make-up effects) to see what life is like for men. I’ll have a full review Tuesday.

The daily lives of eight families with undocumented members facing deportation are the subjects of a new documentary series, Living Undocumented (Netflix, Wednesday), which I’ll also review this week.

For some lighter television, the classic series Kids Say the Darndest Things is back (ABC, Sundays at 8) with new host Tiffany Haddish, who interacts with kids, who say funny things. Here’s the trailer for the revival:

After last week’s premiere of three Halloween baking competitions, there are more one on their way: Freakshow Cakes (Cooking Channel, Fridays at 11), in which bakers compete to create “the freakiest cakes imaginable,” and Haunted Gingerbread Showdown (Food Network, Sundays at 10), which is hosted by Clinton Kelly.

And if you want a cooking competition without Halloween theming, there’s Chopped: Sweets Showdown (Food Network, Tuesdays at 9), which is the show’s first-ever dessert-only tournament.

By the way, if you’ve not yet read the story of how Chopped became a reality show, which includes details about its truly crazy pilot, don’t miss this!

Back to Halloween/ghosts: Haunted Salem: Live (Travel Channel, Friday, Oct. 4, at 8) is a four-hour long live investigation of three allegedly haunted places in Salem, Massachusetts. It’s starring 10 of Travel’s “paranormal experts,” because Travel Channel is all about ghosts now.

A filmmaker visits Cuba, Peru, Jamaica, New Jersey, Florida, and other places to meet with locals and learn about them and where they live on Chasing the Sun (Ovation, Thursdays at 7). That’s season one, while the show’s second season is premiering on Wednesday, but only on Ovation’s streaming service JOURNY.

Discovery has a new show about homesteaders, though this time, it’s people who live off the grid but in community to help each other survive harsh winters. The show is called River of No Return (Discovery, Sundays at 9).

On Relentless with Kate Snow (Oxygen, Fridays at 8), the journalist tells the stories of people who “tirelessly pursue justice for their loved ones,” according to the network.

Dr. Oakley, Yukon Vet premiered its new season on Saturday (NatGeo WILD, Saturdays at 9), with the veterinarian helping animals in remote areas of Canada and Alaska.

Also this week, new seasons of these shows will premiere:

E! True Hollywood Story returns for a new season (E!, Sundays at 10), with “NXIVM: Self Help or Sex Cult?” Other episodes this season include “Who is Kim Kardashian West?” (you’d think E! viewers would know!), “Does Hip-Hop Reject Women?”, and “Horror Movies: Cursed or Coincidence?”

The Silence of Others (PBS, Monday, Sept. 30, at 10) follows eight people over six years “fight a state-imposed amnesia of crimes against humanity, where the emotional court battle uncovers a country still divided over its fascist history,” according to POV, which is airing this Oscar-shortlisted documentary.

The season finale of Latino Public Broadcasting’s VOCES is Porvenir, Texas (PBS, Friday, Oct. 4, check local listings) which is described as “an investigation into the tragic 1918 murder of 15 Mexican men in the tiny Texas border town of Porvenir.”

Finally for this week, “one of the best sports documentaries of all-time” airs tonight, at least according to one of its producers, Bill Simmons. He tweeted that about Diego Maradona (ESPN, Tuesday, Oct. 1, at 9), which ESPN says focuses on “one of the most celebrated and controversial footballers in the world,” and covers “the miracles he performed on the field as darker days loomed ahead.”