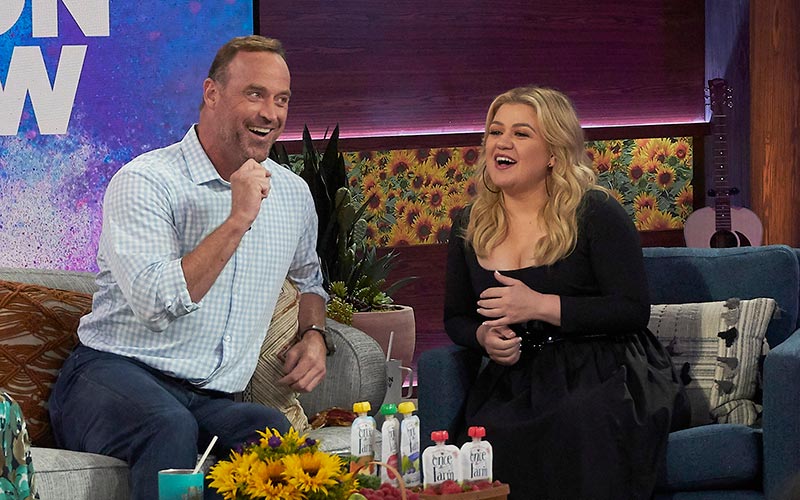 American Ninja Warrior host Matt Iseman, who will also be hosting Live Rescue, with Kelly Clarkson on the first week of her new syndicated talk show. (Photo by Adam Torgerson/NBCUniversal)

Good Monday morning! We’re still a week away from fall TV premiere week, but there are plenty of fall reality shows premiering this week, starting with one fading competition that is returning, and also the return of a popular cable show.

Plus, the host of one popular summer reality series jumps to take over hosting duties on a new cable reality series. All of that and more is in this weekly preview of reality TV.

Dancing with the Stars returns after taking the spring season off, and it has a controversial new cast (ABC, Mondays at 8). Or maybe it just has a controversial cast member: Donald Trump’s former press secretary, Sean Spicer. I wrote about the casting of Sean Spicer—and the response from DWTS host Tom Bergeron and Queer Eye’s Karamo Brown—in this Washington Post op-ed.

Who that will be is the real question, since there were more than 20 people who finished stage 2 of the four-stage final course.

Also concluding this week: Bring the Funny (NBC, Tuesday at 10), wthich lived up to its title sometimes.

Surviving R. Kelly has been renewed by Lifetime. And now, season one—which aired earlier this year and led to R. Kelly being arrested and charged with aggravated criminal sexual abuse—is streaming on Netflix.

Inside Bill’s Brain: Decoding Bill Gates (Netflix, Friday) tells the story of Microsoft founder Bill Gates in a three-part documentary series directed by Davis Guggenheim, who had “unprecedented access to Gates as he pursues unique solutions to some of the world’s most complex problems with the same level of optimism, curiosity, and fervor that inspired his original vision for Microsoft,” according to Netflix.

A&E’s popular Live PD is back for a new season of ethically dubious live broadcast of police officers’ work (A&E, Fridays at 9).

Its newer, spin-off show Live Rescue, which follows first responders, also returns (A&E, Saturdays at 9), but with a new host: American Ninja Warrior’s Matt Iseman, who once went to medical school before leaving to pursue comedy and eventually become a TV personality.

The Circus returns for a new season, with John Heilemann, Alex Wagner, and Mark McKinnon following the Democratic candidates for president and whatever other political news happens during the week (Showtime, Sundays at 8).

Return to Nome, Alaska, for gold mining drama on Bering Sea Gold (Discovery, Tuesdays at 9), or follow celebrities who take their kid or parents on some kind of adventure. The Parent Trip (BYUtv, Thursdays at 9 ET/6 PT).

If you’re into college football—or not!—ESPN has two new documentary series focused on it: The American Game (ESPN, Tuesdays at 9), which says it will be “exploring themes that have made the sport an integral component of the American landscape,” and The Greatest (ESPN, Thursdays at 9) which looks back at “the personalities that have defined college football’s remarkable history.”

Hunt for Eagle 56 (Smithsonian Channel, Sunday, Sept. 22, at 9) follows a team of diverse who searched for and discovered the USS Eagle 56, finding evidence that it was sunk by a German submarine during World War II.

Violinist Scott Yoo travels the world to look at the stories behind music on Great Performances: Now Hear This (PBS, Fridays at 9).

Update: The Deed: Chicago and Five Day Biz Fix were originally listed above, as they were announced as returning this month, but CNBC has pulled both shows from the schedule, with no future premiere date announced yet.