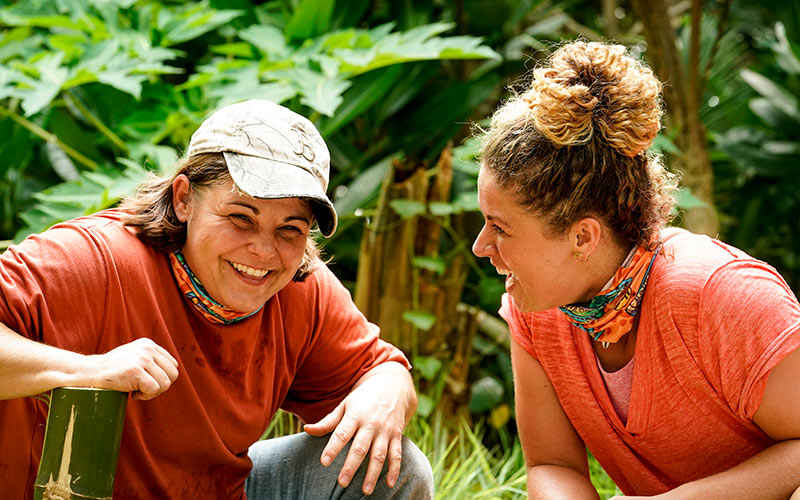 The cast of Survivor Island of the Idols cast came to play—or at least to form alliances, point fingers at each other, and ostracize people at the first possible opportunity. It made for a lively first episode with lots of dynamics and groups forming in front of our eyes.

Also, “Boston” Rob Mariano and Sandra Diaz-Twine were there, a twist proven to be completely unnecessary as the episode unfolded and this cast illustrated that they did not need to be assisted in bringing the strategy, drama, or entertainment.

I’m still learning the new cast members’ names, and also their tribe divisions; the 90-minute premiere (it’s really the perfect length) had a lot of time to introduce us to many of the contestants, but I would fail a quiz right now about who is on what tribe, and even what some of their names are.

I loved that Janet immediately decided to challenge “the stigma of the older woman,” though when she said, “I need to stand out to break that stereotype,” I worried that she’d do so by repeating a pattern we see so often: trying to control the group and be a leader.

Instead, she just went into bad-ass mode and made fire—and then gave credit to two other people after it was burning. Well-played, Janet.

On the other tribe, Elaine was a stand-out, in good and not-so-great ways. First, she formed a quick alliance with Vince and Tom, and because they were gone together (chopping down trees), the other seven decided to form an alliance agains them. “Those three immediately painted a target on their back,” Aaron said. Yes, target the people doing the work!

But Elaine was also just charming and fun to watch, calling cumin—yes, the spice—”some city shit.”

Her likability prompted poker player Ronnie to insist that she “sounds like a clear winner to me” and “if she’s at final Tribal Council,” she’d win. I can understand the argument, but isn’t day one or two a little premature to be making that case? So many of these reactions felt, well, reactionary.

Elaine was, it seemed, going to be targeted, and seemed both devastated and resigned to her fate, which was disappointing—I wanted her to fight for herself. But then, surprise, Ronnie went home instead, and Elaine got zero votes.

Jeff Probst called it a “devastating blindside.” For Ronnie, maybe. For everyone else? An awesome blindside, and a welcome change from the usual pattern at the start of the season, where men who appear to have some physical strength are often granted automatic immunity.

The only person outside of that vote was Aaron. So was Elaine’s emotion (“When you finally get to do something that you’ve been thinking about for so long, it’s heartbreaking that you can’t fulfill what you had set in your heart”) at Tribal Council designed to deflect from the real plan? Wow wow wow.

The two tribes seemed pretty evenly matched in their first immunity/reward challenge, though Vokai/purple pulled ahead and won easily over Lairo/orange at the puzzle stage.

At the Vokai tribe, there was considerable time spent on Dan, and how some of his tribemates were responding to his unwanted touches.

Kellee started by telling us, “I’m a germaphobe when it comes to other people’s grossness,” and then said Dan “makes me feel a little uncomfortable.” “Dan, I don’t want your head on my leg,” she said. We saw her ask him, “Are you sweating on my leg?” and later, he asked her, “Do you want a back rub?” and she said no.

Kellee wasn’t alone here. Molly told us “Dan does not know personal space.” She expressed concern about bringing this up: “I don’t want to cause any problems at camp.” That moment illustrated nicely how hard it can be for those on the receiving end of unwanted touching or other behavior to advocate for themselves, especially if they fear consequences (here, in a game for $1 million).

Eventually, Kellee did talk to Dan about it, starting by talking about love languages, and saying, “I’m not trying to reject that.” Of course, she was, and she should not only be free to reject any contact, nor should she have to be on the defensive. Are there no rules about that kind of behavior, regardless of its intent?

My sense is that Dan’s behavior is going to come back in the future, considering how much time was spent on it.

Speaking of other things that were given a lot of time: There will be no title sequence or theme song this season, again, tragically. There was also no marooning or Jeff Probst pretending to not know people’s names—and you know what? That worked very well. At the very least, it’s a change from the familiar.

But there were two other people that got time and attention. So let’s talk about Rob and Sandra.

Meanwhile, on the Island of the Idols

In honor of the premier and this season’s twist, I’m introducing a new feature: the Rob and Sandra Meter, a name I may change.

My methodology: I started and stopped a timer every time Sandra and/or Rob were on screen, or when they were the focus of someone’s confessional or discussion. This is imperfect and undoubtedly imprecise, but will give us a close approximation of their screen time. For the total episode time, I used the length of the episode on CBS.com, which does not include commercials.

Rob and Sandra have been on Survivor: Island of the Idols for 11 minutes and 48 seconds of 63 minutes and 41 seconds total running time, a total of 18.5 percent of the episode.

Their nearly 12 minutes of screen time includes the two minutes at the beginning of the episode. Of course, a significant amount of that time was spent with Elizabeth, the first person to visit the Island of the Idols, which arguably could be character development for a new cast member, instead of focus on the two returnees.

Part of their time came from their surprise appearance at Tribal Council, where they were hidden from view but could see and hear what was happening.

Having someone hidden at Tribal was Jimmy Fallon’s idea, by the way, so Jeff Probst calls it “the secret Jimmy Fallon viewing booth — the Fallon Booth.” (For fuck’s sake.) Also the entire Tribal Council set was built around this idea, though I think they should have just gone with a treehouse balcony, because then it would have brought this idea right back to its origin:

For me, the editing cut to them too many times, and their reactions just don’t matter, unless they’re going to leak information to the other tribe, which would be a whole new thing. It felt entirely unnecessary, though I did love the moment when Rob—dismissively responding to the emotions of the players—asked Sandra, “Was it this hard for you?” and Sandra said, “Fuck no.”

Elizabeth was sent to the Island of the Idols to meet Rob and Sandra based on a random draw, which I really liked as a method. It removes the possibility of implicit bias from other players having to make a snap decision.

At the end of her visit, Elizabeth drew the name of the next person to go to the Island of the Idols, though that was concealed from her and us, which I did not like. Even if this is all completely above-board, it just looks like an opportunity for manipulation.

When she first arrived, Elizabeth was greeted by Rob and his cliches and Sandra, and then Rob read her information about their role in a way that a second-grade teacher would read rules for a visit to the bathroom.

When Rob said that he and Sandra have each won and lost, the editors chose to show a clip of Rob winning (he won once, and lost three times) and a clip of Sandra losing (she lost once and won twice). There’s Survivor’s sexism, back for another season.

Eventually, Rob offered a lesson: “I can teach you how to make fire.” Watching him show her, I thought: Doesn’t everyone who’s ever watched this show know the basics by now? The opportunity to practice, with feedback, is great; the lesson, eh.

Elizabeth practiced with Sandra, and then Rob challenged her to a duel. She could either decline and go back to camp (and be part of the strategizing for that night’s Tribal Council vote) or face off against Rob in a fire-making challenge, for which she could win immunity good for just two Tribal Councils, or lose her vote for that evening’s Tribal.

When Rob said she could just go back to camp, I yelled at my TV: TAKE THAT. I do not understand why anyone would agree to that, especially considering how poorly she did practicing fire-making with Sandra.

I also do not understand why Elizabeth went back to camp and lied about the Island of the Idols. Rob told Elizabeth she should “always trust your gut. You should’ve never battled me in this.” That was an interesting takeaway, and she used that as rationale to lie—but I think her lie represented the same problem: She was not thinking of the big picture.

Someone else is going there in the next day or two. You will eventually be exposed! What is the advantage? If she worried people thought she had an advantage, that’s still a problem with Ghost Island version she told everyone.

I was, however, wildly entertained by people trying to get her vote, a vote that she didn’t have.

Altogether, Island of the Idols was considerably better than Ghost Island, and managed to mostly exist in a vacuum that allowed the rest of the cast to be introduced and shine on their own. And from what we’ve seen so far, this is a stellar cast, and I’m excited to see how they play.