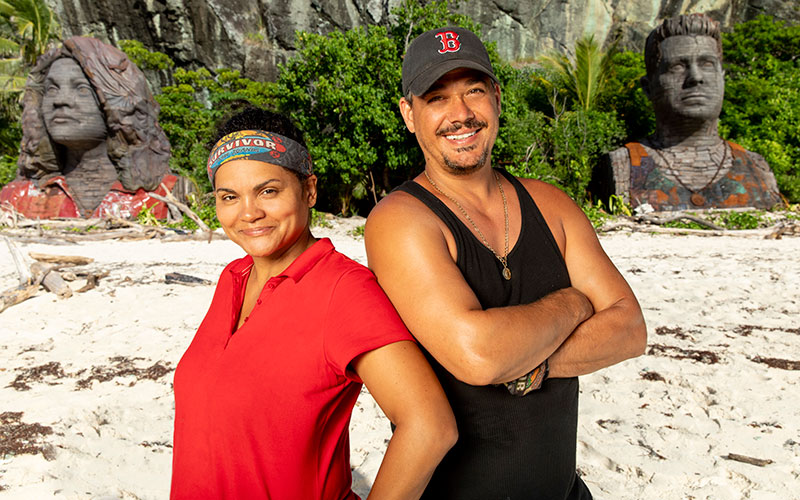 Sandra Diaz-Twine and "Boston" Rob Mariano and the Island of the Idols giant heads on that are supposed to look like them. (Photo by Robert Voets/CBS Entertainment)

We already knew that twist will involve previous winners “Boston” Rob Mariano and Sandra Diaz-Twine, who won’t compete in the actual game (they will next season, Survivor 40, along with 18 other Survivor winners).

They’ll be mentors, besides serving as the alleged models for giant head sculptures on the island. (Seriously: Does that look anything like Rob? The Sandra one vaguely resembles her. But his? I can’t see it.) They’ll also sometimes compete in mini-challenges against the actual players.

First, Ghost Island was not necessarily a bad twist, but it was most definitely a giant waste of an opportunity from start to finish, with only some visitors even getting the opportunity to do something, and when they did, all they got to play were just dumb games of chance. This season, CBS says:

“…some castaways will have the opportunity to visit the Island of the Idols to learn skills and strategy from these ‘idols.’ Each player, selected to visit the special island in various ways throughout the season, will have to decide if they should put their knowledge to the test for a chance at a possible advantage in the game, or risk losing something very important in the process. Those who can rise up to the challenge will possibly gain an advantage and continue their individual quest for $1 million and the title of Sole Survivor.”

The difference between this and Ghost Island is that Rob and Sandra will play a critical role. In a press release, Probst explains that the Island of the Idols will be “a Survivor boot camp where each week, players will be instructed on a different facet of the game and then have a chance to test what they’ve learned for a shot at an advantage. He explains more in the preview below:

“…Rob and Sandra will literally going to walk down, and their minds are going to be blown. And their [Rob & Sandra’s] job is to teach new players various aspects of the game and then test them to see what they’ve learned for that player to earn an advantage.”

The first lesson and test: fire-making. “After the person makes a fire, they’ll then say, ‘How confident are you? Because you’re willing to take Rob on in fire, you have a chance of winning an advantage. If you beat me, you can go back to camp with an idol, good for the next Tribal. If you lose, you lose your vote,'” Probst told Parade’s Mike Bloom.

Those advantages and consequences can actually be negotiated by Rob and Sandra. For example, Bloom reports, “they can make the idol prize good for two Tribal Councils instead of just one, or give them a two-minute head start ahead of Rob.”

On top of that, Probst said, Rob and Sandra “want to remain a secret; they have more power when people are surprised. But it’s up to them to convince a player not to tell anyone.” And executive producer Matt Van Wagenen explained that some tests will be competitions, others will be commands (like to perform a certain role in a reward or immunity challenge), and “other times, people will not even realize that the test has begun. It’s like boiling a frog slowly.”

All of this starts to sound very insufferable, depending upon how much time is actually spent on it, and how much the players start deferring to Rob and Sandra instead of just playing actual Survivor.

In the video preview (watch at the end of this story), Sandra says that their goal is much bigger than teaching a skill: “That’s what we’re here to do: help them hopefully to make it to day 39 and be winners like me and Rob.”

Besides the presence of two former winners/mentors/giant heads, there’s a new start to the season: the marooning won’t involve Jeff Probst. Instead, the tribes will just show up at their beaches, and see the season’s title on their tribe’s sign, having to guess what that means.

Why do that? Because Jeff Probst wants them to think there are lots of hidden idols. “We’re hoping that they think hidden immunity idols are in play in a big way. We’re thinking they think it has to do with these tangible advantages in the game,” he told Parade.

In the preview below, which introduces some of the cast members, Probst says this is “the most powerful group of women we’ve ever had,” and that’s remarkable coming from the person who once said half of a season’s female players had no chance of winning.

Here are all 20 players, from CBS’ list, along with their ages, occupations, cities of origin, and where they live now.