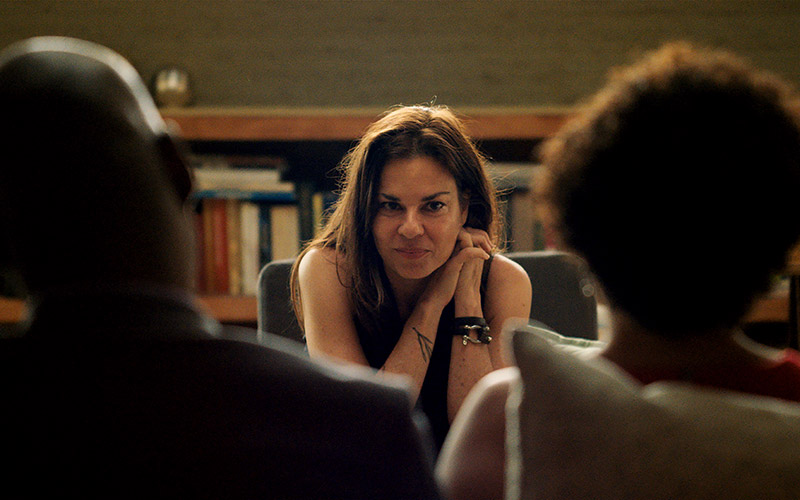 When therapy makes an appearance on reality television shows, it’s often with a cast member or two sitting down with a therapist, talking, maybe crying, maybe actually receiving some insight. It’s mostly used as an exposition dump, as a way to make the interior exterior so that producers can have something to film.

It also sometimes appears as a complete shitshow, like Marriage Boot Camp, where therapy or therapists are used to give some kind of reality TV nonsense extra credibility.

There have been more respectable shows, including Hoarders, where professionals are on-camera, though their treatment of someone’s mental health is not the actual focus. Those professionals mostly function as supportive guard rails, since it’s impossible to offer treatment in the two days it takes to try to clean up someone’s hoarded home. (Hoarders does offer money for participants to receive therapy afterwards, off-camera.)

Real talk therapy—the actual process of sitting and engaging with a therapist—is more often a part of fiction than nonfiction, like HBO’s The Sopranos or In Treatment. The latter series starred Gabriel Byrne as a therapist, and aired one episode every weeknight, each showing the therapist’s conversation with a different patient. On Fridays, Dr. Paul Weston visited his own therapist, played by Dianne Wiest.

It was extraordinary television. While it was very little other than two people talking for a half-hour, the writing, acting, and directing worked together to make both the patient and the therapists’ perspectives understandable: five nights a week of empathy, even for characters who had none for themselves. (In Treatment is on Amazon Prime and HBO Go if you missed it.)

Showtime’s new Couples Therapy (Fridays at 10) is the reality television version of In Treatment—I would not be surprised if that was the actual pitch—and is worthy of its scripted predecessor for both its insight and its artistry.

Instead of seeing one patient per half-hour episode, four couples’ hour-long therapy sessions are compacted into a single episode—which also includes the therapist’s time with her own therapist.

The episodes are short, just over 25 minutes, yet they feel substantial: even though it’s just three people sitting and talking, it’s tête-à-tête television, but with a moderator who helps each partner verbalize and acknowledge the pain and problems in their relationships.

Dr. Orna Guralnik, who’s an accomplished couples therapist and is not just playing one on television, asks questions and guides the couples—Annie and Mau, Elaine and DeSean, Sarah and Lauren, and Evelyn and Alan—to hear each other and themselves.

She’s sometimes surprisingly direct, and her lean forward felt a touch aggressive at first. But she is also exceptionally effective at holding up a verbal mirror—and also at acknowledging her own power and responsibility, which comes both in the moment and during her own therapy sessions.

The range in the couples’ relationships, backgrounds, and life experiences makes them each interesting to watch and very different from one another, yet there are also patterns and similarities that emerge quickly. Though their personalities range from taciturn to prickly, they verbalize enough for us to understand what they’ve been experiencing in their relationship, and what they think about it.

Their disclosures, and our reception of them, are assisted by an inescapable fact: they’re in therapy, but they’re also on a reality TV show.

Couples Therapy’s biggest mistake is its title, which is identical to a 2012 to 2015 VH1 series. The VH1 version—which eventually modified its title to be VH1 Couples Therapy with Dr. Jenn—wasn’t quite the feces firehose that is Marriage Boot Camp, but was close enough, a vehicle for D-list reality stars to extend their 15 minutes. VH1 said it existed to “shed light on the complicated and often misunderstood world of high-profile relationships.” It did not.

Showtime’s press materials for the series scoffs at the “reality-show caricatures” and insists this is “true documentary filmmaking,” and it certainly is devoid of the nonsense that clutters reality show screens: screaming and fighting, sound effects, phony reaction shots, frankenbiting.

Couples Therapy, though, has real, human conflict, and also plenty of the artifice that is required to produce an unscripted show.

The couples were cast, and know they’re being filmed. The office is a set, constructed by a crew that includes a production designer, an art director, and a set decorator. The credits list many craftspeople, from camera operators to editors, led by executive producers Josh Kriegman, Elyse Steinberg, and Eli Despres from Edgeline Films.

The office is a set, constructed by a crew that includes a production designer, an art director, and a set decorator. The credits list many craftspeople, from camera operators to editors, led by executive producers Josh Kriegman, Elyse Steinberg, and Eli Despres from Edgeline Films.

But the artifice is well-done and thoughtful, and always places a couple’s mediated dynamic at its center.

I actually spent much of the first episode trying to figure out where the cameras were, until I realized how they were cleverly concealed behind angled mirrors built into the furnishings of the office.

Executive producer Josh Kriegman told The Guardian that the set was designed for the patients to be able “to come in, sit in the waiting room, have an hour-long therapy session, leave and never once interact with any element of production or camera-person, or see any camera.”

The effect of that choice is clear. Even though they know they’re being filmed, even though they were cast, the couples come across as comfortable and at ease with disclosing very intimate details of their lives, and don’t need to perform that disclosure.

The editing assists here, I’m sure, fast-forwarding to the interesting parts, to the moments of insight, and skipping much of the work required to get there. Again, the couples had hourly sessions with Dr. Guralnik, and all four couples’ sessions, plus B-roll, plus Dr. Guralnik’s time with her therapist, fit into about 25 minutes of television time.

So Couples Therapy is not a facsimile of therapy, allowing us to glimpse only the most-interesting parts, not the complete process. Yet production is required to make television; hour-long episodes with one couple would surely drag. (I sometimes feel bad that my therapist has to listen to me for that long, which strikes me as something I should talk about in therapy.)

Why would anyone volunteer to be so confessional, disclosing the kinds of details about relationships that sometimes even close friends don’t know? Kriegman told The Guardian that the 1,000 couples who applied were “inspired by the possibility that sharing their stories publicly could be helpful to other people who are having similar struggles.”

That seems a little fanciful. Six months of free couples therapy in New York City strikes me as a more realistic incentive, as certainly not every couple can afford the time and money that therapy requires.

Therapy itself might not be adequately supported by our for-profit health care system, nor realistically portrayed in unscripted television. But disclosure of interior lives has been part of reality TV since the very first episode of The Real World, when its participants talked into a camera in the confessional booth.

Those confessions, however, haven’t been received by someone there to help; instead, it’s been received solely by a camera and producers ready to use that footage to tell whatever story they want to tell. (That’s to say nothing of the often incredibly problematic interaction with mental health professionals that occurs behind the scenes, where professionals working for the show act as another tool for producers to get what they need out of their cast.)

What Couples Therapy does—and does exceptionally well—is illustrate the work that goes into understanding ourselves and our relationships, and how useful it is to have help doing that. I know how much therapy has helped me.

While the Showtime series may inspire some visits to couples’ therapists offices, I think it will mostly help destigmatize a process that usually occurs behind closed doors, especially considering how poorly unscripted television has previously represented the work of mental health professionals in the past.