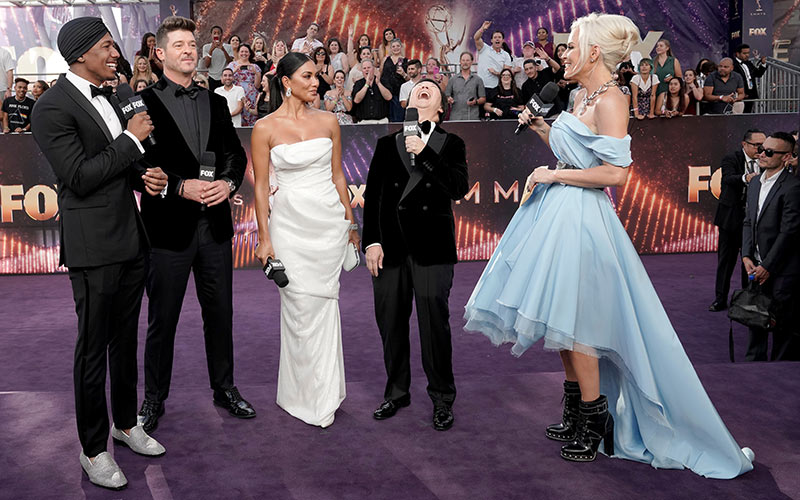 None of this is funny. Just make it stop. (Photo by Fox)

Kim Kardashian-West and Kendall Jenner were laughed at by the audience while presenting the competition reality show Emmy to RuPaul’s Drag Race, and yet their presentation was just one of several humiliations the genre suffered last night at the hands of the people producing the Emmys.

The reality TV headline from the 71st primetime Emmy awards should have be that RuPaul’s Drag Race won its second consecutive Emmy in the outstanding reality competition category, beating the same group as last year, except for new entrant Nailed It!, which replaced Project Runway in an otherwise static category.

Except it was Fox’s The Masked Singer had the biggest presence in a telecast that was uneven (if I’m being kind) or a mess (if I’m referring to what I watched).

Fox used the pre-show and the actual Emmys telecast to promote The Masked Singer, and not just in advertisements. That is completely understandable: use the platform to promote your biggest show, especially since it’s returning for its second season three nights later. (The Emmys rotate among the broadcast networks.)

But—with the exception of showing off the costumes during the pre-show—all mostly ended up doing was emphasizing the worst parts of The Masked Singer, i.e. the judges, and doing absolutely nothing for the show.

During the actual telecast, there was an extended bit with judge Ken Jeong and host Nick Cannon during which Ken Jeong created a Tik Tok video. The Emmys (and Oscars) have done lamer bits, but that added nothing, gave no one any reason to watch The Masked Singer, and wasted time in a telecast that already had abundant time thanks to its decision to not have a host.

Tim Allen introduced the accounts from Ernst & Young, three people followed onto the stage by Thingamajig. That was the joke, apparently. If you’re going to be this shameless, why not go big? Why not mock yourselves a little? Fox had no shows nominated and no corporate family to promote, now that Disney owns all of the best parts of the former Fox empire, and Empire itself is ending, so all they’re left with is The Masked Singer and Jenny McCarthy: yikes.

Jenny McCarthy was one of the hosts of the Fox red carpet pre-show, which was mercifully shorter because of a long football game, and she was as good at hosting as she was at guessing masked singers and giving medical advice.

It seemed like some kind of bit: How little can she possibly know about television and the people she’s interviewing? More than she knows about vaccines, but that’s a low bar. How uncomfortable can she make them feel? It was far more painful than a flu shot, that’s for sure. Several of the celebrities she interviewed seemed embarrassed to even be standing there, and darted away quickly.

I made this argument three years ago, but I think it stands today: It’s time to return reality TV awards to the Emmys prime-time telecast.

Imagine tonight’s show if it had the cast and producers of Queer Eye, Anthony Bourdain Parts Unknown, and Free Solo accepting their (biggest) awards. Imagine if United Shades Of America host W. Kamau Bell gave this speech during the prime-time Emmys instead of on the Creative Arts awards.

The Emmys handled reality TV poorly, but they also handled scripted TV poorly, and I’d rather there be more visibility for high-quality unscripted programming amid the mediocrity.

Presenting the reality competition Emmy were Kim Kardashian-West and Kendall Jenner. Why? Because they’re stars of Keeping Up with the Kardashians and that’s the only example of a reality show many people can think of, so let’s just let the audience and Emmy voters continue to suffer from that delusion rather than introducing them to some of the talent that doesn’t get Kardashian-level attention. Maybe one of the other Emmy winners, like the cast of Queer Eye, or W. Kamau Bell?

She was not making a joke, but the audience laughed and laughed. Kendall tried to talk over it, finishing Kim’s sentence, which was apparently incomplete: “…telling their stories unfiltered and unscripted.”

RuPaul’s presence on stage, surrounded by the producers of Drag Race, quickly erased the Kardashians. He started his acceptance speech by saying, “We are so proud of this show, and we are so happy for all the gorgeous kids who come on and show how beautiful they are.”

After thanking some of those producers and people at VH1 by name, RuPaul said:

“Thanks to the Academy for voting for us—and we love you for that.

And speaking of voting and love: Go and register to vote. Go to vote.gov—vote.gov and vote, register.

We love you; thank you so much everybody.”

Besides that, the only part of the Emmys that acknowledged unscripted TV with any reverence was the “in memoriam” segment. That’s because it included a reality TV producer and executive, Tim Sullivan, who was identified on-screen as “producer.” Sullivan died in May, at 42, of bile duct cancer.

Last year, he co-founded a new production company, Gang of Wolves, with veteran showrunner Anthony Carbone, and he previously worked in unscripted at Fullscreen, Zodiak USA, Goodbye Pictures, and Magical Elves. Sullivan is survived by a child and his wife, Claire O’Donohoe, a Fox unscripted executive. RealScreen’s obituary includes remembrances from his colleagues and friends.