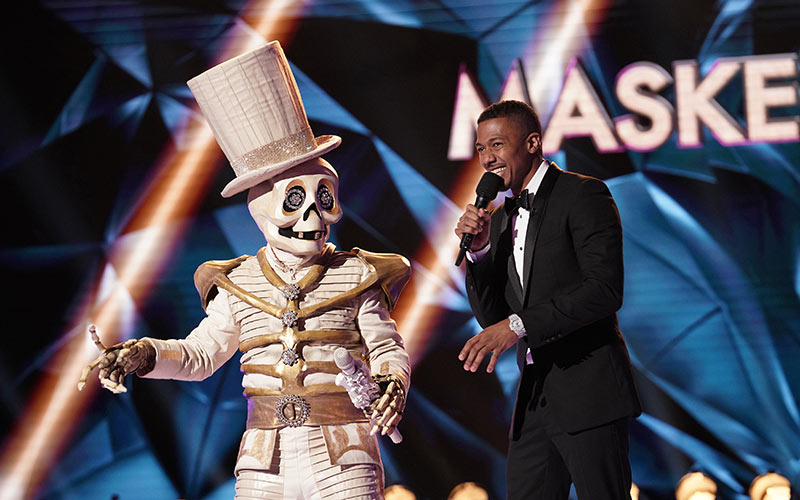 The Masked Singer season 2 contestant known as Skeleton with host Nick Cannon on the season premiere. (Photo by Michael Becker/FOX)

“Are you guys ready for some weirdness?” Nick Cannon asked at the start of The Masked Singer season 2’s premiere. The weirdness, though, in the form of Marina Toybina’s incredible, insane costumes, had mostly been revealed prior to the episode. (Thought: Fox should keep more of these a surprise next season.)

And by the end of the two-hour premiere—which was just two episodes back to back—two of the masked singers had been revealed: Olympian Johnny Weir and the gamer known as “Ninja,” aka Tyler Blevins.

The Egg was Johnny Weir, Olympic skater and commentator, which the judges correctly guessed. “We do like 45 seconds,” Johnny said after unmasking himself, referring to the brevity of the Masked Singer performances. He added, “to remember a whole concert, all those steps, all the lyrics, make sure your voice is right—so much renewed appreciation for singers and songwriters.”

Ice Cream was revealed to be Ninja, who talked his way through a performance of Lil Nas X’s “Old Town Road.” “I don’t sing,” he said after being unmasked. “I can play video games and compete in front of people, but no way dude, I do not do this.”

While season one had six characters on each episode, season two had just four, which will likely stretch the season out longer than season one’s nine episodes. It also slowed the pace of the episode a little, though with six performances and an unmasking, it still packed in a lot to one hour.

Fox changed the format slightly. Each episode had two sets of two performances. In each set, we met the two singers via a clip package with clues similar to last season, and then that person performed.

After two performances, the audience voted, and the contestant with the most votes advanced to the next round.

The loser went to a new duel round, which was called the “smackdown” round. In completely unrelated news, Fox will be airing the WWE’s SmackDown starting next week.

The smackdowns, a pseudo-battle, were actually fun and playful, with the singers trading off and playing off of each other a little, which was even more entertaining thanks to these wacky costumes. The first, which was Egg (Blondie’s “One Way or Another”) versus Skeleton (Otis Redding’s “Hard to Handle”)—was a lot more entertaining than the second.

That featured Ice Cream (Devo’s “Whip It”) versus Ladybug (Pat Benatar’s “Hit Me with Your Best Shot”), and just wasn’t as energetic or confident as the first smackdown.

While Nick Cannon promised tougher clues, a lot of the clues seemed really, really obvious, or at least narrowed the possibilities quickly.

The judges, well, they were the mostly the same as season one, though slightly less frustrating. There were still some ridiculous guesses, though not ones that were as off the wall as Megan Markle.

There were also quite a few pointlessly obvious observations. “She’s definitely a singer,” Jenny McCarthy Walberg declared at the end of a song that’d been performed from the very start by someone with an exceptional voice. Yep, that was almost as obvious as the fact that contagious diseases can be prevented by vaccines.

“I can’t wait to see how wrong we all are,” Jenny McCarthy said before the second Masked Singer contestant revealed their identity. While none of them guessed Ninja for Ice Cream, Johnny Weir’s name did come up during their discussion of Egg, so I’d say 1 for 2—not a bad track record for television’s worst judging panel on what remains America’s most absurdly addictive guessing game.