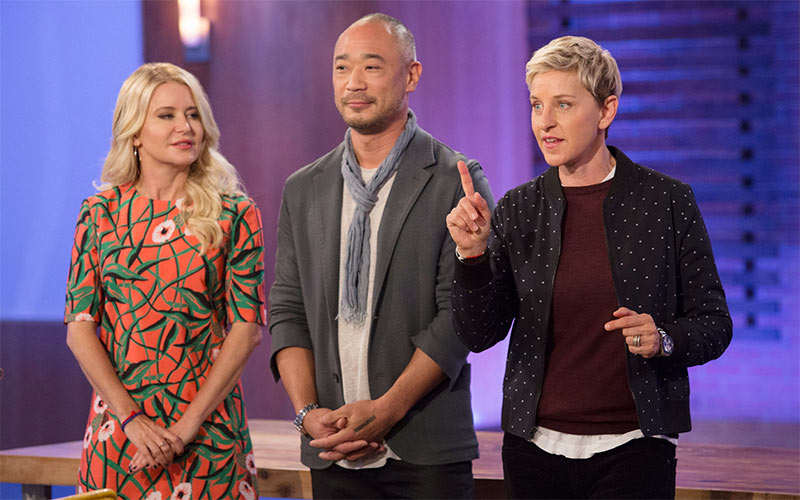 Ellen's Design Challenge season 2 judges Christiane Lemieux and Cliff Fong, with Ellen DeGeneres, who's bringing a version of the show back on HBO Max. (Photo by HGTV)

Two cancelled reality series—one broadcast docuseries, one cable competition—are being resurrected as part of HBO Max, though with slight changes. Both are executive produced by Ellen DeGeneres.

HBO Max, WarnerMedia’s streaming service that will debut next spring, announced that it was “ordering three original shows straight to series,” but two of those have essentially been on television before: Ellen’s Home Design Challenge appears to be functionally identical to the HGTV show Ellen’s Design Challenge, and First Dates Hotel is a version of NBC’s First Dates, an import from the UK.

The third series is an animated show for kids, but HBO Max is also developing another unscripted series with DeGeneres: Finding Einstein, which it describes as “an inspiring docu-series, blessed by the Einstein estate, that will seek out, celebrate and support a fresh generation of Einsteins,” people who “are motivated to live up to Einstein’s ideal of changing the world for the better.”

Ellen’s Design Challenge aired two seasons, in 2015 and 2016, and focused on the art of furniture construction, which was a new space for a reality TV competition.

Its contestants produced some really great work. However, it devolved into a mess of a show.

Besides weak judging and some transparently bad editing (with things like obviously fake reaction shots), the first season ended with its winner being disqualified for plagiarism, but not until after he’d already been declared the winner, and the editing of that was a complete hack job. (The disqualified winner, Tim McClellan, later talked to Ellen about it.)

The same production company, A. Smith & Co. Productions, is returning to produce the new season, which is now called Ellen’s Home Design Challenge.

HBO Max says that on its version, “design aficionado DeGeneres is giving eight forward-thinking designers the chance to push their creativity to the limit. DeGeneres will be on hand to weigh in on each challenge and provide humorous, colorful commentary.”

The new show may have a broader focus than furniture design, but this description makes Ellen’s regular presence seem to be the major difference from the HGTV version, on which she appeared but not regularly. And that choice perhaps leans the show slightly more—in aspiration, at least—toward NBC’s Making It, which was a success primarily because of its hosts, Amy Poehler and Nick Offerman.

One of the best reality shows of 2017 was NBC’s First Dates; my love for it was so strong that NBC created an advertisement out praise from my review.

They also cancelled First Dates after one season.

Before there was Netflix’s Dating Around, there was this charming, quiet show that essentially eavesdropped on people—of varying backgrounds and orientations—during their first dates.

Ellen DeGeneres was a producer of that show, too, though she was not part of the episodes in any way. Drew Barrymore narrated.

HBO Max is reviving that by using a spin-off format from the original Channel 4 series: First Dates Hotel. The twist is that, instead of a restaurant, dates take place in a hotel—with the potential of a second date. Here’s how Channel 4 described the series when it premiered in 2016:

“First Dates Hotel will follow blind dates with a difference in a romantically charged boutique hotel in the French countryside.

Here, the First Dates team are inviting guests still looking for ‘the one’ for a more intensive and tailor- made matching making experience. If you have ever reached the end of an episode of First Dates and thought ‘but I want to see what happens next!’ – then this will offer up the chance to find out.

This new series will include a brand new format where if the answer is ‘Yes’ their stay will be extended in romantic hotel and French countryside. And for some who don’t meet with success on their first date, they will be re-matched for a second chance at finding love.”

HBO Max will stream the original UK series—both First Dates and First Dates Hotel—and its version of the latter is basically the same as the UK one. Here’s its description:

“First Dates Hotel takes matchmaking to new heights. Based on the hit UK format devised by Twenty Twenty Productions, Ltd., this charming dating series set at an affluent boutique hotel will find single people from multiple generations gathering for an intensive and tailor-made romantic experience. After fun, amusing and potentially disastrous dates at the hotel restaurant, poolside and under the stars, if the potential lovers like each other, they can choose to stay on for a second date in the hopes of finding out if they’re ultimately a match.”