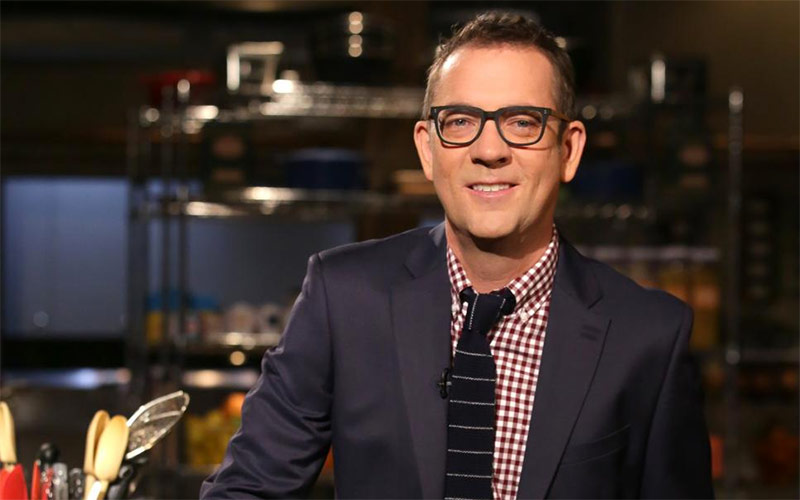 Food Network’s Chopped has been on the air for a decade now. It’s been a wild success as a show and a format, one that’s been imitated widely; I’ve often describes a show as Chopped for something else, such as theatrical make up or butchering.

The show’s format was actually inspired by another reality show—and that’s only part of its truly insane origin story. At Food Network’s request, its creators filmed a pilot episode that had all of the show’s current elements, just wrapped in a crazy Fox show package. The story comes via Aliza Rosen’s Reality of Reality podcast, on which she interviewed Chopped co-creator and executive producer Dave Noll.

There, he and development executive Michael Krupat would talk often about other shows’ formats. “Krupat and I are very similar in how we create shows: We are dissectors. We are people who break down existing formats and then try to rebuild them in other ways. We study games and board games and formats and foreign formats,” Noll told Rosen on the podcast.

“We talked a lot about—because we’re also very classy—so we talked a lot about the show ElimiDate, and how beautiful that format is,” he added. On that syndicated reality series, which premiered in 2001, one person went on a date with four others, and would eliminate them one at a time. “Mike and I became very obsessed with that format and how we could take—we were calling it a 4,3,2,1—into different genres,” Noll said.

At CityLights media, they pitched a true crime show with that format to Court TV, on which murder suspects would be eliminated one at a time throughout an episode.

Noll had to pitch Food Network executive Charles Nordlander, and told Rosen that “I had shows that I didn’t love.” He discussed this with Krupat on a phone call, and that’s when Chopped was born.

“Mike says the magic words: ‘What about a 4-3-2-1 but for food? What if it’s Iron Chef but four chefs?’ And in the next five minutes, that whole thing came to magical life,” Noll said, adding that while he didn’t know the proper name for a cloche, even that image came to him immediately: “the silver dome, before the commercial, he lifts it, and then you cut it—and it’s called Chopped!”

“Then Mike said, it could be appetizer, main course,” Noll added, saying that he immediately knew that he wanted Queer Eye for the Straight Guy co-star Ted Allen to host.

The only part of the format that came later in development was the basket of mystery ingredients. First, though, came a truly absurd idea from Food Network executives: turning Chopped into a Fox reality show.

Noll says on the podcast that, when he pitched Food Network’s Nordlander, he started by pointing out that, on Iron Chef, “by act three or four, it kind of gets boring, right? … So what I want you to imagine for a second is Iron Chef meats Elimidate.”

“Nordlander got it right away, but he did say, Look, I’m not sure how many competitions we want on this network,” Noll said. That was 2007 and is quite ironic in retrospect, considering what Food Network has become. Still, a pilot was greenlit.

“We took it back to our development team,” Noll told Rosen on her podcast. “And we’re like, okay: They want to go crazy, they want to go Fox, what do we do? So we had an unseen Mr. X, and Ted essentially—it wasn’t spoken—but Ted essentially played the butler or the head of the house.”

Mr. X was the “rich guy that you never meet,” but there was a member of his family that viewers would meet: his dog.

“The craziest part, which does go into history as one of the craziest—worst? I don’t know—but the craziest ideas, but Food Network loved it: When you’re chopped, the dog eats the food.”

Noll added that the dog eating the losing contestants’ food “was in the pilot. Rocco DiSpirito was our main judge. There [were] still three judges, in a mansion—still 4, 3, 2, 1. … It was the billionaire’s dog. And I remember watching the pilot going, I can’t believe where this has gone. This is the craziest thing. Maybe this is genius? And it did seem Fox, actually.”

When they actually saw the pilot, though, Food Network executives thought that was too crazy for them. “They came back and they were like, We’re definitely not doing this. They just passed. A hard pass. I had done enough TV at that point to know that you should go back.”

Noll and another executive went back a week or so later, and met with Food Network’s Bob Tuschman and Allison Page. “We knew the original idea was amazing. We had the confidence … let’s get them to do another pilot.” Noll added that, “I knew it was all good right away, because Bob had the original document, and he put it on the table and he said, I don’t get it: Why did you deliver this crazy show? What I wanted was this original show.” Noll said he told Tuschman and Page, “It’s what we wanted to do from the beginning! I’ll forward you all the e-mails going back and forth where your team is asking for a Fox show.”

Tuschman offered to do another pilot, but with a catch: Food Network would only pay for half of the costs. CityLights had been successful with other shows, so it could afford to do that, and thus they created a second pilot for Chopped, one that did not involve a dog, mansion, or butler Ted Allen.

The podcast’s host, producer and development executive Aliza Rosen, said, “I want, probably like a lot of producers, want to punch you in the face and high-five you at the same time,” because “it’s a no-brainer that everyone should have thought of, no one did but you guys, and you made it happen.”

Noll cited legendary game show producers’ Merv Griffin and Mark Goodson’s idea that formats should be straightforward and uncomplicated, but pointed out “that’s hard, because you’re going to a network executive, and you’re saying something simple,” Noll said. “What you get often is, Well, that’s too simple. Our audience is going to say... And you’re like, It’s not! Survivor is very simple, American Idol, America’s Got Talent…”

The conversation between Noll and Rosen has many more details, and goes on to discuss Chopped’s casting and the evolution of its production company. Listen here, or just subscribe to Reality of Reality on your favorite podcast app.