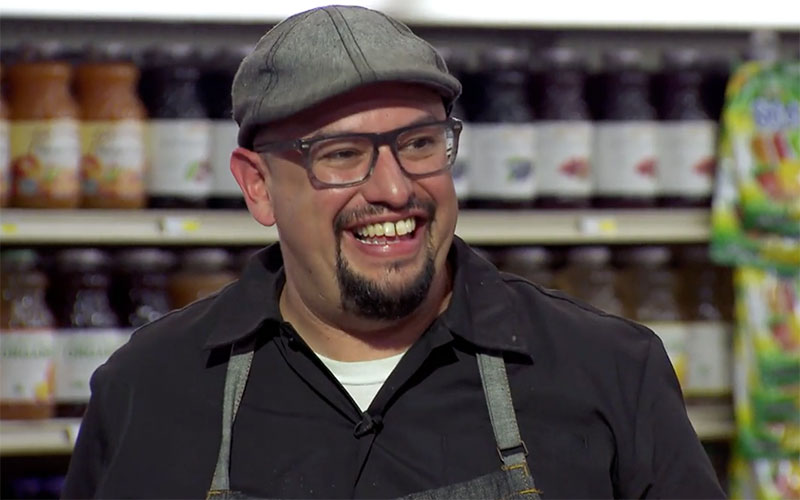 Update, Oct. 16: The Maryland Department of Health told USA TODAY that “the cause of death is atherosclerotic cardiovascular disease,” and that Carl died of “natural causes.”

WebMD says atherosclerosis is the “hardening and narrowing of the arteries,” and because it “silently and slowly blocks arteries, putting blood flow at risk … It’s the usual cause of heart attacks, strokes, and peripheral vascular disease.”

Guy Fieri first visited Carl and his then-wife Marie Ricco in 2013, at their restaurant Marie’s Italian Specialties on Diners, Drive-Ins, and Dives, and later brought Carl in on his Food Network shows.

Guy tweeted: “I’m heartbroken that my friend chef Carl Ruiz is gone. I have no words to describe what a great friend he was to me and my family. His ability to make me laugh and smile under any circumstances was only outshined by his talent as a chef.”

During the Guy’s Grocery Games Triple D Championship in 2016, which Carl ultimately won, Carl said, “If I didn’t meet Guy 10 years ago, I wouldn’t have two restaurants, I wouldn’t have my whole family—Robert, Marie, Michelle—because Guy made me realize you can have a family and still be crazy. I love the guy: he saved my life.” He added, “I wouldn’t have any of this if Guy Fieri didn’t keep me on the straight and narrow.”

Among the many remembrances from friends and colleagues was fellow GGG judge and Iron Chef Alex Guarnaschelli, who tweeted, “This man was somehow fatherly, comforting, wise, reckless, brilliant, wickedly funny & unique all in 1. My life will be lonelier without him. Love you Carl. I’ll make sure no one puts pineapple on pizza best I can without you here.”

“On behalf of the La Cubana family, with heavy hearts, we are deeply saddened to share the passing of our beloved Executive Chef Carl Ruiz. No words can fully express our sadness at the sudden loss of our dear friend and brother. Beyond his immense culinary talent, Carl’s larger-than-life personality never failed to entertain, enlighten, and uplift every person he encountered along his #Ruizing adventures. His fierce intellect and infectious humor knew no bounds. He was a mighty force of down home Cuban cuisine, and lived life to the fullest, just as he cooked—with “dancing always” as the most important ingredient. Here at La Cubana, Carl paid proud tribute to his Cuban roots each night, and it is here that Carl’s legacy, undeniable spirit and passion for his culture will live on. We hope we make you proud, Carlito. .

To honor the work you loved so much Chef, La Cubana will continue your work in establishing The Carl Ruiz Scholarship Foundation for aspiring chefs.