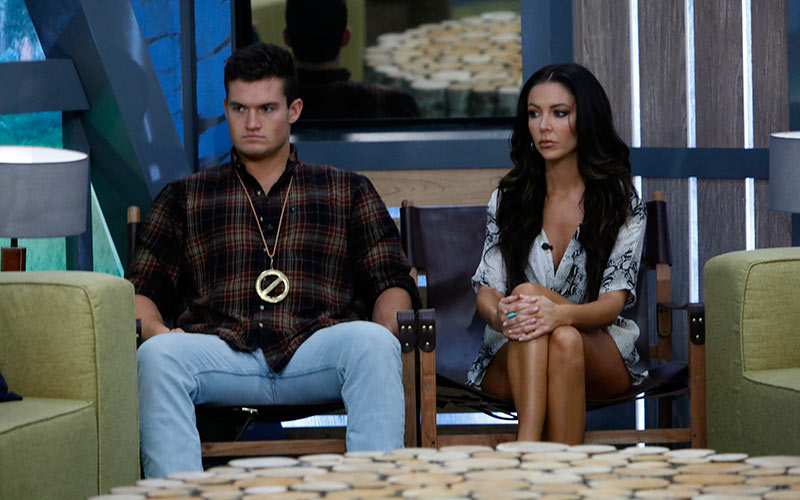 Jackson Michie made the case for his win during Big Brother 21’s finale by saying, “I came here to play Big Brother and I have done that: I’ve thrown rogue votes, I’ve been punished, I’ve been a have-not, I’ve been on the block three times, I’ve taken myself off twice. I’ve won 11 competitions: 13 between us, 11 of them are mine, four HOHs, four vetos,” and said he was “impossible to evict.”

That turned out to be true, as he won the jury’s votes and $500,000, beating Holly. But he also left the house looking dejected, as if he’d lost: he didn’t smile or cheer, he just leaned forward and put his hands to his face. When he walked out into the confetti he’d been referencing all season, he hugged Nicole with a flat expression. Earlier, both the jury and Julie Chen had confronted Michie with fragments of his own behavior, which was consistently awful.

During the jury Q&A, which came off as so produced Allison Grodner might as well have just read the questions herself, Tommy read this pre-written, carefully phrased question off a card: “Michie. Some of the women on the jury feel that you were degrading and condescending to them at times. We agree that you played a great game. But we’re not sure that we should reward that type of behavior. We want to give you this opportunity to prove otherwise.”

“I’ve never at any point disrespected a woman’s character, or her physical appearance, or in any way demoralized her as a person. I do get amplified; I do care about everything that I do, and I’m very intense. I’ve never made anything personal with anyone, male or female. I respect women more than anything. I love my mom to death and she raised me right, and at no point have I ever wanted to come across as degrading. I know myself and I know that I get worked up and I’m working on it. But at no point—in any argument, ever—did I ever let things be made personal or make jokes or make slanderous remarks toward any woman, ever.”

There’s so much to unpack there, like the way he focuses on how he’d be perceived (“at no point have I ever wanted to come across”) rather than his actual actions.

And there’s so much evidence to the contrary, like the time Michie was in the shower and ranted, “Fucking Jessica. Jessica, go play in traffic with that fucking body. Go back to Mexico—go back to your fucking sequester house.” Jessica Milagros, a plus-size model, is from Oak Park, Illinois, a suburb of Chicago.

For more of Jackson Michie and others, this Twitter thread gathered “problematic/racist behavior” this season.

Hamsterwatch—who has watched and documented the live feeds all season, and who previously called Jackson “a misogynist pig”—wrote this in her final assessment:

“One of the most problematic hamsters ever, he said many things he shouldn’t have, especially about David, and he let slip he had a myriad of life issues that should have DQd him from ever getting on the show. But he did, and he won plenty of comps to keep him on it til the bitter end. He got with Kat before feeds, then dumped her and claimed she was ‘a burden’ before shifting to Holly. He told Jack she was his new ‘game piece’ and he was proud of being the first to bed two girls on the same season. He tried to dump Holly a couple times but it didn’t take and they stuck to the end, with many sexcapades along the way, many of them involving the shower sex stool shared by Jack and Analyse. All this while worrying about how he was being ‘portrayed’ and ‘perceived’—please. “

While many Big Brother viewers and fans have been vocal about their disgust about what’s happened this season, it is by no means a consensus. Just look at some of the responses to my tweet reacting to Jackson Michie’s win; he has plenty of fans and defenders who criticized the show for what happened during the live finale.

And of course, people who just watched the TV show wouldn’t be aware of most of this, because the editing of Big Brother 21 really worked in Jackson’s favor.

Nicole—who won the fan-favorite award—was voted out first after Michie won the final HOH and voted her out, keeping Holly Allen.

After the jury voted, however, in the final 20 minutes, Julie Chen Moonves brought up several moments from this summer, noting that, because of the live feeds, “things that happen in the house can become very controversial.”

I will give CBS credit for using a part of the finale to include a few fragments of what happened during this toxic season of Big Brother, though it’s kind of like pouring gasoline all over a house, lighting a match, and then three months later, turning on a hose. That’s not exactly worthy of a medal.

What happened in a single, rushed segment on the live finale also doesn’t qualify as meaningful discussion: Julie Chen blindsided Jackson, demanded an immediate response from Kemi, and moved on. Obviously, time is limited in a 90-minute finale. It is not, however, as limited in a 99-day reality show that airs three hours every week. Could this have been directly addressed earlier? Yes.

It was not, because CBS chose not to. They chose instead to continue generating as much cash as possible from this inexpensive but popular series.

Before the finale, The Los Angeles Times reported on Big Brother’s history of racist behavior, and reporter Greg Braxton tried to follow up about CBS executives’ promise that they’d “take a look at the show” after the season concluded.

Braxton asked CBS executives for comment and details, and received nothing except the same empty statement that CBS copies and pastes every time something wretched happens on Big Brother, though with this season’s addition that says “there is absolutely no truth that the casting of the show is racially motivated, that the Houseguests’ behavior is predetermined or that the outcome is controlled in any way.”

“On the eve of the finale, Kahl and other executives declined to comment on what further areas they would be exploring or whether they would reexamine the show’s casting formula or vetting process. They also refused to provide specifics as to whether the show had any minorities on its producing staff, or why the series has never had a cast in which a majority of participants were people of color.

Instead, CBS and production companies Endemol Shine North America and Fly on the Wall Entertainment released a joint statement…”

That is such a pathetic, cowardly cop-out from a public corporation that uses public airwaves to broadcast this cesspool of awfulness. Just say: This show makes us so much money that we really don’t care what happens, who is hurt, or how that kind of toxicity bleeds into society, as long as we get paid.

On the finale, Julie Chen Moonves’ discussion started with “bullying,” and eventually Julie asked Michie about his decisions to banish Kemi, David, Jessica, and Cliff by attributing it to “some viewers.” She gave Michie’s rationale for his day-one banishments and then said, “but some viewers thought you did it because Jessica, David, and Kemi are minorities and that you chose Cliff because he is the oldest houseguest. What would you like to say to your critics?”

Michie—who said, “whoa” and physically moved backwards when Julie mentioned “minorities”—responded by saying, “absolutely not. I’m not racist, and this was a decision—the only time Kemi ever talked to me was when I was showering, she was brushing her teeth, and this was all based on first impressions.”

I think he stumbled into the answer there: first impressions. Was he being explicitly, intentionally racist? Probably not! Was this implicit bias at play? Very possibly—especially considering he’s far from the first CBS reality contestant to target the people who stand out for their differences (frequently, that’s been people of color).

David said: “I came to the conclusion that it was game play, just based on the evidence that I saw, but since I’ve been watching the show and watching behind the scenes, said behind doors, you and Jack included, there seem to be some implied biases.”

Earlier, when Julie mentioned the way Jack, Jackson, Christie, and Nick targeted Kemi, Kemi said, “It was extremely disappointing. Jack, Jackson, Christie, and Nick, I’m not exactly sure what your obsession is with me, but I hope that when you get to watch footage back from the season, you understand why it was received the way that it was. A lot of the things that were said to and about me, and several of the other houseguests, are completely inexcusable and unforgivable, and I hope that you can leave this experience better people than you came in as.”

Jack, who was already confronted with this when he was evicted, apologized to Kemi—and also actually owned his behavior, which was a welcome surprise. He admitted that what he said “came from a place of ignorance, and I’ll never be able to apologize to you enough,” and added that it was “no reflection of any type person that I want to be, and it’s not fair to you.”

Christie first said she couldn’t apologize because “I specifically don’t know what was said,” then blamed her behavior on hormones and also “the heat of the game,” and then ended up apologizing.

I don’t know why we have to keep discussing this, but “if I offended you” is not an apology. It is not an acknowledgement of wrongdoing. It does not allow for the possibility that the thing that happened was not okay. It instead blames the victim for their reaction.

Julie Chen Moonves decided that counted as an apology and demanded a quick answer from Kemi: “Do you accept the apology as you heard right here, Kemi?”

Kemi’s response was perfect, and the perfect way to end this season. She said, “I think it’s important to understand what you’re apologizing for before you apologize.”

Does Jackson Michie understand that? Do Big Brother executive producers Allison Grodner and Rich Meehan? Does CBS? And more importantly: Will they actually do anything about it?